St Helens chairman Eamonn McManus has hit back at speculation linking Ben Barba with a return to the NRL and insists his star fullback is going nowhere.

Barba has been sensational for the Super League leaders this season after arriving in the UK a year ago following an ill-fated stint in French rugby. 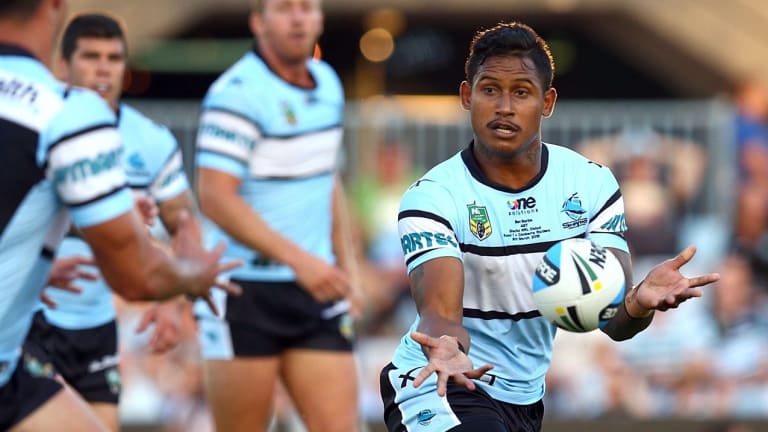 Ben Barba in action for the Sharks.

Barba was forced to rebuild his career overseas when he was slugged with a 12-game ban by the NRL after testing positive for cocaine following Cronulla's 2016 grand final success.

The 28-year-old former Canterbury and Brisbane star is the red-hot favourite to win the Super League's Man of Steel award and has flourished under former Sydney Roosters under-20s coach Justin Holbrook.

Those performances haven't gone unnoticed back in Australia and on Sunday, Cronulla coach Shane Flanagan said he'd welcome Barba back with open arms.

But McManus said the Queenslander is thriving being out of the Sydney rugby league goldfish bowl and is angry at what he believes are efforts to unsettle his player.

"I keep reading these reports than Ben won't be here next year and to be quite honest, it is a little bit annoying," McManus said.

"He is midway through a two-and-a-half-year contract and he and his family have settled in the area very well and really embraced the town, the people and the club.

"Whenever you sign a player from the NRL there is a risk involved, so Ben's was no different to any other signing we've made over the years.

"But he is a lovely lad, very quiet, very humble and is very much a family man who keeps himself to himself.

"The fans love him and he has taken them into his hearts. This is a very working class town and the people are very down to earth and he enjoys that environment."

Barba's form has been on par with his exquisite displays for the Bulldogs when he won the Dally M Medal in 2012 and he tops the Super League try-scoring chart with 18 in just 14 appearances.

He was inspirational again this weekend in Saints' 38-18 win over Widnes at the Magic Weekend event, scoring once, setting up two tries and preventing another with a fantastic goal-line tackle.

McManus believes the less defensive-minded approach of Super League is well suited to Barba who he says has given no indication of wanting to leave.

"Obviously he will return home at some stage, but he's under contract for next season and has a fantastic relationship with our coach Justin," he said.

'He's got a lovely family and the children are settled in at school.

"We've had some fantastic Australians who've served this club with great distinction such as Jamie Lyon and Mal Meninga,

"Ben is right up there with them."