PORTLAND, Ore. — This has been a postseason of sacrifice for Stephen Curry — off the court. Such is the lingering severity of the recently dislocated finger on Curry’s left hand that he hasn’t played golf on a single off day.

That is no small concession for Curry, either. Sneaking away to a nearby course for a few hours between games on the road, typically accompanied by his Golden State Warriors teammate Andre Iguodala and the front-office executive Jonnie West, is Curry’s go-to move for recharging himself mentally.

Yet it turns out that Curry is doing just fine on the floor without two healthy hands or the usual retreats to his favorite sanctuary. An injury that hampers his ability to grip a golf club could not prevent Curry from uncorking the most dominant playoff series of his career in the Western Conference finals.

In the process, Curry didn’t merely hush a legion of naysayers regularly critical of his postseason play. He also reminded us just how much of the Warriors’ offense he has surrendered over the past three seasons, without complaint, to accommodate Kevin Durant’s one-on-one brilliance.

With Durant forced to miss this entire series with a strained calf, and a historic fifth consecutive trip to the N.B.A. finals on the line, Curry turned back the clock to score 36, 37, 36 and finally 37 points in a four-game sweep of the Portland Trail Blazers. In Monday night’s 119-117 overtime triumph to finish poor Portland off, Curry teamed with Draymond Green to deliver a decisive pair of triple-doubles, something no two teammates had ever done in the same N.B.A. playoff game.

“We’re a superteam for a reason,” Golden State’s Klay Thompson said, paying tribute to Curry, Green and everyone who fell in line behind them as the Warriors erased a double-digit deficit for the third straight game.

When the comeback was clinched, Curry shared two warm embraces and exchanged jerseys near the scorer’s table with his younger brother, Seth Curry, whose Blazers couldn’t hold a 17-point lead this time.

“I’m glad it’s over,” Dell Curry, Stephen and Seth’s father, said wearily as he leaned against a wall outside the Golden State locker room.

Watching their sons duel for a spot in the N.B.A. finals proved more stressful than Dell Curry and his wife, Sonya, ever imagined. But Dell, himself a 16-year N.B.A. veteran, couldn’t refrain from marveling at Stephen’s consistency in leading Golden State, down two injured starters, to a fifth consecutive finals.

All this started, remember, with 33 points in the second half of the Game 6 clincher at Houston, after Stephen Curry was scoreless against the Rockets in the first half in Golden State’s first full game without Durant.

“Steph’s bar is so high that I don’t know if anything he does is ever enough,” Dell Curry said, referring to those in the news media who questioned whether the Warriors could really cope without Durant.

“He played like a superstar tonight and this whole series.”

Warriors Coach Steve Kerr was clearly taking no chances in a closeout game in which the visitors, beyond missing Durant and DeMarcus Cousins, also had to cope without the injured Iguodala (calf). 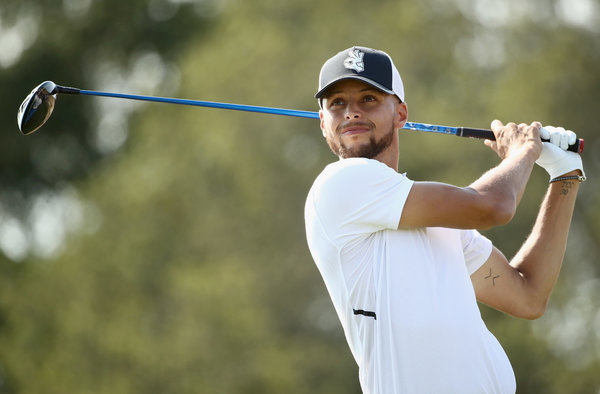 The Warriors likewise had to overcome the game of Meyers Leonard’s life — Leonard pumped in 25 of his career-best 30 points by halftime — and break a season-long overtime hex. Golden State had somehow been winless in all six of its previous overtime games and wasn’t safe in this one until Damian Lillard (28 points and 12 assists while hampered by a separated rib) missed a contested 3-pointer from the right corner that could have won it for the Blazers.

Curry gave a hint of his determination to avoid a Game 5 by ringing up 8 points in the final 30 seconds of the first half to match Leonard’s total of 25 by intermission. Then, late in the extra period, assist No. 11 came when a swarmed Curry found Green on the right wing for Green’s only 3-pointer — good for a 119-115 lead.

“Draymond is just a big-game player and Steph trusted him, and that was obviously the shot of the game,” Kerr said. “They are kind of made for each other from a basketball standpoint.”

So make that 10 consecutive postseason wins over the Blazers — and a spot alongside the Bill Russell-led Boston Celtics of the 1950s and ’60s as the only teams in league history to reach five successive finals.

Curry’s sterling résumé still lacks a finals M.V.P. trophy, yet it’s clear that the dislocated finger he sustained against Houston early in the last round won’t be the obstacle that stops him at the fifth attempt.

As the Warriors’ spiritual compass, Green will be a worthy contender, too, should the Warriors manage to win their fourth title in five seasons. Durant, of course, was widely hailed as the best player in these playoffs before his scary setback and could conceivably make it back to work in the next round. Golden State, after all, just bought itself nine days of rest before the finals begin May 30 against the Milwaukee/Toronto winner.

None of that, though, should detract from the fact that Curry has been better than ever since Durant went down, amid the pressure of keeping a dynasty in operation and no shortage of uncertainty about the Warriors’ future thanks to Durant’s impending free agency.

Portland’s roster has too many holes compared to Houston’s, Milwaukee’s or Toronto’s to waste too much time pondering the debate du jour about Durant and whether he’s a luxury or a necessity for Golden State as it chases a three-peat. Neither the Bucks nor Raptors figure to be as vulnerable to conceding big leads, so leave that one for the morning TV talk shows.

The smarter declaration, after watching Curry’s backcourt play alongside Thompson keep Lillard and C.J. McCollum firmly in their shadow, is proclaiming Steph to be the league’s ultimate team-first franchise player.

“It starts with him,” Iguodala said of Curry. “More than anything, he always has good intentions.

“DeMarcus came in and was here for a couple months and he told Steph, ‘Bro, you are the most regular superstar I’ve ever seen — and that’s a compliment.’”

There’s little doubt that the load Durant carries (when healthy) has enabled Curry to be fresher for his late-season exertions than he’s ever been — hand injury aside. Yet it was repeatedly evident against the Blazers that A) Portland still has little answer for Golden State’s size and pace and B) many of us have undersold the selfless manner in which Curry has dialed back his offense when needed to prioritize Durant’s comfort level.

After Golden State’s Game 3 comeback at Moda Center, Curry openly lamented how much he misses golf these days, responding glumly to a question on the matter with a one-word confirmation: “Facts.”

Said Iguodala: “Some people say we play too much, but there’s no such thing. We’ve actually found something that we can get mentally engaged in away from what causes all the stress.”

Rest assured that the Warriors will never take issue with their hobby when Curry is back swinging his woods and wedges — grateful for everything their incomparable point guard has routinely ceded on the court in the chase for more championships.