It's been less than a week since a podcast aired in which Golden State superstar Stephen Curry said he didn't believe the United States had landed on the moon. Now the Warriors guard is using everything short of rocket boosters to walk back those remarks. On Saturday came his latest effort, an Instagram Live conversation with someone who has plenty of firsthand experience with space: retired astronaut Scott Kelly.

"I'm genuinely sorry for how that came across and I want to use this as an opportunity for some positivity," Curry told Kelly, who spent 340 consecutive days aboard the International Space Station in 2015 and 2016, a period of time in orbit that physically changed his DNA. 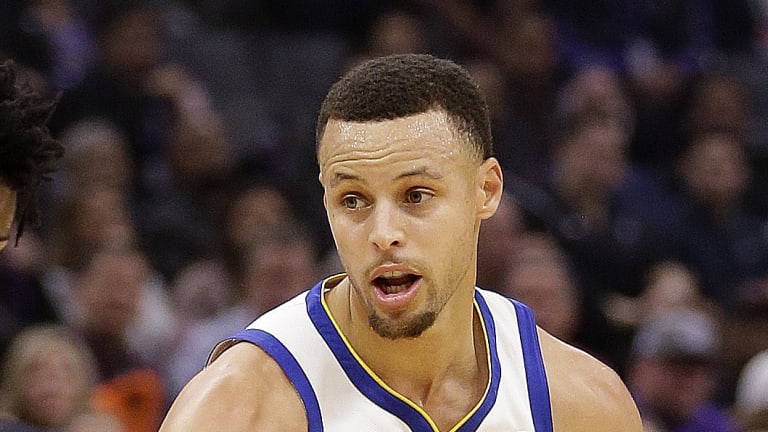 Stephen Curry interviewed an astronaut after his comments about the moon landing.Credit:AP

"When people believe [flat Earth or moon landing conspiracies]," Kelly told Curry, "they believe the other things that are more important like climate change not being real or vaccines and 9/11 being a conspiracy theory."

The two used the cordial conversation mostly to harp on the importance of scientific literacy, but also talked about how Kelly became an astronaut, his year in orbit and NASA's lunar lab.

Before Saturday's live stream, Curry had already accepted an offer from NASA to visit the lunar lab at the Johnson Space Center in Houston. He also gave an effusive interview to ESPN insisting his statement was a joke and that he'd take time to learn about NASA's accomplishments and man's history of space exploration.

"But in terms of the reaction that I've gotten, I am definitely going to take [NASA] up on their offer. I am going to educate myself firsthand on everything that NASA has done and shine a light on their tremendous work over the years. And hopefully people understand that education is power, informing yourself is power."

In a game Friday night, the Sacramento Kings played video of astronauts walking on the moon during Golden State player introductions to make fun of the Warriors' guard.

The comments on the podcast were a shock coming from Curry, who has often engaged on political and cultural issues in a perceptive manner. That persona was back on display in the informal interview with Kelly.

Curry hinted that his visit will likely come in mid-March, when the Warriors with be in Houston for their regular season finale.

"I think you can expect a great reception," Kelly said.