Stewart, regarded by many to be in All-Australian contention this year, will be a Cat until the end of the 2021 season at least. 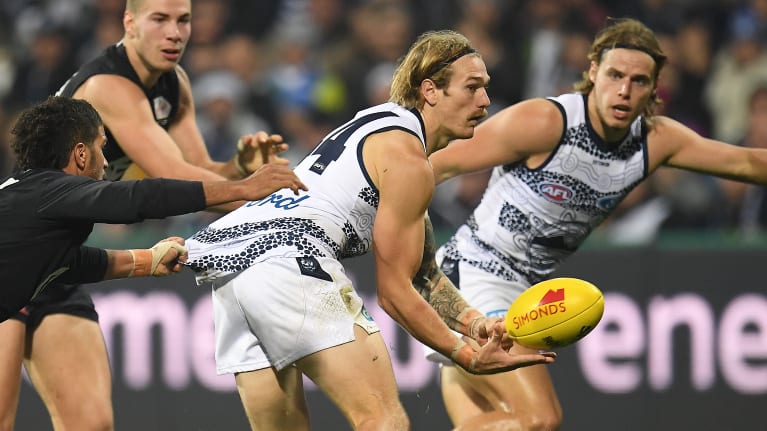 Tom Stewart has signed a new deal with the Cats.

Joining Stewart at Kardinia Park for the next three seasons will be youngsters Lachie Fogarty and Charlie Constable.

Irishman Mark O’Connor has also agreed to a new one-year deal that ties him to Geelong until the end of 2019.

Stewart has enjoyed a meteoric rise through the ranks. After a successful career with South Barwon in the Geelong Football League, he joined Geelong’s VFL team in 2016 before being drafted by the Cats later that year as a mature age recruit with pick 40.

Since joining Geelong, the 25-year-old has played 31 of a possible 35 games and finished fifth in the club’s best and fairest last year.

“I’m very grateful to be in the position I’m in, playing at this fantastic club,” Stewart said.

“There was absolutely no hesitation to sign and I was very proud when they (the club) came to me with the extra couple of years.”

Fogarty and Constable were picks 22 and 36 respectively at last year’s draft. The former has already made his debut this year, playing seven games to date and averaging 14 disposals.

Meanwhile, O’Connor, originally from county Kerry in Ireland, has played three games since being taken as a category B rookie in 2016.