Storm close out injury-ravaged Titans in brutal encounter in Brisbane

The Gold Coast Titans almost had to see if anyone in the crowd had the boots in the back of the car as they endured a horrid injury toll before finally succumbing 28-14 to the Melbourne Storm in a brutal clash at Suncorp Stadium.

Halfway through the first game of the double-header, Garth Brennan must have considered knocking on the Manly or Broncos door to see if any of their players wanted a quick cameo before their turn on the park. 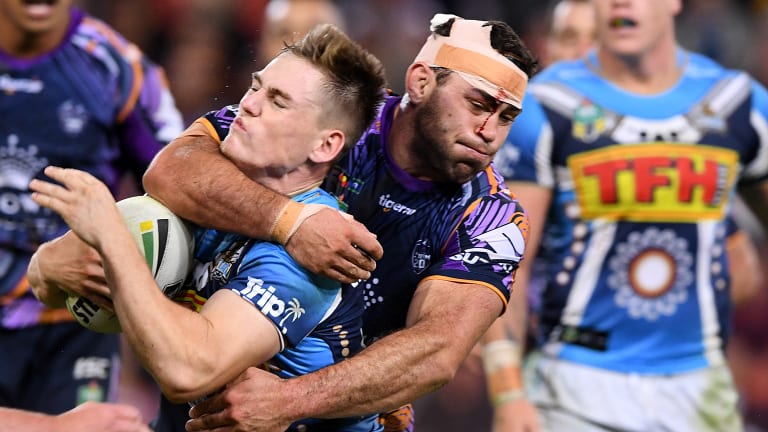 Thunderstruck: AJ Brimson of the Titans is hit by Dale Finucane of the Storm.

At one point in the second half, they were without a workable player on their bench, with Kevin Proctor the most concerning injury moving forward after a potential groin tear. Titans officials were less than impressed with Cameron Smith's potential wishbone tackle in the lead-up to the injury but there was no action taken on the field.

Will Matthews (concussion) left the field early in the second half and didn't return, while Jack Stockwell was to join him after a shocking head clash with Dale Finucane that turned off the lights before he hit the deck.

Jarrod Wallace looked as if he would be gone for the evening after his head was slammed on the turf but despite wobbling around the field, he was somehow able to return for the closing stages.

And Keegan Hipgrave was described by commentators as being borderline crazy when he returned to play with a wrist injury that was reported as a potential fracture.

The Storm fared far better despite losing halfback Ryley Jacks (HIA) for the second half and ending the night with 12 men after Christian Welch was justifiably sin-binned for holding back Titans five-eighth AJ Brimson as he chased his own kick.

It was a calculated risk but managed to pay dividends. Trailing 22-14, the Titans swung it wide to try and catch the outmanned Storm out on the edges. Ash Taylor's pass was called forward and not long after, Josh Addo-Carr bagged try number 12 for the season to wrap up his club's sixth win of the season.

It had looked like a straightforward night for the Storm when they scored through Curtis Scott after just four minutes. He cut through the Titans defence with frightening ease and it could easily have been the start of a rout. 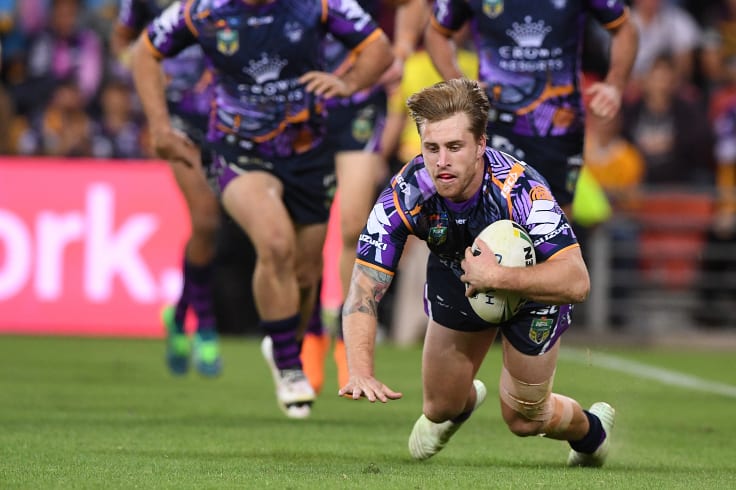 Cameron Munster of the Storm scores a try.

Instead, with Taylor pulling all the right strings, the Titans scored the next 14 points to boast a six-point lead at half time and give themselves every chance of yet another upset, in a season already leaving footy tipsters to resort to the dart board technique.

The Proctor injury on the 50-minute mark was the beginning of the end for the Gold Coast. He was visibly upset when he returned to watch from the bench and initial signs were hardly promising for the Kiwi backrower.

Wallace took a heavy knock and was bumbling around in the middle of the field when Felise Kaufusi scored on the right edge to level scores at 14-14 and put the Storm right back in the game.

From there, the Titans were dropping like flies. Whenever someone managed to return, another seemed to be on his way off the field. They did exceedingly well to hold on as long as they did and may have sprung the upset if they remained in good health.

Melbourne fared far better on the injury front but were also able to close it out when the game was still in the balance, even without their first-choice number seven in action.

Addo-Carr would put on the finishing touches to give Melbourne their fourth win in five weeks and ensure he continued to be front and centre at the NSW selection table.