Melbourne Storm coach Craig Bellamy has let rip at the “squeaky clean” Sharks in a fiery preview to their preliminary final at AAMI Park on Friday night.

The Sharks have fired barbs at the Storm throughout the week, starting with coach Shane Flanagan telling media his side would target Cameron Smith and Billy Slater and they wouldn’t take it if the Storm tried to wrestle with them. 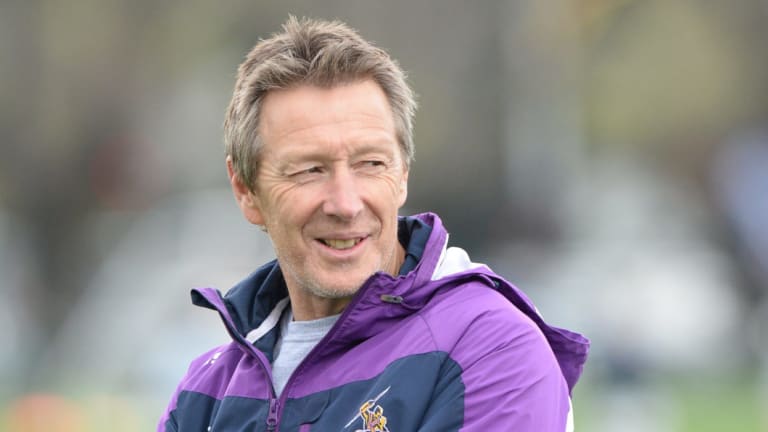 Not buying it: Craig Bellamy has reacted with scorn to comments coming from Cronulla.

Sitting back in Melbourne, Bellamy bristled at the comments and the thought of the Sharks portraying themselves as good boys after a recent history of on and off-field dramas and bad behaviour.

Bellamy dared the Sharks to target Smith and said the rest of the NRL would be laughing at the Sharks for their comments.

“The Sharks say they are going to go after Cameron Smith. Well what else is new?” Bellamy said on Thursday.

“Everyone goes after Cameron Smith but Cameron, like Paul Gallen, hasn’t played nearly 400 NRL games without getting through while getting targeted in games.

“I’m sure he will handle that OK and it will give us a couple of opportunities in other situations if they want to go out and focus on Cameron all night.

“But I don’t think the Sharks are like that. They are telling us we are the grubs and they are holier than thou, the squeaky clean Sharks – please, give me a break.

“Each individual just getting their role done, their job done, and as a team we have a plan we want to stick to.”

But while their coach is bristling at the Sharks and their antics, the Storm players have been told to keep their poise.

The club has also been training all week with their markers standing out of position to mirror the Sharks and their defensive tactics during games.

“It doesn’t needle us but the other clubs in the competition sit back and laugh at that, saying we are the grubs and we do this and we do that,” Bellamy said.

“We know what we have to do. As they have kept telling us all week we are very tough, very disciplined, no I mean very experienced team.

“Disciplined? I’m not quite sure about that.”

Bellamy is still mulling over his final selections as he waited on some injured players, although it is likely prop Nelson Asofa-Solomona will take his place in the side after an ankle injury while star centre Will Chambers is set to return from a three-game suspension.

“It’s not ideal coming into a prelim after not playing for a month,” Bellamy said on Chambers.

“He has been training hard in his weeks off so hopefully he will be OK. He will be better for that experience and he has played in a lot of big games as well.

“Hopefully he has learned from a couple of games this year where he has been suspended, we don’t need that from him, we need him to get out there and get his job done and be aware of when the right time is to do certain things and when it’s the wrong time.”

Retiring great Billy Slater will play his last game in Melbourne hoping to set up a grand final farewell.

Veteran forward Ryan Hoffman was named on the Storm bench, but it remains unclear if he will play or if utility forward Brandon Smith will be among the reserves. 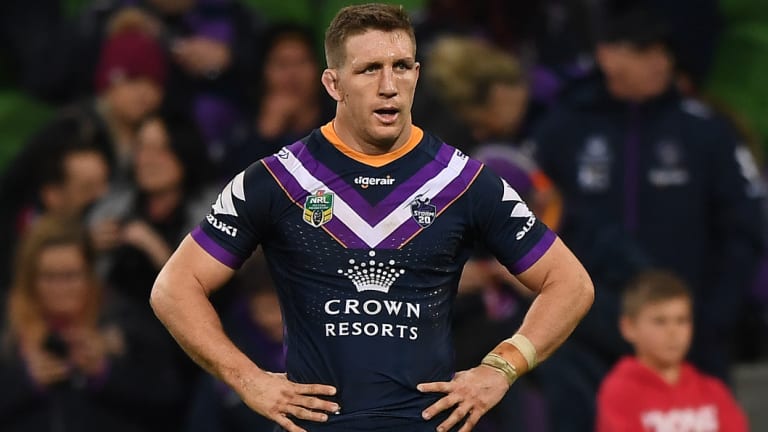 Contemplative: Bellamy has a big call to make with retiring veteran Ryan Hoffman.

Hoffman was left out of the qualifying final and Bellamy admits it remains a tough decision to decide what to do with Hoffman, who is retiring at the end of the season.

“It has been tough,” Bellamy said. “It was certainly hard to leave Hoff out for what he has done for our game and our club.

"It’s not easy at all and I know with him coming to the end of his career what it means to him, but I’ve got a job to do and I have to do my job the best I can as that’s what I expect from the players.

“It’s part of what we have got to do and it certainly wasn’t be easy.”

The Storm play the Sharks at AAMI Park on Friday night with a crowd of around 25,000 expected.