Curtis Scott faces three games on the sidelines after being issued with a grade three striking charge by the NRL during a furious 52nd-minute brawl in the Melbourne Storm's defeat by Manly on Saturday night.

Storm centre Scott was the first player sent off in the NRL since 2015 when he was given his marching orders after a flurry of punches thrown at Dylan Walker. He can reduce the sentence to two matches with an early plea. 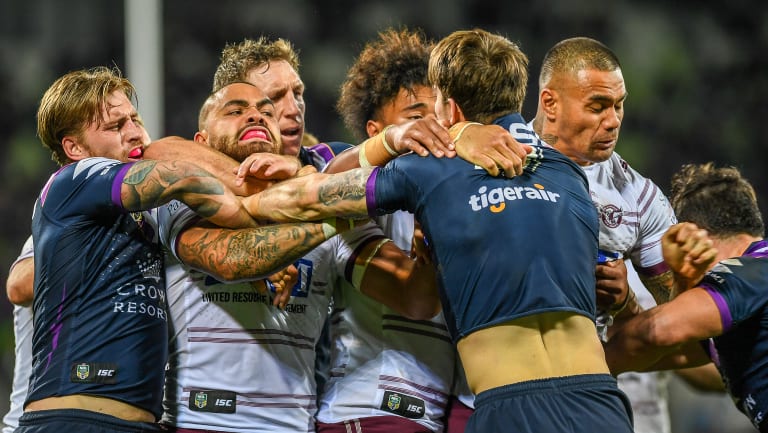 Walker, sporting an almost instant swollen black eye, was also given 10 minutes in the bin but has not faced any further charge.

He will however spent at least six weeks on the sideline after it was confirmed that he had a fractured eye socket.

The Sea Eagles' Apisai Koroisau, whose flying punch connected with Scott in the same brawl, faces a grade one striking charge, which carries a base penalty of two matches, although that can be reduced to one with an early plea.

Nelson Asofa-Solomona was also charged for a careless high tackle on Jake Trbojevic, which carries a $1500 fine if found guilty (or $1100 with an early plea).

Earlier on Sunday, the Storm released a statement from Scott via Twitter showing his remorse for the incident.

"While it doesn't change what happened last night I would like to deeply apologise to my team, Manly and NRL fans for my actions. Not how I want to represent myself, my team, or the game," he said.