Brisbane Roar coach John Aloisi reckons the shortage of Australian strikers getting A-League starting opportunities is a "massive issue" for the Socceroos as they begin life without Tim Cahill.

Aloisi may well end up providing new coach Graham Arnold with one of his best options up front after recruiting former Socceroo Adam Taggart from Perth Glory for the upcoming season. 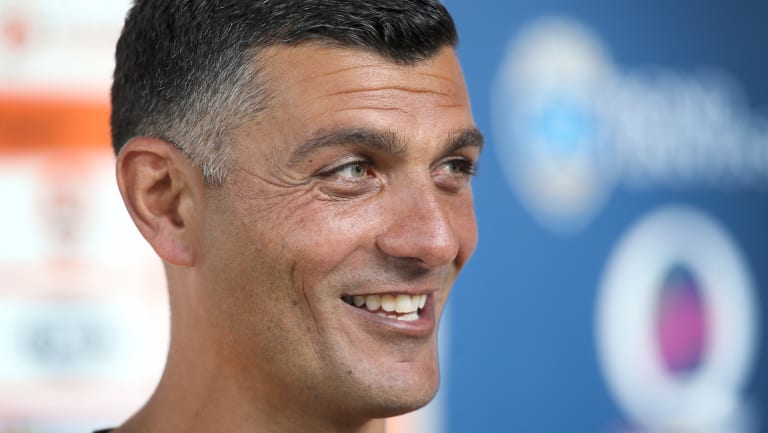 Worried about the future: John Aloisi.

Taggart, 25, is a rare case in the A-League – almost every other club has an import starting at the point of attack, which Aloisi believes has contributed to the country's failure to develop a reliable goal-scoring striker to succeed Cahill.

"It's a massive issue, and I made it known during the World Cup that we lack strikers, we lack goal scorers," Aloisi told reporters on Wednesday.

"I believe in young Australians and that's why with Jamie Maclaren, the opportunity was here for him when he was here.

"The same thing with Taggart.

"I've always kept an eye on him because I believe in young Australian strikers, but they need to be playing regular football and scoring goals and hopefully our national team ends up getting the rewards as well."

With Cahill retiring from international duty, Arnold will need to look closely at his striking options for the January's Asian Cup.

The Socceroos failed to score from open play at the World Cup in Russia and clearly lacked a cutting edge in attack.

Taggart, a proven quantity in the A-League, can propel himself into calculations with a good start to the new A-League season.

"It's always refreshing with a new era of a gaffer in the national team," said Taggart, who was part of Australia's squad at the 2014 World Cup.

"There could be a lot of fresh faces given there's a fresh manager in there.

"Obviously I want to do the best I can do to get back to the national side.

"Everyone's on their own journey and mine has led me to here. I'm going to make the most of what I can here and that's the only thing you can focus on really.

"If you can do that, you'll get those opportunities, and they seem to follow you rather than you chasing them."