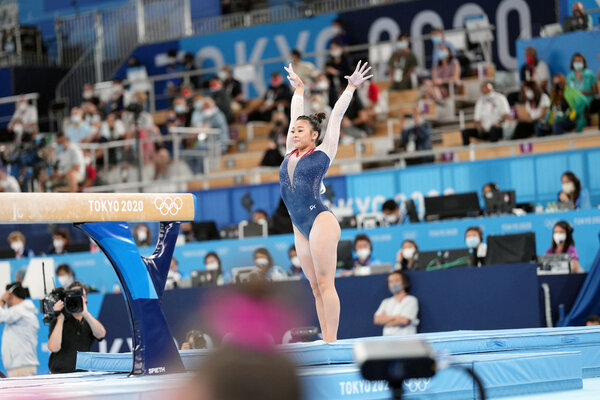 TOKYO — For years, Sunisa Lee, a teenager from Minnesota who became the Olympic all-around gymnastics champion on Thursday night, wasn’t training just for herself.

Lee, a Hmong American, went to the gym every day for all the first-generation Americans who wanted to achieve success when their parents had come to the United States with nothing. And she trained through grueling practices and painful injuries for her father, John, who suffered a spinal cord injury in 2019 and now uses a wheelchair.

Lee, 18, came into the Olympics wanting to win a gold medal for her father, who is her biggest fan, and for all the Hmong Americans who she feels are unseen in the United States. But she had publicly stated that her goal was to win silver in the all-around because her teammate Simone Biles, the four-time Olympic medalist, had been considered a lock to win that title.

But after a lifetime of chasing Biles in the all-around because Biles hasn’t lost that marquee event since 2013, Lee took advantage of her shot to do so in Tokyo. Biles, considered the best gymnast of all time, withdrew from the team event and the all-around because of mental stress, leaving Lee in position to win it all.

“It didn’t even think I’d ever get here,” Lee said. “It doesn’t even feel like I’m in real life.”

On Thursday, Lee hit routine after routine, often as if she were at practice, not at the most important competition of her life. She even nailed the floor exercise in her last rotation of the night, with new choreography and elements that had been changed by her coach, Jess Graba, that morning. They had decided to take out her fourth tumbling pass because her left ankle, which she fractured last year, hasn’t completely healed, leading to poor landings — and big deductions — for that final pass.

The change worked. Lee had her best floor exercise score of these Olympics.

Graba, Lee’s coach since she was in elementary school, knew that she could hit her new routine — and the other routines, too. From the start, he believed she was a special athlete, one that had “a lot of spunk” and was fearless. He and his wife, Lee’s other coach, Alison Lim, worked closely together to usher Lee to the top of the sport, but also keep the sport fun.