Considering some of the thrills the still nascent QClash between the Brisbane Lions and Gold Coast Suns has provided in its early years, this game lacked something: a decent crowd. In a week where the Suns future has been widely debated, few of its fans made the short trip north to watch their team play the graveyard twilight timeslot. 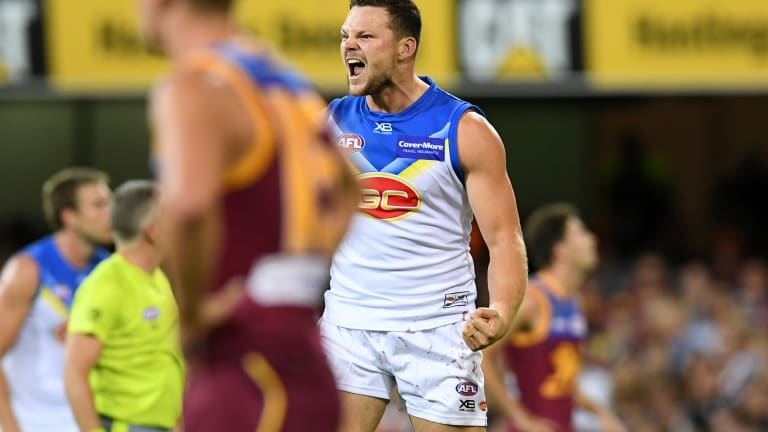 May day: Gold Coast co-captain scores a major to help soak up the pressure against Brisbane.

That was a shame, because not only did it underline questions about the softness of the Suns’ local support but they missed another tightly-fought contest that went to the wire. The Suns looked to have the game cold, dominating much of the game, only for the Lions, with the home crowd at their backs, to storm home late.

In the end the Suns held on by a kick, with Rayner’s last gasp shot, which would have drawn the game, sailing wide. And truly, they deserved it: they’re much more hard-nosed brand of football under Stuart Dew, whose first order of business has been to make his team harder to play against, and the players have responded.

The most fascinating battles were fought at either end of the field. Two of the league’s best key forwards and backs, the Suns’ Tom Lynch and Steven May, were up against two of their most promising understudies in Eric Hipwood and Harris Andrews. Here, the Suns had an obvious advantage in strength and experience.

But Andrews fought gamely against Lynch throughout, limiting him to two goals to underline his status as one of the game’s premier young defenders. And while May was one of the most influential Suns until suffering a finger injury, Hipwood’s influence increased, kicking three goals and nearly stealing the game.

They tackle well and often, and set up well in defence. The Lions had more of the ball early, but much of the difference was caused by them trying to chip their way out of trouble. The much-improved Darcy Macpherson, whose night was derailed by an ankle injury, was an early beneficiary with two goals from free kicks.

With Josh Walker omitted, Lions coach Chris Fagan threw Dan McStay, a natural defender, up forward to help Hipwood. That didn’t work either, so for the Lions to win, they needed to win the midfield battles and their smaller players had to hit the scoreboard.

Here the Suns had done their homework too. Touk Miller was given the job of running with Lions star Dayne Zorko, and Miller kept Zorko to just 10 touches while having an offensive impact himself to finish the most influential player afield and winning the Marcus Ashcroft medal.

Worse for the Lions, captain Dayne Beams clearly isn’t himself. He’s getting the ball, but currently looks a shadow of the player he was last year. It left much in the hands of younger players Jarrod Berry and Hugh McLuggage, both of whom were excellent, but meant the Lions were less effective in their forays forward. 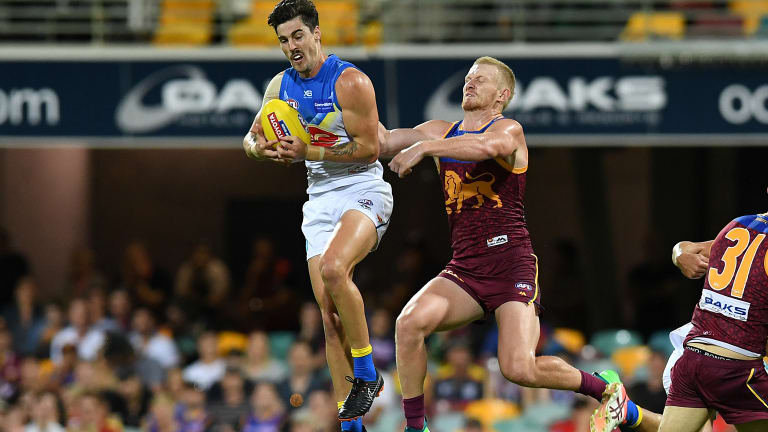 Leap ahead: Alex Sexton of the Suns gets out in front of Nick Robertson of the Lions.

For the Suns, Jarrod Harbrow was excellent running out of defence, gathering 25 possessions, and Brayden Fiorini was influential.

It leaves the Suns with three wins from five games and some extra belief; for the Lions, who started the season promisingly, their best opportunities for a win have gone begging.

“Obviously they were coming at us,” Suns coach Stuart Dew said after the match. “There were some pretty special efforts in the end, but also some things we can work on when the game’s in the balance … It went down to the last kick, and we’re lucky it wasn’t a draw, which might have been fitting.”

Asked about his side’s more defensive mindset, Dew said his players were driving the change. “You can have ideas, but unless the players are hungry for it you can talk to the wall a lot. We’re taking baby steps, but I think what we’re seeing is that they’re capable. Now our test as a whole club is to get that consistency.” 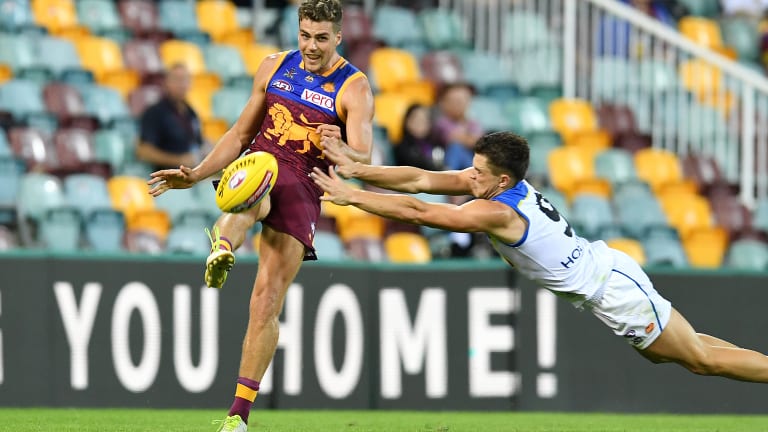 Full flight: Tom Cutler of the Lions kicks over an attempted spoil by Ben Ainsworth of the Suns .

Lions coach Chris Fagan was left to rue a series of close losses by his team, but was unbowed. “Maybe we needed to show a bit more composure; I thought we missed some set shots we should have kicked tonight. When you lose by five points you look at that.

“Our ball use out of our back end in the first quarter was not good, we got 13 turnovers in the back end and didn’t get one of them to score. I thought that was almost the game, in that first quarter. And then in the second quarter we got a lot of inside 50s, and I thought we didn’t hit our kicks all that well.

“We did a lot of things right too, on the night, but it probably explains why when the siren went we weren’t where we wanted to be.”