The Adelaide Thunderbirds horror Super Netball season has continued with a crushing 31-goal home loss to the Sunshine Coast Lightning – their biggest losing margin of the season.

The Lightning won each quarter to record a 75-44 victory and take home all four bonus points on offer on Sunday. 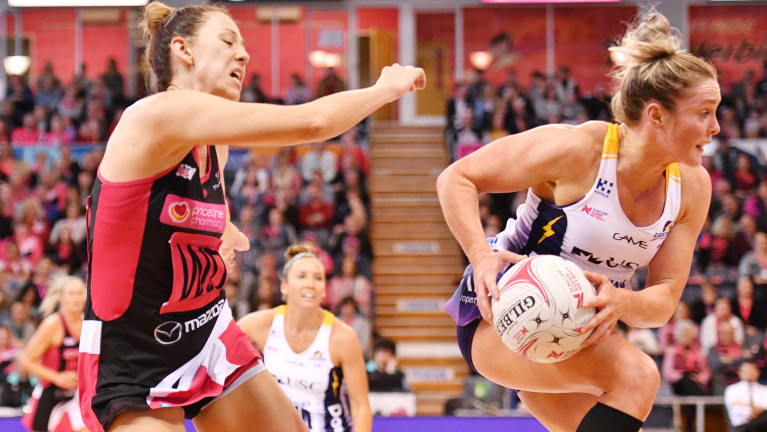 Fiona Fowler (left) of the Thunderbirds and Laura Scherian of the Lightning during the round 12 Super Netball match at Priceline Stadium in Adelaide on Sunday.

Adelaide was outplayed across the court and trailed 26 goals at three-quarter time, when the Lightning's star shooter Caitlin Bassett and defender Geva Mentor were subbed for Cara Koenen and Erena Mikaere.

But even a second-string Lightning side looked dominant over the Thunderbirds, winning the last quarter by five points.

Lightning coach Noeline Taurua said the move was a gamble, given the Lightning need every bonus point available in their bid to qualify for finals.

"It's always a toss up, knowing where we are at this end of the competition, but also for us as a team and our team morale it's huge," she said after the game.

"We always talk about team but sometimes being able to put it out there on court is another aspect so I'm really happy that we were able to do that."

Despite 41 goals in the match from Bassett and 14 from Koenen in the last quarter, Adelaide goalkeeper Kate Shimmin was best on court for the home side, snatching several turnovers despite a clear height disadvantage.

At the other end, Thunderbirds import shooter Cat Tuivaiti continued her comeback from a serious knee injury, taking to the court in the second quarter to replace Shimona Nelson.

Tuivaiti shot seven goals but became frustrated before Nelson came back on in the final quarter and finished the game with 24 goals from 30 attempts.

Coach Dan Ryan, who was last month sacked by the club and will finish at season's end, said it was a "disappointing day out" for the team.

"I think there's a lot of emotional fatigue in the group at the moment taking it's toll," he said.

"We did have a really good preparation this week but (it) certainly looked like a group today that was struggling a bit out there with energy levels.

"But we need to make sure that we keep fighting and keep pushing on, two games to go and we're still hungry and still believing that that win is possible."