Super W teams have reported surging interest in their squad trials as the five-team, five-round competition gears up for its second year. 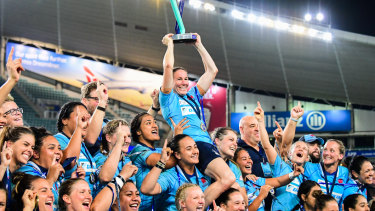 The numbers have come straight through to the Super W squads in the smaller states, with the Rebels women selecting 14 new players, or about half their squad, from the first-time trialists this year.

That's on the back of a 20 per cent rise in club XVs women players last year, many of whom must have watched veteran NSW captain and Wallaroo Ash Hewson kick NSW into the history books with a penalty goal in extra time of golden point at Allianz Stadium last year.

It bodes well for the overall quality of the competition and the Wallaroos stocks, and will be a well-timed boost ahead of an expected schedule of three Tests this year, including a Bledisloe Cup double-header in Perth in August.

In another development, Kayo Sports streaming service will show all games live when the season kicks off with a Brumbies vs NSW clash ahead of the Brumbies vs Chiefs match at GIO Stadium in Canberra on February 23. Fox Sports has committed to playing back all the double-headers.

There will also be an extra round in 2019, with a 2nd and 3rd place playoff match added on the weekend of March 30/31. The winner will play the minor premiers the following weekend, April 6/7.

"That growth is part of the reason that all the clubs are taking matches back to their grassroots, to continue to promote the game and inspire our next generation of Buildcorp Wallaroos.

"The competition gives our players top level game time, week-in, week-out which will hold them in the best possible stead for an action-packed international calendar in 2019."