Las Vegas: If Jeff Horn was a racehorse, Glenn Rushton reckons you would you be rushing to put the house on him.

Why? Because the undefeated World Boxing Organisation welterweight champion has never looked better. He has never felt better either. 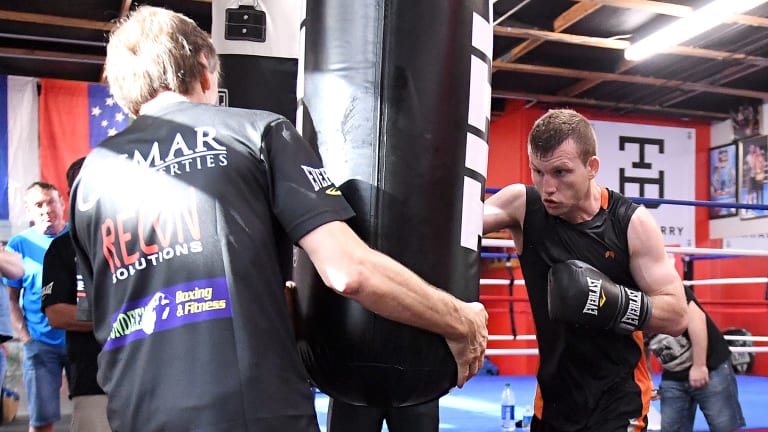 Jeff Horn looks better than ever leading into his title defence.

Horn (18-0-1) is the underdog as he prepares to defend his WBO strap against hotshot Terence Crawford (32-0) at the MGM Grand Garden Arena in Las Vegas on Sunday (AEST).

But Rushton thinks Horn will resemble something more like a pit bull when he steps inside the squared circle against the fancied American considered the best pound-for-pound fighter on the planet.

The iconic trainer has dubbed Horn "20 per cent better" than when he took down the legendary Manny Pacquiao to claim the welterweight crown, and now the Brisbane product is ready to prove it.

"The Pacquiao fight, people thought that was a fluke or I didn’t actually win it. Then they saw me fight [Gary] Corcoran and they think Corcoran wasn’t any good," Horn told Fairfax Media.

"Now they have no excuses if I fight one of the best pound-for-pound fighters in the world and beat him. They can’t say it’s a fluke every time, can they?

"If I’m able to pull this off and pull this upset, why can’t I be known as one of the best welterweights out there?"

The 30-year-old's weight cut is set to be a breeze and he is giving himself every chance of pulling off one of the greatest upsets in Australian boxing history – an achievement which would look almost bizarre alongside his status as defending champion.

"He is way ahead of Corcoran of course, we had a very interrupted campaign with Corcoran going into that fight," Rushton said.

"We had massive amounts of commitments, he sustained a bad cut in the middle of his forehead three weeks out so we missed around 40 rounds of sparring leading into that fight. That was an interrupted and difficult campaign but again we went ahead and got the job done.

"The fight before that of course was Manny Pacquiao, he is probably 20 per cent better than when he fought Manny Pacquiao. He’s a lot stronger mentally, physically he is better.

"You saw him today, he has muscled up, he looks really good, learn, hard and fit. Absolutely, this is the best he has looked.

"I think on the night he is going to be absolute pit dog in there. He’ll be raring to go."

Horn has been surrounded by family at his final training sessions in the sweltering Nevada heat as he edges closer to fight night.

The presence of those closest to him has taken the edge off training ahead of the biggest night of Horn's career, with chants of "Hornet" ringing around Kevin Barry's gym – the adopted home of New Zealand's former heavyweight champion Joseph Parker.

Even Rushton, the determined motivator, has been training with a smile on his face.

"It’s good to make Glenn happy because in some preparations he hasn’t been happy and he pushes me really hard and right at the end of the preparation I’m like ’Ah c’mon Glenn, give me a break, I need to taper down’," Horn said.

"He knows I’m in super shape for this one and we’re tapering just like we should be. I’m feeling good and I’m feeling confident, just like he is."