Susan Pettitt laughs a walk down memory lane at the AIS Arena "just makes me realise how old I am".

Memory lane takes the form of a corridor bearing an AIS Canberra Darters team photo from almost 15 years ago. Among a swathe of fresh-faced superstars-in-waiting is Pettitt, long before her days as an Australian Diamonds sharpshooter. 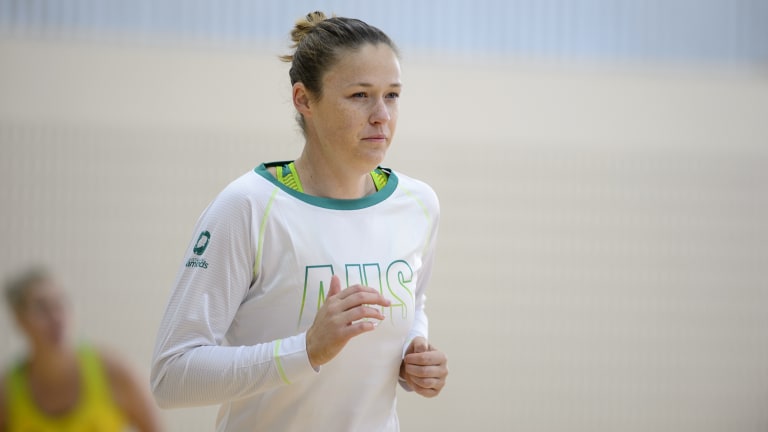 Sharp-shooter Susan Pettitt is coming home with a point to prove.

Now the Canberra-born star will return home as a Super Netball sensation with the GWS Giants looking to maintain their unbeaten record in the capital against the Adelaide Thunderbirds at the AIS Arena on Sunday.

Pettitt spent three years with the now defunct Darters in the early stages of her top-flight career and she has added three titles and World Cup gold to her sparkling resume.

"It was my home for three years and it was always nice to play at the AIS Arena so it should be good to get back here," Pettitt said.

"It’s always funny going back there and seeing the Darters poster on the wall in the corridor. It just makes me realise how old I am.

"It’s always nice to come back and play at the court I started my career at. Sometimes it’s a bit scary because you know who is watching you, but that’s alright."

The versatile Australian Diamonds shooter is considered one of the best playmakers in the game and she will give back to the Canberra community when the Giants visit local netball associations on Saturday.

At 34, the three-time Commonwealth Games silver medallist remains unsure of what the future holds.

Right now her focus is winning another championship after the Giants came up agonisingly short in Super Netball's foundation year.

"At the moment it’s just going one season at a time, one week at a time, and seeing how the body and the mind feel," Pettitt said.

"While I’m playing well and while I’m contributing to the team, I’ll keep playing."

She certainly hasn't lost her touch as she eyes a win that would leave the Giants well-poised to secure a finals berth with a host of teams nipping at their heels.

The Giants have a point to prove after a draw that left Pettitt frustrated because they had the game in their hands "but we just threw it away".

Whilst they are preparing for an Adelaide outfit winless through eight games, Pettitt maintains the Thunderbirds aren't to be taken lightly.

"I think they way they have improved every week, they are so close to beating people in those quarters," Pettitt said.

"It’s really unfortunate for them they’ve been one or two points on the wrong side of the scoreboard. We can’t take them lightly, they’re a team that is threatening and their win is very close.

"Back in the previous [pre-Super Netball] leagues you probably started to find a top four team and a bottom four team. This is so open, anyone can be in the top four and I think that is fantastic for the competition really.

"It’s actually crazy how close the whole competition is, every weekend there is I guess what you would call an upset. It makes the whole ladder switch around so much in one week. Every point is so important in this game."

The Super Netball clash will be the main event in a double-header with the Australian Netball League grand final, with the Canberra Giants hunting for a maiden title in the second tier competition.

Canberra is gearing up for a showdown against the Victorian Fury at the ACT Netball Centre on Saturday, with the winner to advance to Sunday's decider at the AIS Arena.