Departing Cricket Australia chief James Sutherland will leave behind an organisation undergoing significant change after becoming the latest key figure in the game to resign, but he insists his decision is not related to the ball tampering crisis.

CA is on the hunt for a new chief executive after Sutherland announced he would in the next 12 months step down from the post he has held since 2001. 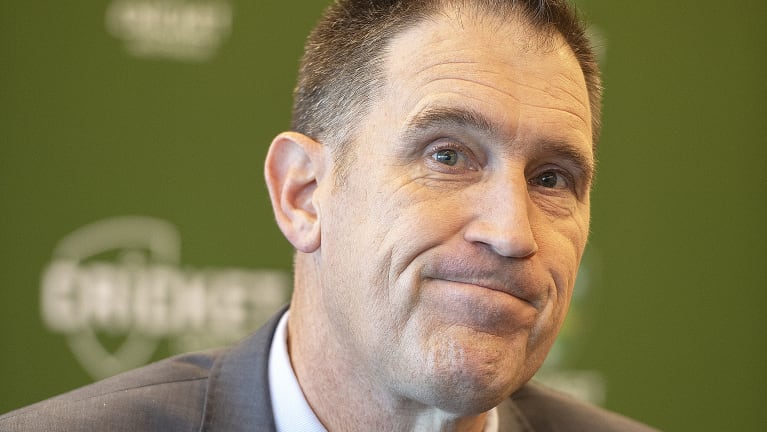 James Sutherland has stood down after 17 years as Cricket Australia’s chief executive.

Sutherland notified the board last week of his decision, which continues the upheaval at Jolimont since the damaging tour of South Africa.

Chairman David Peever, who has agreed to another term, and team performance boss Pat Howard are the two senior figures left in their posts after a dramatic few months which has seen Steve Smith and David Warner ousted as leaders and Darren Lehmann quit as coach.

Integrity chief Iain Roy was last week made redundant, as revealed by Fairfax Media, as part of a $20 million slashing of administrative costs.

Howard last year signed a contract extension until 2019 but his future could rest on the findings of the player-led review into the culture of the Australian men's team.

The game, as seen by the fans, will also change next summer with Fox Sports and Seven taking over from CA's long-term broadcast partner Channel Nine.

Pressure had been mounting on Sutherland since the events at Newlands but both he and Peever say his exit had been planned for two years.

Under Sutherland's watch, Australian cricket has experienced major financial growth and change, including the move to a city-based Big Bash League and the introduction of day/night Tests, but also come through several crises.

He survived Australia's Ashes capitulation in 2011 and the Argus review which ensued it, the Homework-gate scandal in India in 2013 which led to Mickey Arthur's sacking as coach and the fallout from Newlands.

He also copped criticism for CA's handling of last year's bitter pay war, though it's instructive that yesterday he was hailed as a "voice of reason" by the players' union. 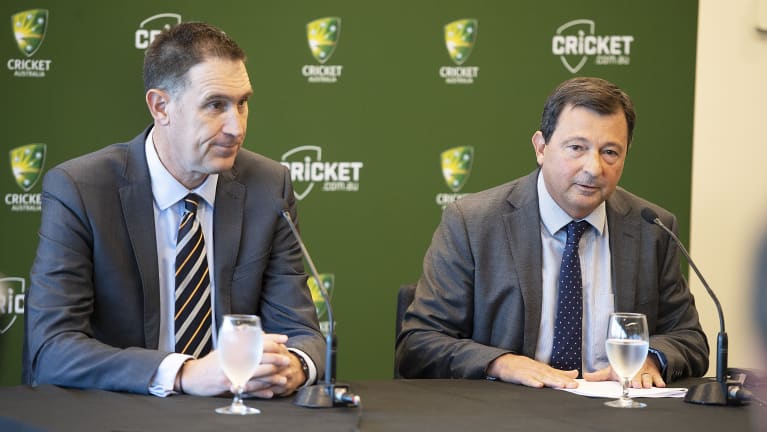 Sutherland (left) and Cricket Australia Chairman David Peever at the announcement on Wednesday.

Sutherland said the ball tampering scandal played no part in his resignation. He said at the time he wanted to stay on to help the transition.

"It certainly was a big issue at the time, but when you work in an issues rich environment like we do as chief executive of a major sport, these things come from time to time," Sutherland said. "It hasn't had a bearing on my decision, David and I have actually been talking about this for two years.

"It just feels like a good time for me to hand over the reins in an orderly fashion to my successor."

Peever brushed suggestions Sutherland had been pushed, saying he had considered resigning after the recent Ashes summer but stayed on through the TV rights talks which netted the game a $1.182 billion six-year deal.

Sutherland has long had strong support from the board, which has long believed he is the best sports administrator in the country.

"He's been talking with me about this for at least two years now, almost the whole time I've been chairman we've been talking about what the best time is and we decided that we really needed James to lead us through the media rights negotiation process, which he has done," Peever said.

"When James and I were getting clearer about timing we talked about the end of the successful men's and women's Ashes summer as a good juncture, but then we talked more about it and said we really need to complete the media rights process. There is no good time, there is always something going on in cricket.

"And so we decided then that after media rights were completed that James would announce at that point."