The Redfern revolving door is expected to see Anthony Seibold and Wayne Bennett trade places in the next 48 hours, but South Sydney fans can take comfort one person will definitely be at the club in 2019 – John Sutton.

Loyalty still exists in the game with Fairfax Media able to reveal the long-serving veteran and first Souths player to reach 300 games has signed on for a 16th and final season. 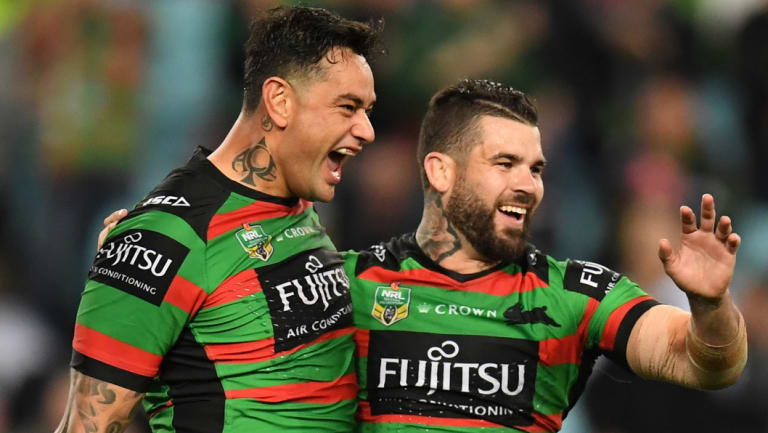 Mr South Sydney: John Sutton, left, has re-signed for one more year with the Rabbitohs.Credit:AAP

The club will officially confirm the news in the next 48 hours – about the same time Bennett is expected to be trotted out the red and green welcome mat.

Sutton resumes training next week and his swansong season is likely to be under Bennett, the coach he came up against on debut in 2004 when Souths played the Broncos.

The 34-year-old back-rower never wanted to leave Souths and was prepared to retire if another season could not be thrashed out with the Rabbitohs.

The lead-up to his 300th game during the season was a clear highlight for the NRL.

Should Bennett take over from Seibold, it will be the seventh coach Sutton has played under during his proud one-club career.

Star lock forward Cameron Murray, who only extended his own deal through to the end of 2021 last week, said it was vital a player like Sutton who had done so much for the club and become a part of its history remained part of the playing squad – not a supporter.

Murray also told Fairfax Media Seibold had contacted him personally during the holidays to inform him of his Broncos move, and made a point of addressing the playing group when he returned for pre-season training.

"He proved this year he's in close to career-best form, 'Seibs' brought out the best in him, and he's a leader by his actions and words," Murray said.

"He has a few records at the club, he bleeds red and green and he's a role model for the kids coming through our club. It's important to see him go around one more year, and I'm sure what the club has seen from John during his career and the past months they're keen to keep him on board.

"I'm looking forward to seeing him training because he'll be better playing next to me than he will be on the sidelines supporting.''

As for the coaching circus, Murray said: "Seibs rang me when he got back from his trip overseas in the off-season, about two or three weeks before I came back, and he said it's a shame all the news came out first in the media, but he told me he was going to sign with the Broncos for 2020 because that was in his control, and Souths had already signed Wayne Bennett.

"He then sat down at the start of the pre-season and said 'as far as I know I'm coaching you next year', and 'I won't let what's happening in the future distract me from my role as head coach'. He said he was focused on developing players, developing our training programs and game model.

"If he does stay I'm confident he'll do as good a job as he did last year.

"With Wayne, he's proven to be one of best coaches of his time and has a lot of premierships under his belt. He's been part of that England program a few years now, and I know Sam [Burgess] is a big fan and he's really looking forward to him coming.

"I think he'll be a really positive driver of where this club wants to go in the future.''

Murray added it was nice the club extended his deal, which would have been ultimately ticked off by the in-coming super-coach.

The 20-year-old would love to start in the No. 13, which could become a possibility if Burgess moves into the right backrow spot vacated by Angus Crichton. Souths fans will also be hoping Tevita Pangai Junior, another brilliant back-rower, follows Bennett to Redfern, but not until 2020.