Sydney usurped West Coast on Friday night as the team to beat in 2018, romping to a sixth-straight win over the ladder leaders and restricting the Eagles to just seven goals in a 15-point triumph.

In a night where key forwards struggled to make an impact on the tighter confines of the SCG, the Swans' impressive young brigade combined with their older stars to halt the Eagles' 10-match winning run and deliver a powerful message to the rest of the competition. 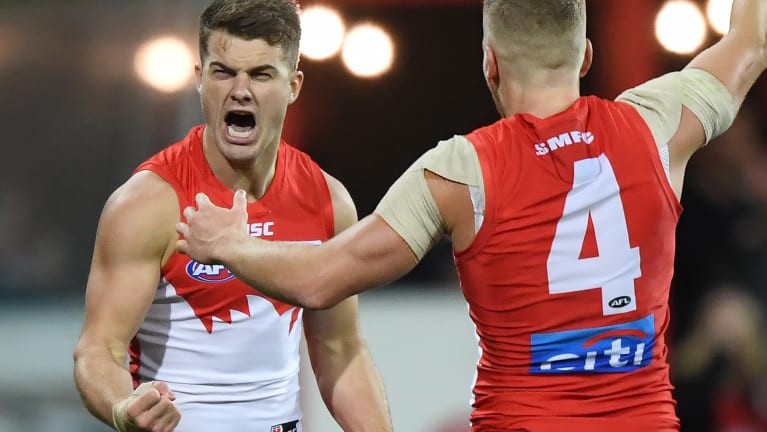 Flying high: Tom Papley kicked two in a tight affair at the SCG.

John Longmire's in-form charges have laid the strongest claim to the AFL premiership at the halfway point of the competition, despite still not having found their best football.

Of the other major contenders, Richmond are struggling to win away from the MCG, and Geelong are yet to take a significant scalp.

The Swans play both of those clubs following next weekend's bye with an excellent opportunity to increase their grip on a top-two finish.

Before 36,402 delighted fans, Lance Franklin just about edged his battle with Eagles defender Jeremy McGovern, although it wasn't his most accurate night and he'll be slightly disappointed with his return of two goals.

Tom Papley and Ben Ronke nailed a pair of goals each, while captain Josh Kennedy was superb in the middle and George Hewett delivered another suffocating tagging effort on Eagles ball magnet Luke Shuey.

Veteran Heath Grundy was as reliable as ever in his 250th AFL game, while Aliir Aliir took countless intercept marks to curtail West Coast's attacking raids in just his second AFL game of the season.

They both provided plenty of support to Dane Rampe, who fought superbly on spearhead Josh Kennedy, restricting the target man to two goals. 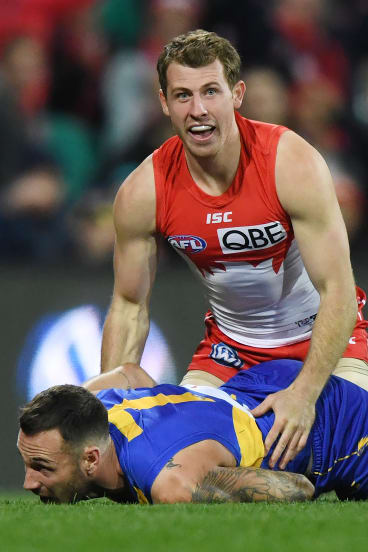 Jack Darling was missing with an ankle injury, and West Coast simply sent too much ball Kennedy's way.  He tried hard, but it became too predictable and he was forced off briefly during the fourth quarter to receive some treatment on what appeared to be an ankle injury.

Kennedy returned and had a set shot with two minutes to go from 20m out right in front which would have put the Eagles within 10 points, but he missed.

After being held goalless in the opening term, the Swans made their move in the second and third quarters, kicking five goals in each period.

Eagles midfielder Elliott Yeo came to life in the second half and kicked long-range goals either side of the three-quarter time break as West Coast fought gamely to the end but it wasn't quite enough against a very well-rounded Swans.

They remain winless at the venue since 1999.

From the outset this was a throwback to the defensive struggles these two clubs enjoyed during the mid-noughties, and it took a staggering 18 minutes and nine seconds for the only goal of the opening quarter to be kicked.

Kennedy of the Eagles was responsible, taking a pack mark 20m out from goal before going back and drilling it through. 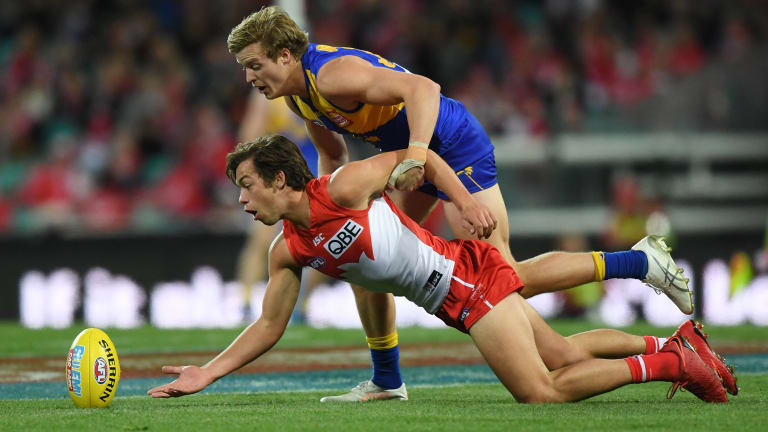 Swans young gun Will Hayward had a shot from a similar distance, but uncharacteristically missed to the right.

Much of the  opening term was played between the 50m arcs, although the Eagles were getting more inside-50s.

The game had to eventually open up and it did after the first break when rookie Ronke nailed a set shot from 40m out.

Liam Ryan hit back instantly after a Sydney defensive mix up before Papley kicked the first of two he procured for the quarter.

Sydney went into the main break having booted five goals to one in the second term and they maintained the lead through to the finish.