The NSW Swifts scored two late goals to scrape past Adelaide 51-49 on Sunday and leave the Thunderbirds still without a Super Netball win this season.

In an unexpectedly tense finish, the Thunderbirds levelled the scores with two minutes to go at Quay Centre in Sydney.

But timely intercepts from Swifts pair Paige Hadley and Abbey McCulloch ended their late run as the home side recorded their fourth victory from six games. 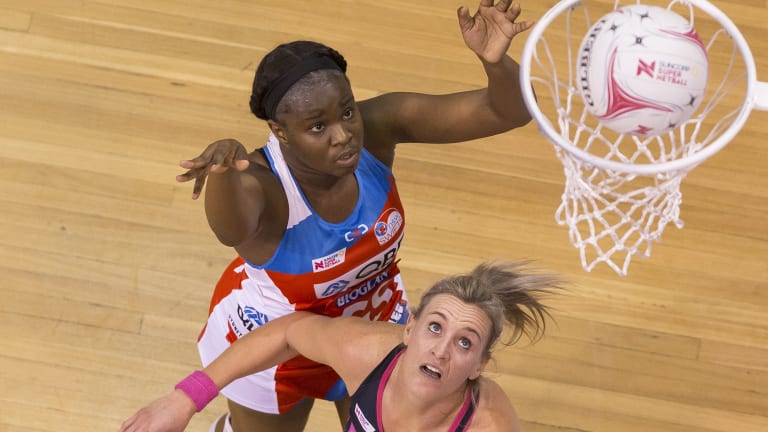 Sam Wallace shoots and scores for the Swifts on Sunday.

The upside for Adelaide was they banked their first competition points of the season with two bonus points for winning the third and fourth quarters. 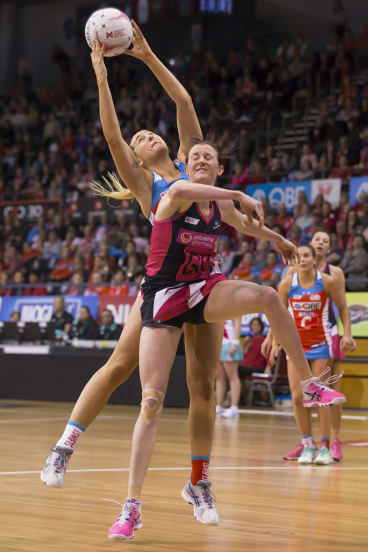 Sophie Garbin wins this battle with the Thunderbirds’ Kate Shimmin.

Swifts coach Briony Akle made an uncharacteristic number of changes as she attempted to avoid an upset loss – including swapping out star goal shooter Sam Wallace (30 goals from 34 attempts) at the final break.

Adelaide's defence provided some hustle but the Swifts were helped by the contributions of shooters Helen Housby (15/20) and Sophie Garbin (6/9).

Adelaide goal shooter Shimona Nelson finished with healthier figures (33/39) after dropping below 80 per cent at one stage, her rebounding efforts making up for her at-times wayward shooting.

NSW led 31-25 at halftime and despite the Thunderbirds cutting the deficit to three goals heading into the final quarter, the Swifts continued to make a raft of substitutions.

Akle was relieved after admitting her side felt the pressure as the Thunderbirds threatened the upset.

"Everyone knew that the T-Birds hadn't won a point – everyone's talking about it and I think that's where the youth comes in," Akle said.

"If we had a few older heads, we'd just play our game and we'd be okay but I think the pressure got to them."

The introduction of the bonus-point system has brought a new level of intensity to Super Netball and Sunday's result highlighted the way it can extend the meaning of games.

By not banking all bonus points, the fourth-placed Swifts (26 points) missed the chance to draw level on the table with the Giants and Sunshine Coast Lightning (both 28 points). The West Coast Fever (35) sit clear at the top.