Johannesburg: Australia off-spinner Ashton Agar took a career-best 5-24, including a hat-trick, as they thrashed hosts South Africa by a massive 107 runs in the first Twenty20 International at The Wanderers on Friday.

After being sent in to bat, Australia amassed 196 for six in their 20 overs as South Africa struggled with their line and length and missed a number of catches in the field in what was a sloppy display. 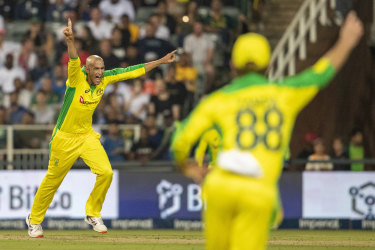 The home side were in early trouble in their reply when they lost mainstay Quinton de Kock in the first over, and it became a precession after that as Agar helped bowl the hosts out for 89, a record low for South Africa.

The second fixture in the three-game series will be played in Port Elizabeth on Sunday, before the finale in Cape Town on Wednesday.

"We set the tone in the field, took a couple of sharp chances and Ashton bowled really well. It was an all-round good performance," Australia captain Aaron Finch said at the post-match presentation.

"The way we attacked the crease and bowled a good aggressive length was really impressive."

It was a record loss for South Africa in the shortest format and comes eight months before the World Cup being be staged in Australia starting in October.

Steve Smith top scored for the tourists with 45 from 32 balls on his return to South Africa for the first time since the ‘sandpapergate’ scandal of March 2018, after which he was banned for a year by Cricket Australia along with David Warner.

Opener Warner’s return was not as triumphant as he was out second ball for four, but Smith and Finch (42 from 27 balls) put on 80 for the second wicket in only eight overs to lay the platform for the impressive score.

South Africa were in early trouble when an excellent swinging delivery from Mitchell Starc uprooted the middle stump of De Kock, before Agar ripped through the home batting.

He had top-scorer Faf du Plessis (24 from 22) caught on the boundary, before trapping Andile Phehlukwayo leg before wicket with the next delivery. 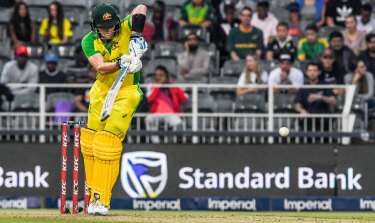 The hat-trick was complete when Dale Steyn edged his first ball to Aaron Finch at slip.

It is the 12th hat-trick in Twenty20 internationals and the second by an Australian after Brett Lee against Bangladesh in 2007.

"I'm not too sure what happened there. The energy was there but the skills weren't good enough tonight," De Kock said.