The Canberra Raiders have locked Joe Tapine into a long-term contract extension, re-signing the star back-rower before other clubs had a chance to swoop next month.

Tapine has agreed to stay in the capital until at least the end of 2023 in a massive off-season boost just weeks before the squad starts training again. 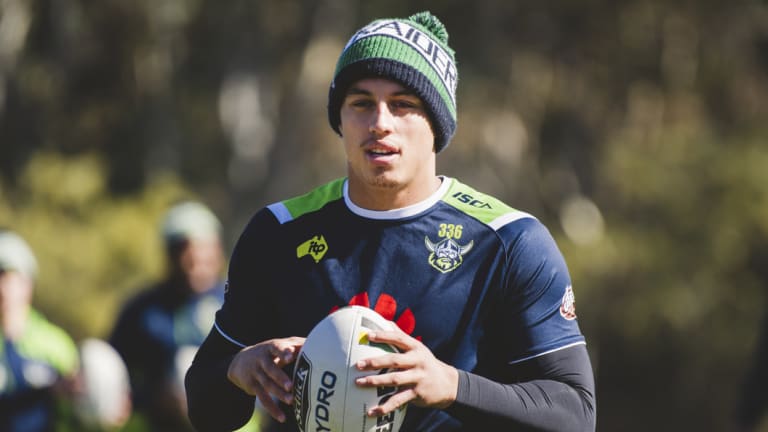 Tapine's still had one year left on his contract at the Raiders, but the Green Machine saw him as a priority signing for the future and have moved to upgrade him for the next four seasons.

His decision to stay is also a vote of confidence in Canberra's plans to break back into the finals after failing to secure a top-eight spot in the past two seasons.

"Moving to the Raiders has been the best decision for my footy and I know by extending my time here in
Canberra I can continue to become a better player," Tapine said.

"I’m confident in the group of players and coaches we have that we can keep improving and be a better and more consistent team. My partner and I have also made a home in Canberra and we love living here."

The Raiders have all but finalised their roster for next year and they have only a handful of players who are off-contract at the end of the 2019 campaign.

Tapine's New Zealand teammate Jordan Rapana will be another key re-signing target for Canberra, while the club will welcome two more English recruits to their roster for next year.

The Raiders have maintained roster stability despite some high-profile departures at the end of last year.

Blake Austin has moved to the UK Super League, Shannon Boyd is now a Gold Coast Titans prop and Junior Paulo has returned to the Parramatta Eels.

There is, however, a core group of players including Aidan Sezer, Josh Papalii, Josh Hodgson and Elliott Whitehead to lead the club back to the top and Tapine is now the only Raiders contracted until 2023.

Tapine is in Europe with the New Zealand squad and could make his comeback from a broken thumb when the Kiwis play against England in Hull on Sunday morning Australian time.

"Although Joe was already on contract until the end of the 2019 season we identified him as a priority re-signing and we’re delighted to be able to extend his contract with the club," said Raiders recruitment boss Peter Mulholland.

"Joe has the ability and skillset to be one of the games best young forwards and we see him as a huge part of
our future. We’re excited to watch him progress as a player and leader within our side over the next few seasons."

The bulk of the Raiders squad will start pre-season training on November 1, with international players to return after the Christmas break.

The NRL is also expected to publish the draw for 2019 this week, with the Raiders to start their season away against the Gold Coast Titans and shifting a home game to Wagga in May.