North Carolina didn’t shy from anyone this season, but it didn’t really have to. The Tar Heels beat Duke twice and Gonzaga once, and lost only one game — a November defeat against Texas — to a team that did not make the N.C.A.A. field. They open with Iona (17-15) and then could face Washington, the best team from a weak Pacific-12. Only its last step before the Final Four appears tougher than usual: No. 2 Kentucky. But North Carolina may have some momentum by then. 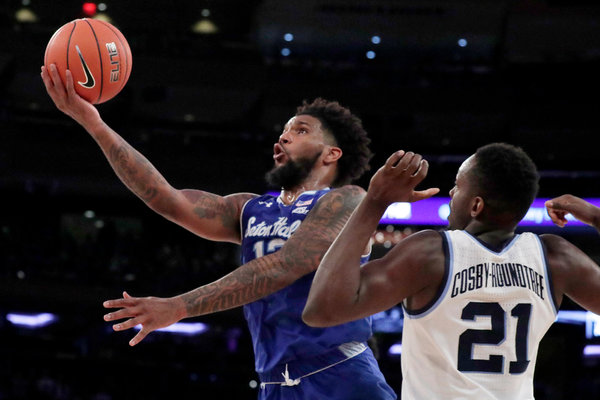 With Seton Hall trailing Villanova by 2 points in the closing seconds of the Big East tournament final on Saturday night, Pirates Coach Kevin Willard had the ball right where he wanted it: in the hands of the junior guard Myles Powell.

Powell freed himself for a shot — a potential go-ahead 3-pointer that would have given Seton Hall the lead, and perhaps even the title — but sent it a fraction long. The ball hit the back of the rim, the Wildcats ran out the clock, and Willard and Powell didn’t regret a thing.

“I thought it was going to drop,” Powell said.

The 6-foot-2 Powell scored 78 points in three games in three days at the Big East tournament, carrying the Pirates to the title game.

His week began with a 31-point effort in a dominant win over Georgetown in which, at one point, he single-handedly outscored the Hoyas, 29-25. He followed that with a 22-point outing in a semifinal upset of Marquette, and then added 25 points, 5 rebounds, 4 assists and 3 steals in the loss to Villanova in the final.

Powering the Pirates, though, is nothing new for Powell, a Trenton native who is averaging 22.9 points, 4.1 rebounds and 2.9 assists in what was expected to be a down year at Seton Hall. The Pirates lost four senior starters after last season and were picked to finish eighth in the league’s preseason poll; instead, Seton Hall wound up third, knocked off Marquette and Villanova late in the year and earned its fourth straight trip to the N.C.A.A. tournament.

Willard credits Powell with continuing the leadership tradition established by the seniors who left after last season: Khadeen Carrington, Angel Delgado, Desi Rodriguez and Ismael Sanogo. But his shooting hasn’t hurt, either: Powell has made 103 3-pointers while shooting 36.3 percent from behind the arc. His supreme confidence in himself, and his team, is just a bonus.

“Myles Powell is the best shooter in the country, period,” Jimmy Salmon, the director of his New Jersey A.A.U. team, said when Powell committed to Seton Hall in 2015. “His game will transcend to the next level.”

Now Powell is headed to his third straight N.C.A.A. tournament. If his performances at Madison Square Garden are any indication, Seton Hall’s opponents are in for a handful.

Auburn won 26 games and the Southeastern Conference tournament this season, but Bruce Pearl will face a lot of uncomfortable questions if the Tigers keep advancing in the tournament. Pearl, whose history includes trouble with the N.C.A.A., had an assistant (Chuck Person) indicted in 2017 for his role in the Adidas recruiting scandal, and he suspended a second coach (Ira Bowman) last week after he was implicated in a scheme to sell admission to the University of Pennsylvania when he worked there.

For the Aggies, It’s Everyone’s Turn

New Mexico State Coach Chris Jans has what might best be described as a participation-trophy rotation: Everybody plays a little bit. The Aggies have 13 players who average at least 10 minutes a game, but it’s working: Jans’s team won 30 games. “Everybody is a player on our team, so I always have to have a chip on my shoulder, like it’s my last game playing or something,” guard Terrell Brown said. ANDREW DAS