The blow-up was so explosive, rival fans in Canberra standing nearby heard every word and did not know which way to look.

Melbourne had just finished a trial game against the Raiders in country Griffith back in 2015 when Craig Bellamy went nuclear on a young Cameron Munster. 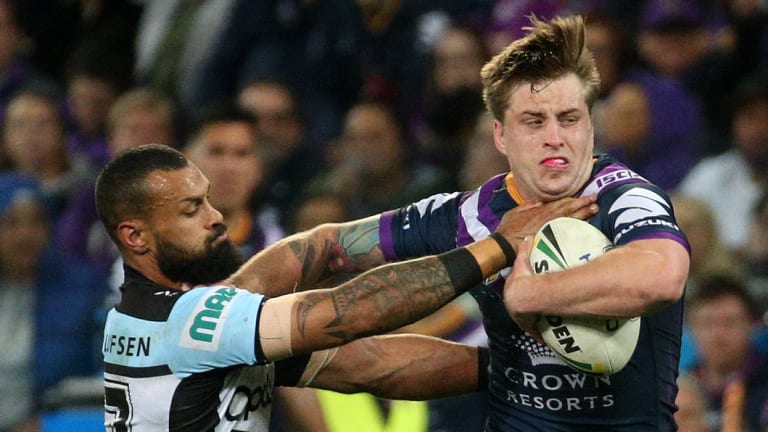 Straight and narrow: Cameron Munster has cleaned up his act in 2018.

Word had got back to Bellamy that Munster had been up to the wee hours the previous night on his phone, and played like someone who had had no sleep.

Storm insiders say the only Bellamy blast that came close to this night was 2009 when the coach peeled paint of the walls with a verbal attack inside his office on James Maloney.

Munster could not stop smiling when recalling the monumental pre-season eruption, and said despite the personality differences with Bellamy, the pair actually got along well.

Eve Bellamy told the Herald: "He has rattled me now and then. We get along extremely well, which is surprising because our personalities are chalk and cheese – he's out there and I'm a boring old prick."

Munster said of Bellamy: "He's got a bit mellow these days because he's got a couple of grandchildren.

"The best one was in Griffith. He screamed at me in front of everyone. We were playing a trial against the Raiders. All the fans in the crowd heard and were watching and listening. That's something I won't forget.

"He's always frothing. When he gets angry he starts spitting. That's Bellyache.

"He's an angry man when it comes to footy, he's very passionate, and I'm really passionate about my rugby league and always watch footy.

"I never watch myself play on TV after games. I always watch other games played.

"But we always talk about footy. At the same time I give him a lot of stick about what he wears, what he puts in his hair and what he says.

"Sometimes he says the wrong thing and I'll give it to him.

"I guess we admire each other for our hard work."

Bellamy's words of wisdom after Munster was momentarily sent home for a dust-up with Ben Hunt during the World Cup were not lost on the 24-year-old, and he has taken the game a little more seriously this season.

Munster said his drinking often led to "mischief", and while he also stated he has never had a drinking problem, feared if he did not clean up his act, "I'd end up one of those players who went out the back door and worried about playing country footy."

Munster has not had a drink for seven weeks.

"I felt everything happened quickly last year, there was my Origin debut, my Australia debut, the grand final, it all happened in a big year and I got too far ahead of myself," Munster said.

"I got a bit carried away. A lot of players and young men do that. That's football and life. Everyone makes mistakes. It's something I've learned.

"I've been worrying about footy and things I enjoy when I'm not playing footy or training. That's golf or helping kids out at clinics at schools. That takes my mind off other things so I don't get up to mischief.

"I didn't have a problem with alcohol. I used it as an outlet. I haven't had a beer for seven weeks. When I had that incident [with Hunt] I was probably about 14 weeks off it.

"I decided it was time to stay off it for a bit and keep my nose out of mischief."

Munster has a Storm premiership tattoo under his left bicep, and would love to add some more ink after Sunday night.