ATLANTA — There is a history of broken promises here, in English Avenue and Vine City, two neighborhoods near Mercedes-Benz Stadium, which will host the Super Bowl on Sunday. Built with more than $700 million in public funds for construction and future maintenance, the approximately $1.5 billion stadium opened in grand fashion in 2017 near these historically black neighborhoods, two of the poorest in the Southeast.

Before this stadium, there was the Georgia Dome, which was developed in the early 1990s. An entire neighborhood, Lightning, was razed to make way for that stadium, which was then demolished to make way for Mercedes-Benz Stadium. In the Georgia Dome’s life span — it was home to the N.F.L.’s Atlanta Falcons from 1992 to 2016 — residents of English Avenue and Vine City kept waiting to see the revitalization city officials had said would come.

In May 2014, construction began on Mercedes-Benz Stadium, which promised to be one of the nation’s most awe-inspiring sports facilities. As it rose, two black churches were displaced and tens of millions of dollars were directed toward efforts and organizations to help the local residents. 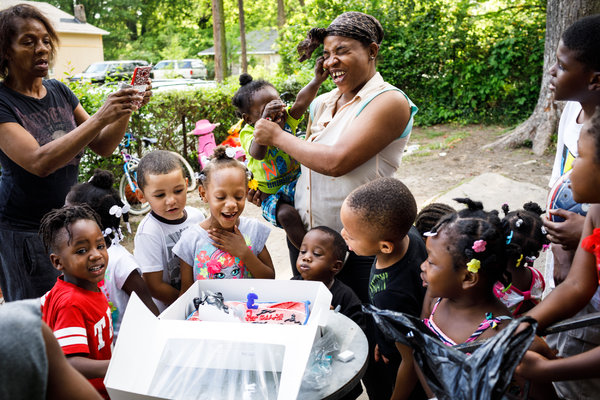 A lifelong Atlantan, I began photographing the full spectrum of residents’ lives in English Avenue and Vine City shortly after the stadium broke ground: from the joys of ribbon cuttings for new parks and children blowing out candles on birthday cakes to the sorrows of funerals, house fires and people grappling with heroin addiction.

Along the way, I met Chiliquila Ogletree, a United States Army veteran and matriarch of a family that has lived in English Avenue for five generations. One of her earliest memories of living here was watching the Rev. Dr. Martin Luther King Jr.’s public funeral service.

In recent years, she has taken guardianship of six grandchildren — a struggle all its own. But with them all in a house without running water, Ogletree has also become a master of efficiency and economy to ensure everyone is bathed, clothed and out the door by 7:10 a.m.

Arthur Blank, the Atlanta Falcons owner and a Home Depot co-founder, has invested millions of dollars in the neighborhood through the Arthur M. Blank Family Foundation. There is a new job training center and the @Promise Youth Center, and some homeowners have had their homes repaired through programs like Habitat for Humanity.

With only a small fraction of the population owning their homes, and most residents older adults, an affordable housing complex for seniors that is under construction may offer a higher quality of life to those homeowners who do not have the money to maintain their own property.

But it also means those homes may soon be vacant, making the land they occupy ready for development. New development typically raises property taxes and rents, and often forces out community residents, threatening their fragile economic existence.

On Sunday, as more than 70,000 football fans pack into Atlanta’s Westside, exhaust will billow from the cars and pickup trucks filling the many lots that separate the stadium and neighborhood residents.

Ogletree’s mother, Elaine Minter, 71, will be watching the game from her room at her daughter’s home. “Yeah, I look at the Super Bowl every year,” Minter said. She added, “Ain’t no way I’m going down to no damn stadium.”

After the game, a winning team will emerge, its colors will be paraded in the streets, and then it will be Monday — just another day for the people for whom English Avenue and Vine City are simply called “home.”