Australia's Sydney 7s title defence has been given a massive boost with the news try-scoring machine Ben O'Donnell is fit to play in the World Series leg at Spotless Stadium this weekend.

O'Donnell will be named in the Aussie men's line up when coach Tim Walsh unveils his squad of 13 at Olympic Park on Thursday. 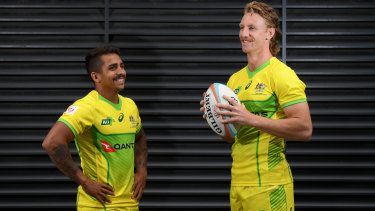 The 23-year-old, who has scored an average of almost three tries per match this season, has been able to overcome a niggling knee injury that ruled him out of the quarter finals in Hamilton last week.

It is O'Donnell's second season on the World Series circuit but he has already established himself as one of the biggest stars, earning a World Rugby Player of the Year nomination last year.

Australia rely on him and Maurice Longbottom for much of their attacking impetus and his absence was keenly felt from the team's quarter final against New Zealand on day two.

Both players will have extra motivation to be at their most potent with the Australian Rugby Foundation pledging to donate $500 to community rugby coaching programs every time an Australian player – male or female – scores a try this weekend. 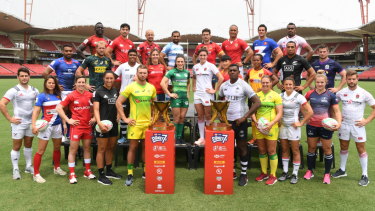 Sydney 7s has a new home at Spotless Stadium this year. Credit:Peter Braig

The same initiative raised $95,000 across all Aussie 7s, Wallabies and Wallaroos tournaments last year and is targeting a figure of more than $100,000 this year.

Veteran forward Jesse Parahi is also expected to be named in the squad, and will provide some welcome experience and leadership alongside captain Lewis Holland.

Both the men's and women's teams will be defending their titles at the same tournament last year, although you will not find many players willing to talk about it.

The men's team have a new coach in Tim Walsh and a raft of new players, while the women's team are doing their best to find a new identity as the gold medal afterglow fades and traditional rivals New Zealand open up a performance gap.

Coach John Manenti has worked hard to bring through the next generation of stars, such as Page McGregor, Demi Hayes, Lily Dick, Yasmin Meakes and Sariah Paki, at the same time as improve the team's contact work.

The proof will be in the pudding this weekend, in front of a sell-out crowd for the women's-only session on Friday and a predicted 15,000-strong crowd on the mixed sessions on Saturday and Sunday.

The Aussie women meet Spain and China first up on Friday before a clash with the USA women, who are currently third in the standings ahead of Australia in fourth spot.

The Aussie men play Argentina and Tonga on Saturday before a final pool clash with 2017-18 World Series champions South Africa.

"Playing on home soil is absolutely amazing, we don't get to do it very often," women's co-captain Sharni Williams said. "We travel the world and we play at really odd hours of the day, people have to set their alarms to get up and watch us, so why not get out here and watch it live and start 2019 on a high note by winning it."