Organizers of the Boston Marathon had no idea what to expect when they opened registration for the 2021 race.

The organizers, who canceled the 2020 marathon because of the coronavirus pandemic, moved this year’s race to October from April, and now the fall calendar is full of big marathons. After more than a year of coronavirus fears, organizers didn’t know if lingering concerns about infection might sour runners on the idea of running in a mass of humanity, which is fairly inevitable regardless of social distancing protocols. In this case, they include capping the race at 20,000 runners rather than the usual 30,000.

Last week, as the Boston Athletic Association, which owns the race, began letting runners know if they had made the cut, the answers became clear. Runners were ready. The race was oversubscribed by more than 9,200 qualifiers, an indication of the enduring allure of the country’s oldest marathon and of runners’ eagerness to toe a starting line.

“Everyone has been alone for more than a year, and we are tired of being alone,” said Tom Grilk, chief executive of the athletic association.

Dawna Stone, the chief executive of Running U.S.A., an association that represents road races, said everything she was seeing suggested a robust return. It surely helps that the prevailing wisdom is that the risk of disease transmission outdoors is minimal with the proper protocols. “Running events should be able to resume safely,” she said.

Of course, Boston being Boston — as in, the only major marathon that requires a qualifying time from the previous year of marathons — there is one significant downside to the hunger for racing.

With the field reduced by roughly one-third, runners had to beat the qualifying standard for their age group by 7 minutes 47 seconds to get into the race, since Boston accepts runners from fastest to slowest.

How ridiculous is that number? The previous record for the cutoff time came in 2019, when runners had to beat the qualifying standard by 4 minutes 52 seconds. That was deemed so high that the Boston Athletic Association lowered the standard for age groups by five minutes so runners could have a better idea of how fast they needed to run to get that bucket-list qualifying time, known as a “B.Q.”

(Not-so-humble brag — I fought through a nasty wind on Michigan Avenue in the final miles of the 2019 Chicago Marathon to beat this year’s standard by 62 seconds. Little did I know, those last steps would mean something. Talya Minsberg, the captain of this newsletter, beat the standard in that same race by five seconds. Our high school cross-country coaches are surely proud of us for “running through the tape.”)

Grilk said he had not anticipated this record-setting cutoff time. But then again, he did not see anything coming because there was no precedent for how runners would react to the opportunity to race again as the coronavirus threat eased in the United States. Logic might have suggested a resistance to travel or an inclination to run a race close to home.

“Maybe too many people thought it would be easy to get into this year, which made them apply when they normally wouldn’t have,” he said. “I really have no idea.”

Whatever it is, on Oct. 11, roughly 20,000 entrants — including some 5,400 participants raising money for charities and elite runners — will attempt to run from the western suburbs to Boston, just as runners have nearly every year since 1897.

Things will be a little different this year, and not simply because of the smaller field. To avoid the massing of thousands of runners at Hopkinton High School before the race and then at the starting line, organizers are doing away with specified start times except for the elite.

There will be no fighting for elbow room in a corral or waiting around for a starter’s pistol. Think of it as roughly 19,500 starting waves instead of the usual four. The chip in your bib and your watch will keep your time.

It will be weird, yes, but having spent a Patriots’ Day morning shivering in the rain at Hopkinton High School as my feet sank into the mud with every step, this system sounds kind of civilized.

See you on Heartbreak Hill — I hope! 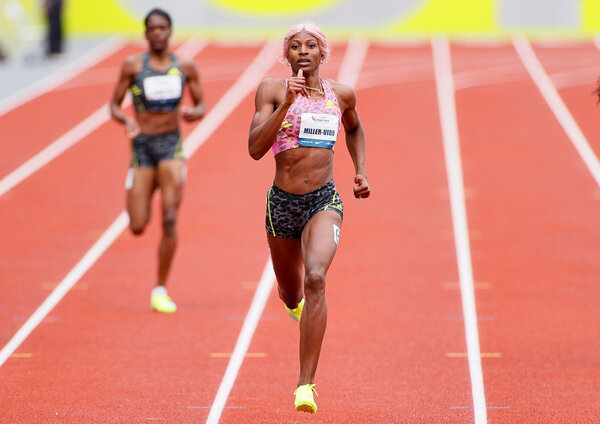 Just a reminder for next time you call a runner the real G.O.A.T. 🐐

In late April, the NN Running Team — home of distance-running greats like Kipchoge and Kenenisa Bekele — released a 20-minute documentary on the town of Kapchorwa. The video, available here, looks at the rise of Ugandan distance running, focused specifically on Kapchorwa in the eastern region of the country.

Try one of these 47 smoothies. Our friends at NYT Cooking are full of good ideas as the temperatures rise. Try this simple strawberry smoothie, a heartier banana almond flax smoothie or this green smoothie (featuring a two-minute prep time.)

Your back, chest, shoulders and wrist flexors may be feeling the effects of more than 14 months of a new work routine. Here are some simple stretches that can relieve pain and get the blood flowing to your muscles.