Salta: A calmer Michael Cheika says he had no option but to unleash a Krakatoa-esque half-time spray to get his Wallabies team switched on before they orchestrated the biggest comeback in Test history among tier one nations to pull of a 45-34 victory over Argentina.

With Australia trailing 31-7 after one of their worst halves of football in memory, Cheika knew his moment had come. With speculation about his future swirling, it was time to tell his players exactly what he thought.

Television cameras picked up Cheika delivering one of the all-time verbal assaults on the team in the change rooms. At one point he pointed his finger in the direction of Bernard Foley as players watched on, knowing fair well they had been average at best.

The message had the desired result, with the Wallabies piling on five second-half tries in the space of 22 minutes to seal a 45-34 victory that was a quintessential case of a game of two halves.

Previously, the biggest comeback by a tier one nation was when Fiji defeated Tonga 41-38 in 2010 after trailing 31-10 at half-time.

“I just wanted to say what I felt,” Cheika said. “I didn't go down there with a plan of doing that or anything like that. I suppose it's not really for public airing [what I said exactly]. Everything has to have personal meaning and we needed to get some personal meaning for our game because in the first half it wasn't there. Once the lads got some meaning and some purpose, they played a heap better.

“I was obviously very unhappy with the first half and very happy with the second half but happy doesn't really make a difference at the end of the day.

"A few things didn't go for us but we didn't make anything of ourselves with our approach to the game, especially defensively. You've got to get up and put your body there and make it happen. I'm not going to pretend I know why because I don't think they even know why. What's obvious is you cannot let that happen, you cannot be in that situation.” 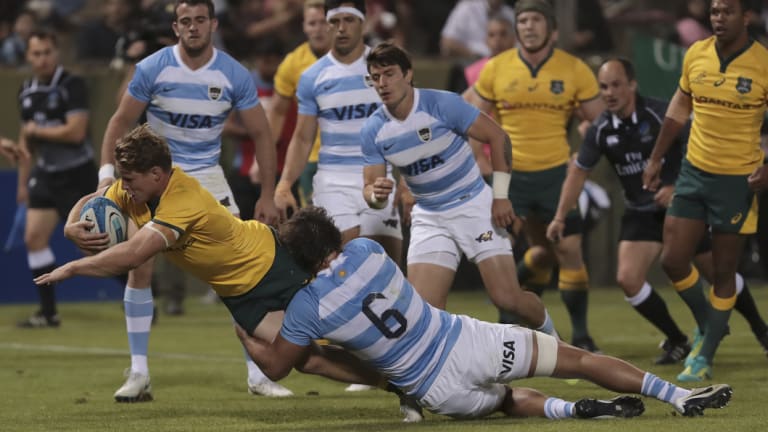 The second-half statistics were remarkable. Australia missed just three tackles in the final 40 minutes and finally, after weeks of near misses, showed their attacking flair.

“If you get the upstairs right, the rest follows,” Cheika said. “When the upstairs is working how it should be, you can overcome that adversity. We did it this time, we've got to be getting on the front foot with that and we'll have situations that we have to overcome in the future but we've also got to not let ourselves get into those situations too.”

Five-eighth Bernard Foley confirmed Cheika wasn’t having a go at him in the footage, saying he was talking about the Wallabies jersey he was wearing.

“I’ve had him for a while, so I’ve been on the end of a few,” Foley said. “He’s definitely a passionate guy, that’s how he coaches, he coaches with his heart on his sleeve and the guys responded.” 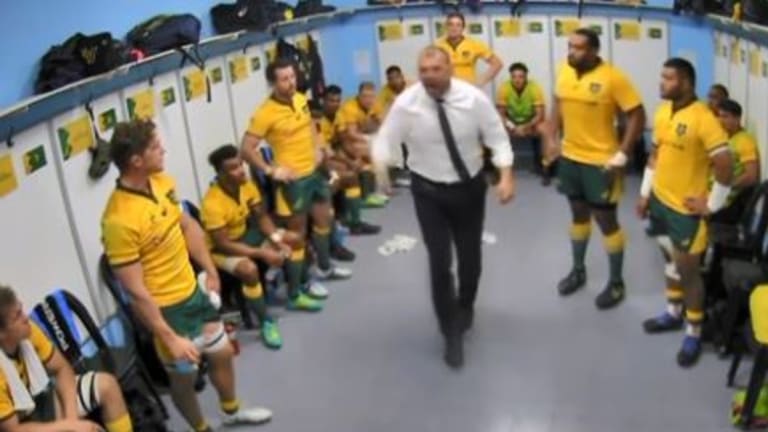 Spray it again: Michael Cheika tears into his players at half-time.Credit:Rugby Australia

Pumas coach Mario Ledesma, who was unable to get his side over the line for a second time this year, said he was not surprised by the Wallabies' response.

“The second half I expected the Australian team to react,” Ledesma said. “I expected Cheik to give a really big rev-up in the changing room which he obviously did. I don’t think they did anything different in the second half, we didn’t defend. It was almost like we did it on purpose. When you’re 31-7 up you should be a little more confident.”

“Obviously there were some stern words from Cheik which we’re used to,” Haylett-Petty said. “We needed to turn it around and it definitely started with the boys up front and they came out firing in the second half and got stuck in in defence and attack and it made it easier standing out wide.”