The clips that show why Pele was football’s greatest of all time… a ridiculous dummy to bamboozle the goalkeeper, defence-splitting runs, World Cup glory and bucket-loads of great goals

The world is mourning an icon after Pele’s death aged 82, but also celebrating a remarkable life of man blessed with talent like no other.

Fans from recent generations will not have been able to watch the Brazilian genius in full flight, but fortunately there is still plenty of footage out there to enjoy.

Regarded by many as the greatest footballer to ever play the game, cast your eye over the clips that show just what a phenomenon he was. 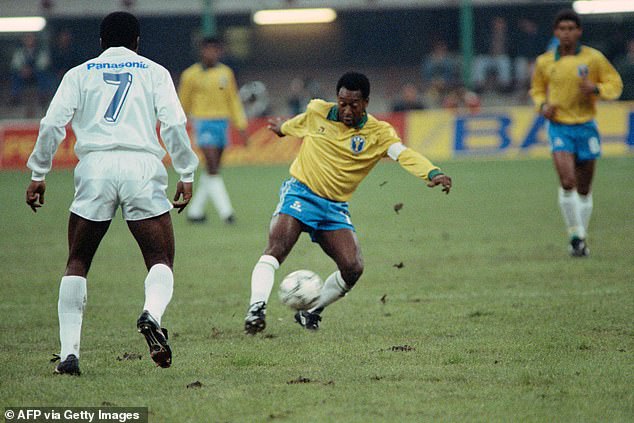 Pele is best known for performing on the global stage, lighting up the World Cup on numerous occasions and winning it three times.

From a stunning free-kick that left the goalkeeper rooted in the ground, to his knee up and volley against France and the salmon-like leap to head past the Italians in 1970, here are five of his best goals.

That Brazilian flair and sense of fun came to the fore with Pele on the pitch.

This incredible dummy against Uruguay showed not only the forward’s raw speed but also his cunning, anticipation and the ability to think two steps ahead.

What happened after the dummy was an uncharacteristic miss, but even the greats aren’t perfect.

Big players forge their reputations on the grandest stage and that is always where Pele excelled.

This clip from the 1970 World Cup shows an array of everything he could offer. It was not just the predatory instinct for scoring goals that set Pele apart.

He could beat half a dozen defenders on a mazy run, show timing and poise – as he did by feeding Carlos Alberto a perfectly weighted pass for one of the iconic World Cup goals, and would belie his smaller frame to out-jump centre-backs.

That’s not to say they were inferior, quite the contrary, and this clip shows them against Benfica when Pele was 21 in the 1962 UEFA International Cup final.

Over two legs, he scored five goals and was the clear difference between the two giants of the club game at the time.