Contrary to popular belief, Roosters board members don’t watch their team in a private suite. They sit in the stands.

They press the flesh in the chairman’s lounge before the match, chatting to sponsors, officials and celebrity supporters. When the serious business of footy starts, they make their way to their reserved seats in the members area. Chairman Nick Politis has sat in the same bay, same row, same plastic chair for 25 years. 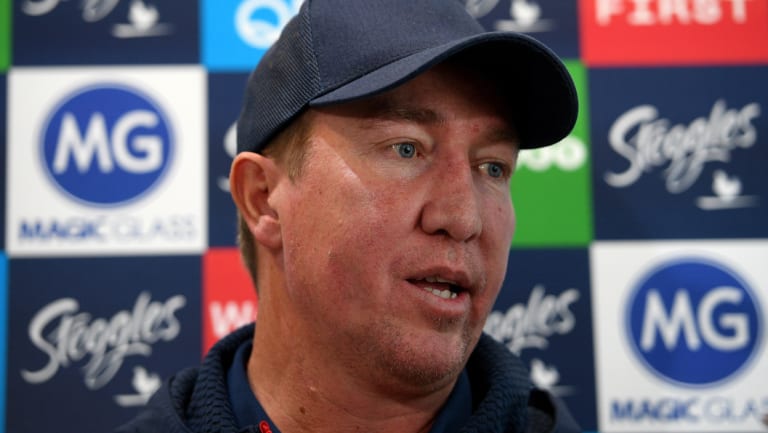 The unflappable Rooster: Trent Robinson has proven his critics wrong. For now.

On a sparkly Sunday afternoon in early May, Politis and his directors watched through gritted teeth as the Roosters struggled to bury Manly, a premiership plodder.

It was only round nine but their side’s attack looked as smooth as sandpaper.

The club had thrown the chequebook at the most successful halfback in the game, Cooper Cronk, squeezing out favourite son Mitchell Pearce. They had bought the game’s best fullback, James Tedesco.

And they had Latrell Mitchell, the game’s hottest talent.

When the Dragons rolled the Roosters on Anzac Day, Andrew Johns was beside himself in commentary for Channel Nine.

“I keep harping on the left side — Latrell Mitchell,” Johns fumed. “They’ve got a Ferrari in the garage and they never drive it; you never see him with the ball.”

Later, Johns was asked about the negativity of the Roosters’ attack.

Until this point, the Roosters had arrogantly dismissed the criticism as “outside noise” from people “who wouldn’t know”. 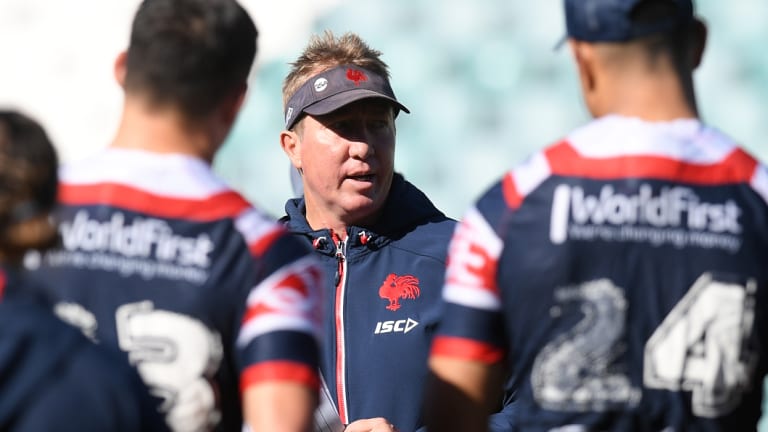 Under the cosh: Trent Robinson’s methods have drawn unflattering comparisons with Brian Smith.

This was different. Johns was on the payroll. He was the Roosters’ halves coach. An Immortal. Halfback of the Century.

Even the armchair halfback could see what Johns was talking about. The Roosters’ attack was predictable and structured.

Their directors could see it, too, but the focus of their alarm wasn’t Cronk or Tedesco or Mitchell. It was captain and hooker Jake Friend.

After the disaster of last year’s preliminary final loss to North Queensland, coach Trent Robinson promised the board that Friend would become an attacking hooker again, scooping the ball up with one hand and darting away like he did in the formative years of his career instead of a dummy-half who took one step and then passed.

In the early stages of this season, however, it was more of the same.

Victor Radley was being used as Friend’s back-up, coming on late in the game and breathing oxygen into the side. He was a backrower but the calls for him to replace Friend in the starting side were growing louder.

As a matter of course, Robinson fronts the board once, maybe twice, during the season.

The directors consider themselves backseat drivers. But, as they watched their side outlast Manly 22-20 that Sunday afternoon, with Radley making two thunderous hits on Marty Taupau and Dylan Walker late in the match, they wanted some answers from their coach.

Days later, in the boardroom at the club’s Moore Park offices, they probed Robinson about the side’s attack and, specifically, what was going on with Friend. 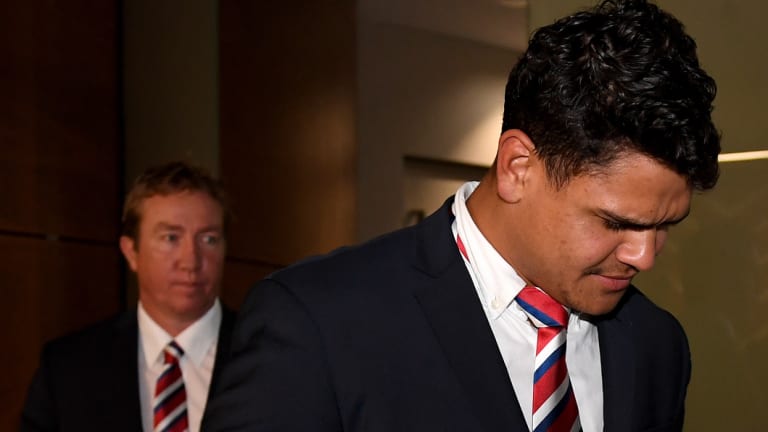 Support: Trent Robinson accompanies Latrell Mitchell to the NRL judiciary hearing where he was handed a one-match ban for a dangerous tackle.

“It would be easy for me to say Radley was now our starting hooker,” he told them. “But Victor’s a lock. Jake’s our hooker.”

With his side now just two wins away from its second premiership in six years on his watch, Robinson’s about to prove those making the outside noise that they were wrong.

He’s upfront and serious and wants to get a reaction out of the individual. Nobody can get the best out of me like he can.

“Not once has he flinched or been flustered about anything,” captain Boyd Cordner says. “At the start of the year, he came to us and said there will be a lot of press with Cronk coming in and Mitch [Pearce] going. There’s always a lot of attention when it comes to the Roosters, but he told us to expect more this year. He just kept bringing it back to us. Not once has he tried to change anything. We ended up winning the minor premiership. We’re in a preliminary final.”

Cordner, as much as any player, looked lost in the early rounds when he didn’t have Pearce to run off — but he knew it would take time. So did five-eighth Luke Keary.

“Robbo sat there at the start of the year and said, 'This is going to take a while',” he says. “We’ve worked harder this year more than any other year since I’ve been here. It’s come together now.” He chuckles. “Which is good!”

As the Roosters meandered through parts of this season, the criticism of Robinson turned personal. The line went that he was turning into Brian Smith, who employed Robinson as his defensive coach when Smith was in charge from 2010-12.

The most experienced coach in the game’s history to never win a premiership, Smith developed a reputation for being too smart for his own good. With time, his players grew tired of the Jedi mind tricks he often played. Robinson replaced Smith in 2013 and won a premiership in his first season.

The comparison between mentor and student gets peddled by several rival coaches, who reckon Robinson projects a lofty sense of superiority and intelligence — whether it’s in a coaches’ meeting or media conference.

Last month, he was asked about the closeness of the competition. His bizarre response left his fellow coaches tut-tutting in the background.

“Thank God we’ve got the salary cap to keep the competition equal,” Robinson said. “It’s been a pretty obvious circus and luckily we’ve got a highly talented group of rugby league players that get put under a salary cap and they keep producing each weekend.” 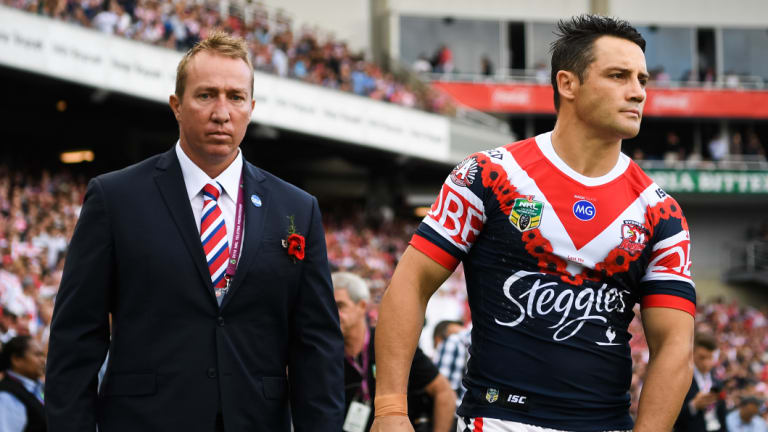 Game managers: Trent Robinson and Cooper Cronk have proved a clinical combination for the Roosters.

To steal a line from Pulp Fiction, check out the big brain on Robbo.

In his early years as head coach, the media warmed to Robinson because of his refreshing honesty. This year, he’s been noticeably careful, cryptic and sometimes adversarial.

Smith was often the same: he’d pick up the phone after two rings if his side was winning, wouldn’t reply to a text message if it wasn't.

The reason for Robinson’s change is Bradley Charles Stubbs, the self-proclaimed “coach whisperer” who has worked closely with Wallabies coach Michael Cheika and Socceroos coach Graham Arnold when he was at Sydney FC.

“I’m the one-percenter man,” Stubbs told the Herald in a rare interview in July this year. “I’m a ‘high-performance, expect-to-win' coach. I teach people how to win before the event."

Stubbs believes in the power of the spoken word, instructing coaches not to use words like “hope”, “want” and “maybe” in media conferences.

Sounds like post-structuralist gibber to you? Many at Souths thought so when Stubbs was advising former coach Michael Maguire.

Robinson doesn’t seem overly concerned about perception. “I don’t care what you write,” he told this reporter in March when contacted about a reasonably banal column about the season ahead.

Roosters players who have played under both Smith and Robinson say it’s unfair to compare them. Intense? Sure. But Robinson hasn’t discernibly changed since he replaced Smith.

“He’s completely different to Brian,” backrower Mitch Aubusson says. “Robbo is as calm as a head coach can be. He’s upfront and serious and wants to get a reaction out of the individual. Nobody can get the best out of me like he can.”

Says Cordner: “It’s more than a game of footy for him. He can out-think, out-train, out-play an opposition. We don’t have to think. We just turn up and try to execute. And, more often than not, it works.”

When Keary joined the club from Souths, he was immediately taken aback with Robinson’s knowledge of the game.

“He understands parts of the field,” Keary chuckles.

Parts of the field?

“Where you can try score tries from,” he continues. “Where you have a better percentage of scoring tries from. The probability of where you are going to end up if you catch the ball on your 10 or 20m line. He talks about the ‘feel’ of games. He’s got Cooper now. They’re both similar in how they can feel a rugby league game. It’s hard because I don’t look at footy like that. I’m more instinctual. He and I have been working really hard in the last 18 months about feeling games; about whether to pull back or inject myself. Which I didn’t understand until recently. Out of everyone I’ve ever known in the game, he understands rugby league more than anyone.”

Keary refuses to compare Robinson to Maguire, his former coach at Souths who lost the playing group after winning the premiership in 2014. But he does say this: “I’ve had coaches in the past who change when they’re under pressure. They get more intense and change things. Robbo’s a realist and says, ‘We’re not where we want to be. This is how we’re going to fix it.’”

Prop Jared Waerea-Hargreaves estimates Robinson has “lost his shit” with the players no more than twice in the past six years.

“He just has this look,” he says. “He’s got this head where you know he’s on. You just stay out of the way. I just look at the ground.”

As the big Kiwi forward says this, Cronk is chirping away to another reporter in the background.

“Robbo doesn’t need to be in the room, really,” Waerea-Hargreaves says, nodding towards his halfback, “because that’s what this guy brings.”

Robinson had no choice but to pursue a player of Cronk’s ability when he declared he was moving from Melbourne to Sydney.

Both he and Politis genuinely wanted Pearce to stay, believing they could fit Cronk, Pearce and Keary into the one side.

The club, especially Robinson, just handled it poorly. When reports started to crank up about the Roosters’ interest in Cronk, the coach didn’t pick up the phone and call his halfback.

Pearce was wounded. He felt disrespected. For a coach who cares so much for his players, it was a misstep from Robinson.

“Game manager” is the modern-day term for players who can shut out a game. Not that long ago they called him "the halfback”. Few can ice the result like Cronk, and he’s doing it with metronomic consistency for the Roosters deep into the season. He’s doing it better than Pearce did.

Cronk's high-percentage brand of football fits perfectly into the way Robinson coaches his teams. He once called defence "a living, breathing thing". For decades, it's won premierships.

He talks about the ‘feel’ of games. He’s got Cooper now. They’re both similar in how they can feel a rugby league game.

Who cares if the Ferrari doesn't get on the road as often as others might want?

So, as it stands, Robinson has proven us wrong. Sort of wrong.

He recently re-signed until the end of 2022 with Politis declaring he wants to make Robinson the “Alex Ferguson of the NRL”. A comparison to the legendary Manchester United manager sounds better than one to Brian Smith.

But a loss in Saturday night’s preliminary final at Allianz Stadium will put the heat back on him.

It would be the Roosters’ fourth loss in the grand-final qualifier in five years but, worse than that, it would be to Souths.

There’s a belief Politis hates Souths more than he loves the Roosters, which is saying something. Former captain and coach Brad Fittler recalls in 1996 when Politis made a rare appearance in the dressing-room before kick-off.

“I love this club,” Politis said. “It means so much to me — but I love beating South Sydney more. We don’t get beaten by South Sydney.”

Robinson was approached for this story but, unsurprisingly, wasn’t keen to speak.

“Prefer not to,” he texted.

Fair enough. The only opinions that matter for Robinson belong to those sitting in the stands.