The Depleted Yankees Win a Showdown With the Stumbling Red Sox

The Yankees fielded another spring training road-game lineup on Tuesday, the kind that would make pinstripes-wearing fans in Sarasota or West Palm Beach sigh. No Stanton, no Sanchez, no Andujar, no Hicks, no Bird? And we paid how much for these tickets?

Alas, this is the Yankees’ reality now, flailing in an injury sinkhole that seems to claim another player daily. First baseman Greg Bird, who has not been hitting much, went down on Tuesday with a plantar fascial tear. The Yankees have 12 players — nearly half a team — on the injured list.

“It’s a freakish thing,” said reliever Dellin Betances, who is out with a shoulder injury. “I’ve never seen anything like it.”

Freakier still was that the Yankees and the Boston Red Sox both lugged losing records into their first meeting of the season. Tuesday was the first time in 27 years that the rivals were both under .500 when playing each other at least 15 games into a season.

After an 8-0 victory over the visiting Sox on Tuesday, the Yankees were 7-9, while their rivals’ record dropped to 6-12.

The Yankees, at least, can blame injuries. The Red Sox cannot. Only one player from their 2018 World Series roster, the utility man Brock Holt — who has a scratched cornea — is on the injured list. They have just been bad — and neither team has yet faced the plucky Tampa Bay Rays, who had the majors’ best record, 12-4, through Monday.

“We’re healthy and we’re not playing good baseball,” Red Sox Manager Alex Cora said. “We’ve been inconsistent in every aspect of the game: pitching, offense, defense, base running. It’s on us to clean it up and start playing better.

“When we do that, we’re one of the best teams in the big leagues, if not the best. But at the same time, right now, we’re not. We know where we’re at, we know the way we’ve been playing, and we know the things that we have to get better at. And it’s pretty simple: Get better at everything.”

Boston’s starting rotation went into Tuesday’s game with a 7.18 earned run average, the highest in the majors. The Yankees’ mark was a respectable 4.33 — 15th over all — despite injuries to Luis Severino and sluggish performances by J.A. Happ and James Paxton.

On Tuesday, though, Paxton faced off against Chris Sale and prevailed, holding the Red Sox to two hits over eight innings and striking out 12.

Sale, whose biting slider and mid-90s fastball had deserted him in his first three starts, and catcher Sandy Leon were paired on Tuesday for the 50th time in their careers. Leon generally coaxes the best from Sale, who (before Tuesday’s defeat) had a 2.42 E.R.A. when they worked together, but a weak bat kept Leon off the roster at the start of the season. 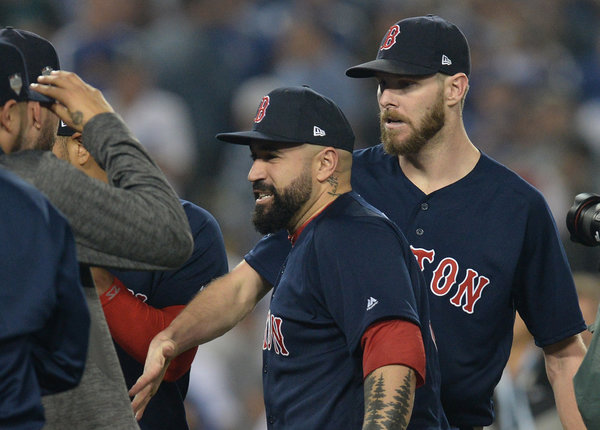 The Red Sox brought him back on Tuesday, designating catcher Blake Swihart for assignment. Swihart is a better hitter than Leon but a worse defender, and the Red Sox consider catcher a defense-first position. Their catchers had a .194 average and a .533 on-base plus slugging percentage last season, the worst marks for any world champion in the live-ball era.

“I wasn’t killing it in Triple A,” said Leon, who was 3 for 25 with Class AAA Pawtucket. “I think my strong point is behind the plate.”

Last season, the Red Sox could easily hide a light-hitting catcher; they led the majors in batting average (.268), on-base percentage (.339) and slugging percentage (.453) while scoring the most runs. Through Monday of this season, they were hitting .236/.309/.383 — worse than the Yankees in every category — while ranking 19th in runs per game, at 4.35.

“I’m finding ways to get hits, but I’m a guy who drives the ball,” said Martinez, who had just three home runs. “Until I really start doing that, I don’t feel like I’m there.”

Plenty of good teams start poorly. Dave Dombrowski, Boston’s president of baseball operations, recalled a team he worked for early in his career — the 1983 Chicago White Sox — that started 16-24 but wound up a runaway division winner. The bench coach Ron Roenicke reminded Dombrowski that a team he had coached, the 2002 Anaheim Angels, started 6-14 but won the World Series.

“You’ve got to shake out of it,” Dombrowski said. “You just can’t keep playing like this, and I don’t think we will. But am I concerned? Yeah, I’m concerned until we start playing better.”

There is no reason to think that a healthy Red Sox roster will continue to struggle. The Yankees are clearly more concerning, because of the injury onslaught.

“Got to roll with it,” Manager Aaron Boone said. “I’m sure you guys are a little sick of me saying, ‘Next man up,’ but it truly is the case. We’ve got to get guys well and get them the proper treatment to try and get them back as quickly as possible. But it’s an opportunity for somebody else to come up and impact our club.”

Clint Frazier has done that so far, and now Mike Ford will get his chance. Undrafted out of Princeton in 2013 — despite winning the Ivy League’s pitcher and player of the year awards — Ford has clawed through the Yankees’ farm system, with a detour to Seattle’s training camp last year, finally landing in the majors on Tuesday.

Ford, who once hit four homers in a minor league game and was batting .410 with Class AAA Scranton/Wilkes-Barre, will take Bird’s spot on the roster. A lifelong Yankees fan from Belle Mead, N.J., Ford was well aware of the injury barrage in the Bronx.

“It’s crazy,” he said. “That’s really the only word to describe it. But there’s so much talent regardless, we’ll be fine.”

The Yankees continue to test that theory, almost on a daily basis. The Red Sox, at full strength, would be wise to take advantage while they can.