Races like the $13 million Everest remind Canberra trainer Matthew Dale of the feeling he had watching Melbourne Cups on TV as a kid, the feeling that inspired him to get into the sport in the first place.

A year on from his bittersweet running in the inaugural Everest, Dale is buoyant about Fell Swoop's upcoming return to the track.

While a return to The Everest isn't on the cards, the seven-year-old gelding is nominated for group 1s Manikato Stakes and Darley Classic. 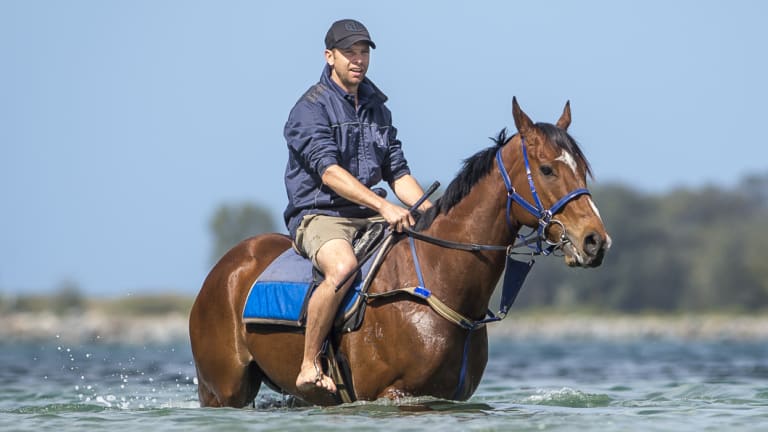 A year ago, Dale and Fell Swoop experienced the full highs and lows of racing – being part of the world's richest race on turf, but then finishing last after the horse came down with a case of the thumps, or horse hiccups.

Fell Swoop has struggled in his three races since then, finishing fifth in the listed Bob Hoysted Handicap, ninth in the group 3 Star Kingdom Stakes and eighth in the group 1 TJ Smith.

It raised fears his best days might be behind him, but Dale says the sprinter is looking the best he has in a long time.

"He hasn't been up to his best form over the last two preparations, but [he's] an older horse, a fair bit of hard racing, a little bit of wear and tear," he said.

"That's why we didn't rush him back into work and he's come up a little bit later than usual – giving him time to be as right as he can.

"There's a few positive signs there that we can be back and competitive at the races."

Fell Swoop will have a barrier trial next week before embarking on a Melbourne Spring Carnival campaign.

There are a number of options open, including the $1 million Manikato at Moonee Valley in two weeks and the $1 million Darley at Flemington a fortnight later.

"We've got him nominated for the feature sprints down there – the Manikato and the Darley – but just leaving all options open," Dale said.

"We'll just see how he progresses through the next week or so."

As a "small country trainer", Dale said he didn't know if he would ever have another top quality sprinter like Fell Swoop.

After last year's race, Dale cut a concerned figure striding down the tunnel through the Randwick grandstand, unsure what went wrong.

But the trainer said disappointment and racing go hand in hand. You lose more than you win.

Luckily it was nothing too serious with the thumps the reason behind Fell Swoop's worst run of his career.

Despite the result, Dale said The Everest experience was still second to none and brought new people to the sport.

He's put that disappointment behind him and was looking forward to enjoying this year's race from afar.

"It will probably sink in a little bit more this year, sitting back and watching it from afar because when you're involved first-hand sometimes you don't appreciate or see the enormity of it," Dale said.

"I don't have a runner there on Saturday and [I'll be] watching the coverage on TV and enjoying it from that angle.

"It's usually very inspiring, like growing up watching the Melbourne Cup on TV. It reminds you what you love about racing."

While he won't be in Sydney on Saturday, he did have a winner there on Wednesday – Shangani Patrol saluting in the benchmark 72 handicap (2200 metres) at Warwick Farm.