The fast and the curious: Speed the key but ‘big mysteries’ remain for America’s Cup rivals

Word around the docks in Auckland is that defender Team New Zealand has a faster boat than Italian challenger Luna Rossa in the 36th match for the America’s Cup.

More than the prevailing wind on the Hauraki Gulf where the best-of-13 race series begins on Wednesday, the dockside whisper has been constant that Team New Zealand’s 75-foot monohull Te Rehutai has achieved extraordinary speeds in practice sails. 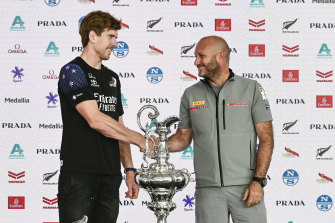 When gossip on the dock suggested it might even have exceeded 60 knots, Team New Zealand issued a denial of sorts: “Tell him, he’s dreaming.”

What has been certain over the 170-year history of the America’s Cup is the fastest boat always wins. Team New Zealand helmsman Peter Burling put it slightly differently on Tuesday: “You talk to anybody about America’s Cup racing and if you’re not fast enough, you’re not in the yacht race.”

Team New Zealand and Luna Rossa, which has Australian yachtsman Jimmy Spithill as co-helmsman, have had a long time to study each other in the three months since the regatta began with the pre-Christmas World Series which was won by the New Zealanders.

Sitting on the sidelines during the Prada Cup challengers series, Team New Zealand had the chance to watch the steady evolution of the Italian boat which – through changes to sails, foils, aerodynamics and crew work – has gained speed.

‘I don’t have a crystal ball but all I can (say) is that we’re going to give everything.’

Luna Rossa has followed Team New Zealand closely on every practice sail, assessing its performance. Both teams employ analysts who note every refinement the other makes and quantify its effect.

While that gives the teams a certain read on the other’s boat speed, both admit “big mysteries” remain, and that they won’t be sure what speed difference there is until the first race begins about 4.15pm.

“It’s a mystery for us, just like everyone else,” Burling said. “We have a pretty good feel, and both teams have been sailing in a similar patch of water a lot. But until we get to that first race when we get to line up and come off the start line together, that will be the first time both teams will have a feel for how that speed’s going.” 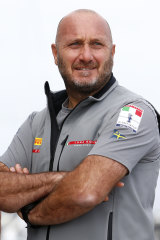 “There is a lot of people already saying the final result … we know they’re fast”: Max Sirena of Luna Rossa.Credit:Getty

Luna skipper Max Sirena similarly feels the mystery or uncertainty that always prevails before an America’s Cup can be allayed only when the teams meet on the water. America’s Cup matches traditionally have been one-sided. When Team New Zealand and Luna Rossa last met in a Cup match in Auckland in 2000, the Kiwis won 7-0. Some expect a similar result from Wednesday.

“We don’t know,” Sirena said. “There is a lot of people already saying the final result.

“It’s hard to judge performance by just watching the boats sailing. We know they’re fast because we sailed against them more than two months ago and we saw them sailing during practice. I don’t have a crystal ball but all I can (say) is that we’re going to give everything.”

Team New Zealand and Luna Rossa jointly came up with the concept of the AC75 foiling monohulls and have spent four years in the development of their race boats. During that journey, they may have taken a slightly different course. Team New Zealand has focused on out and out speed while Luna Rossa has worked on both speed and manoeuverability.

“As a syndicate, we’ve really focused on the speed aspect,” Burling said. “We’ve done everything we can to get the fastest package possible and in recent times our focus has been around making sure we don’t have any massive downsides to that.

“Looking across the way, the Italians have put together a very nice package as well and that’s what makes it so exciting come tomorrow.”

Sirena was part of the Luna Rossa team that lost in Auckland 21 years ago, and his view is coloured by that experience.

“I just had a team meeting this morning and everyone is really ready to go out and race,” he said.

“The message I passed to them is, ‘We’ve got nothing to lose, we can only win.’ We race against a team which has proved to be one of the best teams in the world for the past 35 years. What I can tell you, I feel more confident this time than all the other times I raced against them.”