Sofia Kenin, who is having the most successful season of any American tennis player, is eager to deploy her drop shot on any surface.

But the temptation has been even greater than usual at this autumnal French Open, where the cool and often humid conditions make for lower bounces off the red clay.

“Drop shot heaven,” Kenin confirmed on her way to the quarterfinals of Roland Garros.

Players, both seeded and unseeded, have definitely taken the hint in Paris.

Hugo Gaston, a quick and flashy French wild card, tried 55 drop shots and won 40 of those points in his five-set thriller with Dominic Thiem in the fourth round, losing the match but acquiring plenty of new followers.

The men’s No. 1 Novak Djokovic, who has yet to lose a set in four matches, tried more than 30 drop shots on Monday in his 6-4, 6-3, 6-3 victory over Karen Khachanov. Djokovic has said from the start of the tournament that the tactic was going to be a particularly important factor this year.

But as Djokovic knows too well at age 33, drop shots do not always lead to paradise.

They run the same risk as potato chips: once you open the bag, it can be hard to resist the temptation.

“I love the drop shot but maybe too much,” Djokovic acknowledged on Monday.

Gaston also indulged himself too often down the stretch and eventually began missing on critical points; but not before making a deep impression on Thiem, 27, a great athlete and clay-court master who has chased down enough drop shots to be a connoisseur.

“I haven’t seen for a very long time a player with such a big touch in his hands.” Thiem said. “His drop shots are just from another planet. I was sprinting like 400 times to the net.”

It was a delicate dance for Gaston, but surely the right play considering that standing at the baseline and exchanging full-cut topspin groundstrokes with the powerful Thiem would have played right into Thiem’s strengths.

“Perhaps at the end there were three or four shots that weren’t quite right for the moment in the match,” said Marc Barbier, Gaston’s coach. “But you can’t criticize him for that. Hugo has to find and search for solutions to avoid confronting Thiem on his terms. In trying to be creative, Hugo exposes himself to the counterattack but also exposes himself to making a bad choice. You can’t have regrets.” 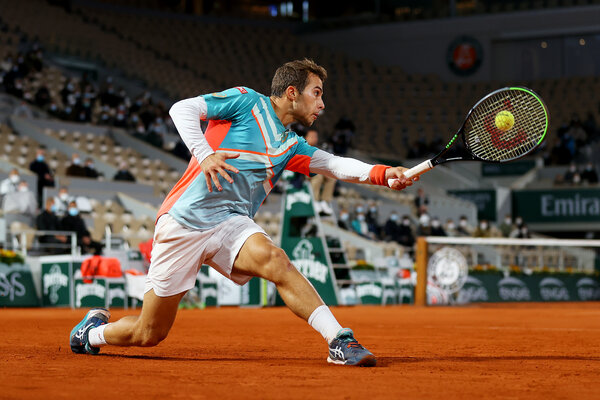 A bad drop shot is usually about as effective as a double fault, but a good one is a thing of cruel beauty: a wicked change of pace, preferably hit off the same backswing as a full-force groundstroke and then sliced with just the right feel to barely cross over the net and die a glorious death in the clay.

Put too much arc on the ball or hit the shot from too far behind the baseline and hard-running players like Thiem will easily track it down. Fail to disguise it and players will start to sprint forward before the drop shot is deployed. But time it correctly — as Djokovic, Kenin, Gaston and others have done so often this year — and the rewards are often immediate.

“I have different stuff that I really like, but the drop shot is definitely a key,” Kenin, the 2020 Australian Open champion, said of her game. “It’s a great factor, especially on the clay.”

Her opponents have often not even tried to run down some of her best efforts. She hit nine drop shot winners against Fiona Ferro in her 2-6, 6-2, 6-1 victory in the fourth round on Monday, using the tactic with her forehand and her two-handed backhand.

“I was having a hard time reacting, especially when she was playing her regular strokes deeper,” Ferro said.

Powerful, deep groundstrokes can set up drop shots, which is part of the reason Djokovic’s are usually so effective.

“With the opponent fearing the big shot, the tendency is to back up, and that’s the ideal moment to use the drop shot,” said Mats Wilander, a three-time French Open champion in the 1980s, in an interview with L’Équipe. “You change your grip and voilá, there it is.”

But drop shots can also set up powerful, deep groundstrokes.

In the third round, qualifier Irina Bara was so bamboozled against Kenin that on several occasions, she started to move forward in anticipation of a backhand drop shot only to have to quickly change plans and directions when Kenin went for a flat, two-handed backhand drive instead.

In French, the drop shot is called an “amortie,” which translates as “cushion” or “shock absorber” — a fine way of putting it when you watch a player like Kenin or Gaston absorb an opponent’s power and respond with deft spin.

Spanish-speakers call it a “dejada,” which comes from the verb dejar, which means “to leave” something, like keys on a counter. But leaving the ball out of your opponent’s reach is not always necessary for a drop shot to be effective. It is often a combination-punch: all the more so on a low-bouncing surface like the red clay of Roland Garros in the fall of 2020.

Time and again, Thiem would slide forward and get a racket on a Gaston drop shot but fail to do much more than poke the ball back into play, leaving Gaston free to lob him or rip a passing shot.

The classic clay-court duel is a drop shot answered with another drop shot: frequently on display as Djokovic played Khachanov. The prospect of that counterattack is why it is generally wise to follow a drop shot into net, which means that both players end up there together: not the way it typically works on faster surfaces in singles.

It has led to some spectacular exchanges in Paris: reflex volleys, extreme angles and lunging athleticism. And though much is far from ideal about the French Open this October — small crowds, mandatory masks and dreary weather — drop shot mania is a fine consolation prize.

“It definitely is the right play here this year,” Kenin said.