Pressure is mounting on David Peever, with former Cricket Australia and International Cricket Council supremo Malcolm Speed on Tuesday calling for the besieged CA chairman to be replaced amid rumblings some states could support a move against him.

As the game’s senior administrators and officials digested the damning findings of the 145-page Longstaff report, scrutiny on Peever’s position at the helm intensified. The chairman is standing firm despite CA being exposed as having an “arrogant” and “controlling” culture under his watch, with the organisation being found to share wider responsibility for the ball-tampering crisis in South Africa in March. 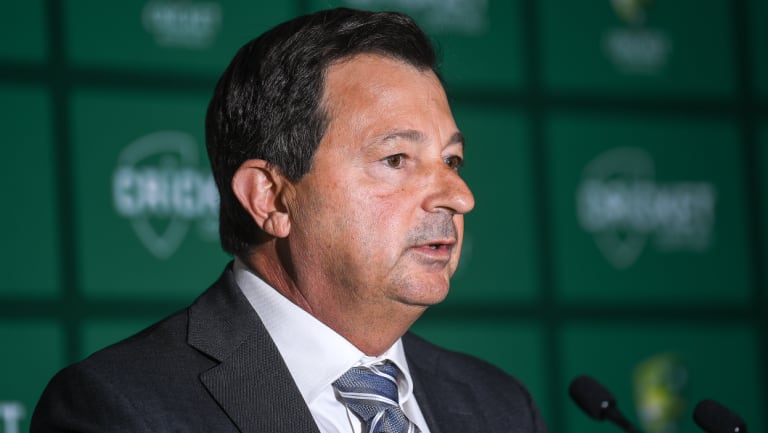 Peever also wore criticism for what was perceived as a shambolic appearance on the ABC’s 7.30 program on Monday night in which he described the sandpaper scandal as a “hiccup”.

Speed said on Tuesday that “the game deserves better leadership”, calling for Mark Taylor to be elevated from his director’s role to the chairmanship. With Peever seemingly unwilling to stand aside, though, it may be left to the six state associations to force the issue if they see fit.

The states re-elected Peever for a second three-year term at last week’s CA annual general meeting and four of the six would have to turn against him for a change at the top to be implemented. Only one state is required to call an EGM. That would be a remarkable occurrence, but there is discontent in some quarters – particularly about the fact they were not shown a copy of the Ethics Centre report before Peever’s re-election.

State chairmen and chief executives had arrived in Melbourne believing they would be able to view it before last Thursday’s AGM but instead had to wait until afterwards and were then only shown it for 45 minutes before being asked to hand it back. The board of Cricket NSW was holding a scheduled meeting last night at which the release of the report was expected to be on the agenda.

Speed said the fact the Longstaff review was not shown to states before Peever’s re-election indicated a worrying lack of transparency.

“I think from a governance perspective that’s far from ideal,” Speed told the Herald. “The state associations are the owners of Cricket Australia, they are the members and they elect the chairman of the board. To withhold a sensitive report like this from them until after the AGM shows at least a lack of trust and possibly a lack of confidence in their response to the report if they had it ahead of the AGM.”

Chief executives from South Australia and Queensland spoke publicly in support of Peever yesterday, endorsing him as the chairman, as did Cricket Tasmania chairman Andrew Gaggin.

CEOs from NSW and Western Australia said their states’ positions on Peever and CA were a matter for their boards.

Taylor said yesterday it was “far too early to be making any rash decisions”. “Let’s wait for things to settle down in the coming weeks and work out what’s best for the game going forward,” he said.

Speed has a different view, saying Peever’s emergence as the first CA chairman from the corporate world was not unrelated to the game’s cultural crisis.

“I watched the 7:30 report [and] at the end of the interview, when [Peever] was talking about something that I would regard as orchestrated cheating, David Peever described this as a hiccup,” Speed told ABC radio.