GREENSBORO, N.C. — As advanced statistical analysis and its attendant new technology continue to reshape how sports are understood, watched and even played — when to punt on fourth down in football, where to position a baseball team’s infielders and how to build a winning basketball team — these new numbers also create a vexing problem:

How to account for what complex algorithms cannot explain.

The thirst for information is such that one essential set of college basketball data that will help determine the field for this month’s N.C.A.A. tournament, Ken Pomeroy’s eponymous KenPom ratings, includes a metric to shed light on when things do not actually go by the numbers.

Pomeroy has a rather analog term for it: luck.

“Luck is basically performance in close games,” Pomeroy said. “People generally don’t like the term ‘luck’ — that’s the feedback I get. Technically, I’d call it ‘randomness’ or something a lot more wordy, but that doesn’t fit well above a column.”

In short, KenPom’s luck factor considers the difference between a team’s record and what the data would expect it to be. If a team’s record is better than its predictive numbers, it is lucky. If it is worse, then it is unlucky.

This season, according to the KenPom ratings, no team among the 353 Division I college men’s basketball programs has been luckier than the University of North Carolina at Greensboro.

The Spartans resemble a team one might expect from a coach, Wes Miller, who transferred to North Carolina as a walk-on, then earned a letter on a national championship team and eventually a spot in the starting lineup. They are resourceful and determined, and have the ethos (and the recruiting budget) of an underdog.

Greensboro has a 28-6 record — the best in program history — and finished second in the Southern Conference, behind Wofford, which was ranked 20th in this week’s Associated Press poll.

Did luck have something to do with it?

Miller, pulling up a folding chair before a recent practice, reacted as one might expect. He praised Pomeroy as “a genius,” expressed fascination with analytics and said there were others on his staff who delve deeper into the data to provide the most salient information about the Spartans and their opponents.

Then he assumed a defensive stance.

“I’m not a mathematician,” he said. “I’m a basketball coach who’s always trying to figure out an edge to help me coach better. But there’s never been anybody that could put a number on will and togetherness of group.

“There’s something that’s happening in our games that’s indescribable to his data that’s getting us over the hump,” Miller added. “That’s toughness. That’s the ability to win close games. The proudest I ever am as a coach is when we have an awful shooting game or we have an awful offensive game and things don’t go our way and we still find a way because our team was able to dig down and figure out a way to get over the hump.”

Francis Alonso, a senior guard from Malaga, Spain, who is the heartbeat of his team, put it another way: “There’s this saying — it’s champions’ luck.” 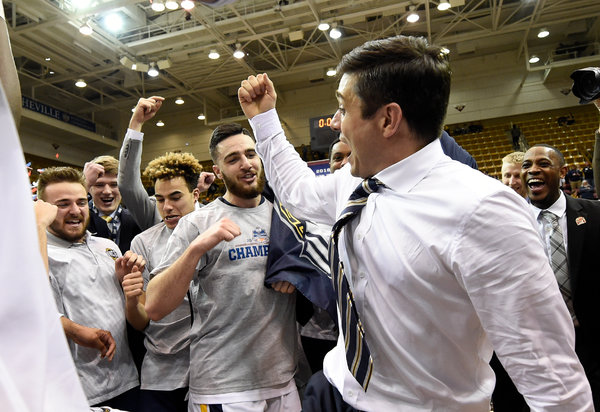 Alan Castel, a psychology professor at U.C.L.A. who studies memory and metacognition — how we think about our thinking — said that while confidence (or the lack of it) is a fundamental element of athletic competition, it is often misplaced.

“The human mind doesn’t rely on big data,” said Castel, whose research has debunked the hot-hand theory — the belief that a team should get the ball to a shooter who is on a hot streak. “We’re prone to rely on illusions and small sample sizes and what we want to think.”

If Greensboro’s Spartans are the luckiest team in the country, he said, they deserve some of the credit for it.

Or, he added, to win the N.C.A.A. tournament, you need to get in. And to do that, the Spartans almost certainly will require a little more luck.

Some years ago, a résumé like the Spartans’ might have looked glossier. They have a sparkling record, are 7-0 in games decided by 5 points or fewer and have been competitive in defeats at 10th-ranked Louisiana State (97-91) and sixth-ranked Kentucky (78-61), a game that they led with less than nine minutes left. But they lost to Wofford twice in the regular season — by 29 and 30 points — and for a third time on Monday night, 70-58, in the Southern Conference tournament championship game.

Yet it is this profile — a team that has squeaked past bad teams, competed against good ones and been pounded only twice, by the best team in its conference — that explains why Greensboro’s luck factor is +.175, which, if it holds until the season is over, would be the highest of any team since 2013.

What that figure means, Pomeroy said, is that in a luck-free environment, the Spartans’ winning percentage would be 0.175 lower than it is. As a result, they would have six fewer victories — and a 22-12 record — without any luck.

There are real-world consequences: Through Tuesday’s games, Greensboro ranked 81st in KenPom’s overall ratings, lagging behind East Tennessee State (71st) and Furman (55th), against whom they combined to win four of five games this season. (The N.C.A.A.’s new NET metric, which the tournament selection committee is using to evaluate teams this year, is only slightly kinder: It has the Spartans 58th.)

Once the N.C.A.A. tournament begins next week, with a broad spectrum of schools from around the country, a clearer picture will emerge of whether teams that have been deemed to have enjoyed metric good fortune have punched above their weight all season.

The Spartans, at this point, would consider themselves lucky to have the chance.