The Mets tend to learn a lot about themselves in June. Last season, they started the month with a .500 record. By the start of July they were 16 games under, buried too deep to be relevant in the pennant race.

On Tuesday, the Mets left Yankee Stadium the same way they entered: one game below .500. But their 10-4 victory in the second game of a doubleheader — after a 12-5 drubbing in the opener — gave them five wins this June. That matches their total number of victories for all of last June.

Frazier made a two-out error on Tuesday afternoon, extending the fourth inning before the Yankees’ Luke Voit drilled a three-run homer. In the nightcap, Frazier watched from the on-deck circle as Pete Alonso smashed his own three-run homer in the first inning, sending the Mets on their way.

After the game, Frazier motioned to Alonso a few lockers down his aisle in the visitors’ clubhouse. Alonso, the rookie slugger, had already filled reporters’ notebooks with postgame comments. Now he was alone with his own notebook and fresh memories.

“Look at Pete right now — he’s writing things down, studying, saying what he saw and how he felt,” Frazier said. “It’s a lot of fun right now. Even though we’re five games out, it’s all right. We just keep playing at that level and when we play the teams we’ve got to beat, we’ve got to win those series, that’s it.”

The Mets will host the St. Louis Cardinals for four games at Citi Field starting Thursday. From there, they play 11 road games in 11 days against teams now holding National League playoff spots: the Atlanta Braves, the Chicago Cubs and the Philadelphia Phillies. A homestand with the Braves, the Yankees and the Phillies leads the Mets into the All-Star break.

“Our starting pitching has really been on a roll, and that’s kind of where we want them at — pitching deep into games, taking pressure off our bullpen — and I feel like our offense has been coming along,” Manager Mickey Callaway said. “So I think we’re primed to go out in this tough stretch and be the best team we can possibly be, which we’re going to need to do.”

Jason Vargas won the nightcap and has a 1.67 earned run average in his last four starts. He cannot sustain that, to be sure, but it seems safe to assume that Vargas is now who he was in Kansas City: savvy enough to be slightly better than league average. For a No. 5 starter, that is enough.

To really compete, though, the Mets need more consistency from their top four starters. Jacob deGrom, Noah Syndergaard, Steven Matz and Zack Wheeler have made 53 starts with a combined 4.22 E.R.A. They are much better than that, and Wheeler’s start on Tuesday was a microcosm. He felt great, he said, but only two of his four pitches were effective, and he gave up five earned runs. 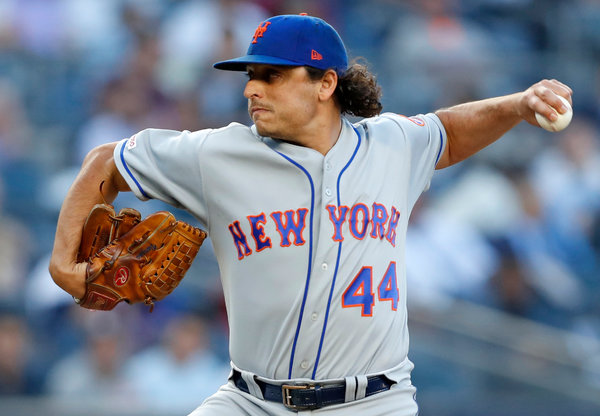 He has a point — the Mets ranked 28th of the 30 teams in overall defense before Tuesday’s games, according to Fangraphs — but there is no defense for the home run. Wheeler allowed two on Tuesday, bringing his total to 13 allowed in 14 starts. With one more, he will match his total from last season, when he made 29 starts.

This is consistent with the trend around baseball, where fly balls are clearing fences like never before. The average game featured 1.35 homers before Tuesday, up from the record of 1.26 per game in 2017.

“I think everybody knows, sort of, what’s going on,” Wheeler said. “It is what it is, I guess.”

You could sense Wheeler squirming with his words; he did not want to make excuses, but it’s no secret that a tighter baseball is changing the game. The league commissioned a study last year that said baseballs were flying greater distances through the air because of a decrease in wind resistance, though it could find no reason that would be happening.

In any case, when Class AAA switched this season to the same ball used in the majors, home runs — surprise, surprise — soared. Through Monday, the El Paso Chihuahuas, a San Diego Padres’ affiliate, had a team slugging percentage of .546, which fits right between the career slugging percentages of Giancarlo Stanton (.547) and Mike Piazza (.545).

There seems to be a new home run achievement in the majors every day. On Sunday in San Diego, four batters in a row hit home runs for the Washington Nationals. On Monday in Philadelphia, the Phillies and the Arizona Diamondbacks combined for 13 homers, a single-game record.

The Yankees ranked seventh in the majors in homers through Monday, impressive considering that Stanton and Aaron Judge have been injured for almost the entire season. Stanton, out since late March with injuries to his biceps and calf, is on the rehab trail — he homered in a Class A game in Tampa on Tuesday — and Judge (oblique) could start an assignment this weekend.

Without Stanton and Judge, Alonso has become the pre-eminent New York slugger. His power is prodigious, lively ball or not, and he showed it with his Tuesday night laser off James Paxton into the Mets’ left-field bullpen.

Alonso did not take advantage of the cozy right-field dimensions in the Bronx, but he will remember. He will visit once each season for years to come.

“They don’t want to leave one out over the dish,” Alonso said of the Yankees. “Didn’t really get a chance to use that short porch in right, but I’ll keep that in the notebook for later.”