In 1979, a 37-year-old Margaret Caldow captained the Australian netball team to a World Cup title in Trinidad and Tobago.

Caldow, a legend of the game who is regarded as one of the country's finest ever netballers, left two children behind to answer the national call.

She combined parenthood and netball her entire career, returning to play after each of her births using little more than her commonsense to guide her. Across a 17-year international career she won three World Cups with the team now known as the Diamonds, two of them as their captain.

Forty years later Australian rugby sevens star Emilee Cherry is following in Caldow's footsteps. The Olympic gold medallist gave birth to her first child – a daughter, Alice – in June last year and is now on the comeback trail in a bid to be back in the thick of the action when Australia defend their gold medal at the Tokyo Olympics in July. 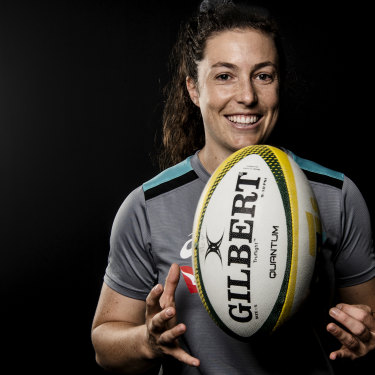 Cherry could not complete a sit-up four months after giving birth but found running came back quickly. Credit:Louise Kennerley

"I feel really great. It was such an unknown going into it, everyone's experiences are so different and coming out the back of it now, it’s really positive," Cherry says. "My body, it hurts at the moment being back in full training, but everyone in the team is hurting as well. It's a tough block. But I am really positive and Tokyo is still definitely on the cards at the moment."

Much has changed in the four decades that link Caldow and Cherry. Netball and rugby both now have world-leading pregnancy policies, which give players employment certainty through pregnancy, guaranteed opportunities to claim back their spots and financial support to take a carer away on tours or at training. Cricket Australia went one step further this year with a policy that guarantees a paid carer until the child is four years old.

What has not changed is a near-total absence of research in the area, studying not only the physiological aspect of athletes' post-partum return but the psychological and social aspects too. "The juggle", as it's known among the general population, which is demanding enough for new mothers, let alone mothers who are elite athletes in the prime of short careers.

Despite all of the advances in sports science and medicine over that period, Cherry and others – Serena Williams, six-time Olympic gold medal-winning track star Allyson Felix, Diamonds superstar Laura Geitz – have all had to make it up as they go along. 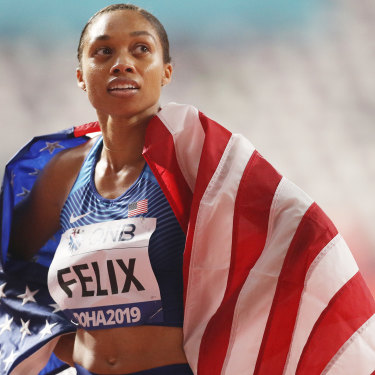 "It was uncharted waters, especially going into contact sport," Cherry said. "We have seen other women in sport going through (after childbirth) but the demands our sport puts on your body is absolutely huge, there are so many different physical components that you need."

Diamonds coach Lisa Alexander is blunt on the subject.

"It's part and parcel of the world of sport with the lack of any sort of research into female athletes," she says. "It's all around male athletes at the moment. White male athletes, if you want to really talk about this. There's not even the research into the menstrual cycle and how it affects performance.

"The American soccer team used their own anecdotal evidence (period tracking) to help them individualise their training over the World Cup period. We've always gone with this 'this is how we'll do it this time and we'll just get through it' approach."

Australian marathon runner Jess Trengove is working through a similar experience. The two-time Olympian and Commonwealth Games bronze medallist is a first-time mother to 10-week-old Billy and is also trying to make it back in time for Tokyo.

Jess Trengove on her way to the first of two Commonweatlh Games bronze medals. Credit:Clive Rose

Trengove considered herself better prepared than most to navigate the post-partum period, as a physiotherapist and a competitor in a sport with many precedents of women returning to international competition and excelling (Australia's Kerryn McCann, Lisa Weightman and Eloise Wellings, Ireland's Sonia O'Sullivan, Ethiopa's Tirunesh Dibaba). Still, she was shocked.

"I expected to find more information quite easily and I realised there was a big gap," Trengove said.

Trengove and her team consulted with numerous professionals in the area of high performance sport and health care including exercise physiologists both local and abroad, nutritionists, sports doctors and physiotherapists. This highlighted the risk of bone stress injuries in the period after giving birth particularly for athletes who exclusively breastfeed.

"It's made me really passionate to hopefully be able to work in that field. There's still a bit of the old school train of thought that it's dangerous for women to train while pregnant and post partum. There are parameters, for sure, but there are lots of benefits to exercise as well, for all women."

Trengove and Cherry's experiences are borne out in one of the only pieces of academic research on the subject the Herald could pinpoint.

The Norwegian study, published in November last year in the British Association of Sport and Exercise Medicine Journal, used a group of 34 Norwegian international-level athletes and a control group of active women.

It noted, "most athletes felt that their performance level was the same or better after becoming mothers, and none of the groups were satisfied with the training/exercise advice and the most important practical challenge was having enough time for recovery".

The study also noted with alarm that four women in the athlete group were recommended by coaches and physiotherapists not to breastfeed "for no other reason than possible impaired performance", that there was "limited advice" on energy-intake, nutrient-intake and strength training and, in an echo of the advice given to Trengove, that 12 per cent picked up stress fractures.

"We are embarking on quite a different era where it is much more commonplace for female athletes to be mothers," UTS Business School's Associate in Sport, Women and Gender Equity, Dr Johanna Adriaanse, says. "But it seems from this research that there is much more guidance needed on how to continue your training while pregnant and after training."

Then come the logistical and emotional factors of adjusting to life as a new mother. Felix and fellow American track athletes Alysia Montano and Kara Goucher have all spoken candidly about their battles with sponsor Nike around their pregnancies. Tennis superstar Williams made a raw expression of the phenomenon of ‘mum guilt’ in 2018, when she admitted there were days she felt she was not a good mother and not around as much as she wanted to be.

In the same year, World Cup-winning Diamonds wing defence Renae Ingles returned to Super Netball after the birth of twins with NBA star husband Joe. She capped that triumphant return with selection in the Australian squad that August, but withdrew a month later. 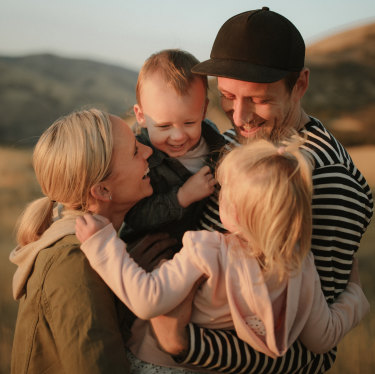 Family time: Joe and Renae Ingles with 'The Twingles', Jacob and Milla.

"It was an honour to be named in the initial squad last month," Ingles said at the time. "But I know the commitment required to be a Diamond, especially ahead of a World Cup, and I don’t believe I can commit 100 per cent when my family comes first at this point in my life."

Like many families who have the same tough conversations early on, Ingles and her husband, who were based in Utah, knew something had to give. This time, it would be Ingles' career. She played out the 2019 season with the Melbourne Vixens before retiring.

"It’s just been a tough year off the court," she said. "It’s not doom-and-gloom-tough, it’s just tough. It’s just a never-ending feeling of being quite tired, and I’m used to that, and I feel like that is parenthood.

"Turning up to training and turning up to games each weekend, it’s taking a lot of my energy to do that each and every week. I wouldn’t change anything – it’s just logistically challenging."

Alexander, the woman who'd selected Ingles for the World Cup in 2018, witnessed that decision close up.

"I can't say it any other way, it gets more difficult to be totally focused on the job at hand, it just is," she says. "It becomes really difficult to be that level of self-centred and selfish around the clock. At the end of the day, you can train like you used to but if you don't have the time to recover, it makes it really hard for athletes to be at their best."

Cherry is making choices along the way. When Alice was four months old she stopped breastfeeding to simplify her daily schedule, which requires her to spend longer and longer periods away from her daughter. Blessed with the near-mythical "good sleeper" of babies, a supportive partner and parents who are close at hand, Cherry is planning on leaving Alice with them when she travels with the team on the World Series circuit.

She and Trengove are reporting unexpected benefits, another trend backed up in the Norwegian study, which found the majority of athletes reported normal or better performance levels after child birth.

Cherry and her support team treated her comeback as a "whole-body rehab program", giving them an opportunity to work on her weaknesses and further improve on her strengths. She was shocked when a sit-up was beyond her reach at four months post partum (core muscles require the most targeted, sustained and specific work) but is now clocking fitness personal bests.

Logging the required kilometres with son Billy on the scene continues to be a challenge for Trengove, who must run an Olympic qualifying time of 2:28:30 by the end of May. But the 32-year-old says Billy has cured her of her anxiety around sleep. Where she used to record her hours, now she is grateful to wake feeling fresh and ready to train.

"It's refreshing," she says. "I still have the determination I've always had but at the end of the day I'm wanting to share the journey with my husband and Billy and as long as they're happy, I'm happy. Everything I do in running will be a bonus."

Cherry's coach, John Manenti, says he's enjoyed watching the evolution of one of the world's best rugby players. As a father of four he understands the road ahead for his star centre, who is known within the squad as "GOAT" (greatest of all time).

"Now we're getting close you can see the competitiveness in her come out again and that's always what set her apart as one of the best in the world. She doesn't want to just play footy again she wants to be the best again and win a gold medal again," says Manenti, who will next week select Cherry for her first World Series tournament since her return. 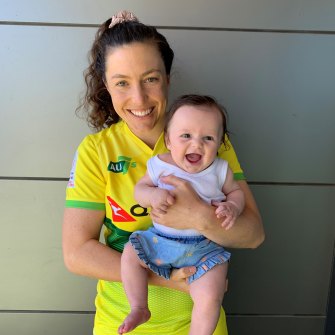 "It's not coming back from a knee injury, it's much more significant than that and, on top of that, there's someone who's relying on you and you're relying on others to help with that."

But it is possible. Like Williams and Geitz and McCann and others, including Margaret Caldow 40 years before them, Cherry will push the limits of what is considered achievable and, hopefully, the research will follow.

"Some people think it's amazing that a front-rower is coaching sevens, so gold medallists getting pregnant and returning to win more gold medals, is anything impossible?" Manenti says. "We're pushing the envelope every day and we're trying to keep achieving. If we can do it with Emilee we'll keep doing it and she'll be another woman in history who pushes things forward."