The Rays Are a Surrealist’s Delight

ST. PETERSBURG, Fla. — A mile and a half from the locus of baseball surrealism is a monument to the master of the medium. The Dalí Museum, home to more than 2,000 works by the Spanish artist Salvador Dalí, makes a fitting neighbor for the Tampa Bay Rays.

The Dalí collection is a testament to the joys of challenging reality and bending expectations, of hiding curious visions in plain sight. A woman staring at the sea becomes a portrait of Abraham Lincoln. Images of the Venus de Milo meld into a toreador. A weathered, craggy cliff turns into an old man’s face.

“He always took great risks,” the museum’s website says of its muse, “and proved how rich the world can be when you dare to embrace pure, boundless creativity.”

Dalí died in 1989, a year before the unveiling of the domed stadium now known as Tropicana Field, where baseball executives, coaches and players strive to see beyond the obvious. It was a marvel, at least to a 12-year-old second baseman from Tampa who played Wiffle ball there at the opening ceremony.

“It was just concrete on the ground for concerts and stuff — they weren’t completely finished with everything on the inside — but it was pretty cool then,” said Kevin Cash, the Rays’ manager. “Time has probably gotten us a little bit.”

The Trop, as it is known, is now a one-of-a-kind venue, and not in a good way. It is the only ballpark in Major League Baseball with a roof that cannot open, and the only one that does not sell any seats in the upper deck.

The team tries hard to create a lively atmosphere, and there is a virtual carnival on the field-level concourse beyond the outfield fence — an arcade, a sports bar, a touch tank with live rays. Yet attendance remains the worst in the American League, at an average 14,540 per game.

That is part of the reason the Rays have the lowest payroll in the majors, at $60 million, according to Baseball Prospectus — less than the combined salaries of the Yankees’ Giancarlo Stanton, Masahiro Tanaka and Jacoby Ellsbury. But that only underscores another kind of charming absurdity: One of the least-watched, lowest-paid teams is also one of the best.

The Rays stood at 26-15 entering Thursday’s games, good for first place in baseball’s Tiffany division, the American League East. Since the 2018 All-Star break, only the Houston Astros have a better record than the Rays, who are 67-40 in that time.

The richest teams still dominate the game. The Boston Red Sox won the 2018 World Series with the most expensive roster in the majors, and the Los Angeles Dodgers, who have ranked in the top four in major league spending every season since 2012, have won the last two National League pennants.

But amid concerns that tanking teams are damaging the sport’s competitiveness, the Rays have managed a third way: spending less and winning more. 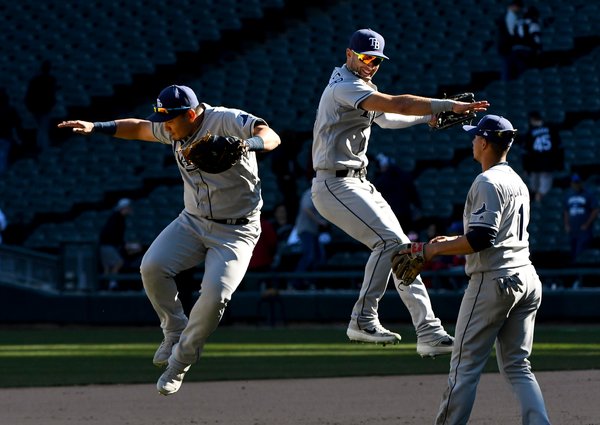 They pulled the same trick at the end of the last decade. After 10 losing seasons as the expansion Devil Rays, the franchise changed its name and its fortunes in 2008, reaching the World Series despite having the lowest payroll in the A.L. The Rays made the playoffs again in 2010, 2011 and 2013.

Since then, big-market teams have poached from the Rays, with the Dodgers hiring their top baseball operations official, Andrew Friedman, and the Chicago Cubs luring their manager, Joe Maddon. The Rays caught on early to the analytics wave, but now every team actively seeks to innovate.

“If we’re doing something today that we did five years ago — other than hard play — everybody’s going to pass us,” said Mitch Lukevics, the Rays’ farm director, who joined the organization in 1995. “As you and I speak, somebody’s thinking up something that could be valuable.

“That’s not the way it was 10 years ago. The transition started to come in the last five years. My god, it’s a whole different ballgame.”

The Rays helped chart the industry’s course. The principal owner, Stuart Sternberg, who built his fortune in financial securities, bought the team in 2005 and applied Wall Street principles to running it.

Yet many of their early tactics have been widely imitated, like aggressive shifting on defense and the use of multiple-position players, or legislated out of the game, like the stockpiling of draft picks, which helped them land a future Cy Young Award winner, Blake Snell, in 2011.

The Rays have strengthened their international scouting efforts in recent years and continued to choose boldly in the draft. In 2015 they drafted infielder Brandon Lowe, the A.L. rookie of the month in April, after he had broken his leg two days earlier. With their only top-10 pick in this decade — fourth over all in 2017 — they chose a two-way player, a position player who can pitch, in Brendan McKay, one of three they are now developing, with Tanner Dodson and Jake Cronenworth.

“We pride ourselves on being as ahead of the game as we possibly can, but what gets lost in that is it’s not just about the ideas,” said Chaim Bloom, the Rays’ senior vice president for baseball operations. “It’s about who’s implementing them, how we work together and the trust that we have in each other. That’s not to say we do that perfectly, but hopefully if we are taking care of that culture in the right way, we’re creating an advantage that is not easily mimicked.”

The Diamond as a Laboratory

Outfielder Tommy Pham wasn’t quite buying what the hitting coach Chad Mottola told him late last season, a month after Pham had joined the Rays in a midsummer trade.

“Our analysts have us pegged as the No. 1 team in baseball next year,” Pham said, recalling the conversation. “At the time I was like, ‘I cannot believe what they’re saying.’ But at the end of the season I was like: ‘You know what? You might be right.’ They told me things and, looking back at it, they were always right.”

The Rays emphasize innovation and collaboration, challenging long-held ideas about how teams should pitch, hit and practice. That aim is embodied by a uniformed analytics coach, Jonathan Erlichman, who holds a mathematics degree from Princeton, where he played club hockey.

“Since he comes from a nonbaseball background, he’s like a little kid: ‘Why do you guys do that?’” infielder Matt Duffy said. “And we’ll say, ‘Well: this, this and this.’ And he’ll say, ‘Well, why do you do that?’ The response to every answer you give is ‘Why, why, why?’ And that’s where the dialogue starts.”

Not everything has worked. In 2016, the Rays tried to cultivate knuckleballers, without much luck. Their slugger-heavy offense of 2017 produced the sixth-most homers in baseball, but also the sixth-fewest runs and second-most strikeouts.

The Rays emphasize power now, but in a different way: Through Monday, their hitters had the highest exit velocity in the majors, at 90.1 miles per hour, and their pitchers — who specialize in curveballs and high fastballs — allowed the lowest, at 86.3. Hard-contact rates enticed them to trade for Pham from St. Louis last July, and to land Yandy Diaz in an off-season deal with Cleveland. Pham was hitting .248 for the Cardinals, but the Rays assured him he had simply been unlucky; he hit .343 the rest of the season.

The Rays also upended long-established pitching roles with their use of the opener. They still prize elite starting pitchers, like Snell, Charlie Morton and Tyler Glasnow. But on other days, they often use a reliever to start the game, and piece together the rest.

Last Saturday, against the Yankees, the Rays used Ryne Stanek for two innings, Yonny Chirinos for four, Diego Castillo for two and Jose Alvarado for one. The Rays — who induce more swinging strikes than any other staff — allowed just five hits in a 7-2 victory.

“Stanek throws hard, throws a four-seamer, and then we bring in Chirinos, who’s got a split, a sinker and he can move the baseball,” Alvarado said through an interpreter. “Castillo, who throws really hard, comes in after that, and then you bring in myself, and I also have a lot of movement on my ball. So I think it confuses the hitters and it definitely throws them off.”

Other teams deploy the opener here and there, but only the Rays and the Los Angeles Angels have done so consistently this season. The results for Tampa Bay: a 2.42 E.R.A. for their starters, by far the best in the majors, including a 1.45 mark by their openers.

The opener is an exercise in game-planning to give players the best chance to succeed. Refining their skills is a matter of development, often at the major league level, by coaches who were once top prospects: Mottola, who was picked fifth over all by Cincinnati in 1992, and the pitching coach Kyle Snyder, the seventh overall pick in 1999, by Kansas City. Neither made much impact in the majors.

“When I was playing, it was just, ‘Well, the good ones figure it out and the bad ones don’t’ — and I don’t believe that at all,” said Mottola, who was drafted one spot ahead of Derek Jeter. “I’ve seen too many guys get help from a certain guy, and it doesn’t have to be me. But everybody is reachable in a different way.”

Mottola encourages hitters to seek outside help in the off-season, hoping to learn new techniques from them. Lowe showed him how to use bungee cords in hitting drills. A few players like hitting foam balls from close range, to relive their Wiffle ball days — with purpose. (“That’s when guys had their best swings,” Mottola said.)

Snyder, meanwhile, is so close to Snell that Snell called him his best friend, and cited him as a primary reason for signing a five-year, $50 million contract extension this spring.

“Blake has willed himself to this point,” Snyder said. “I’ve had very little to do with it.”

Snell is a star, but the rest of the Rays are still largely anonymous. To compete, the Rays need a complete absence of mediocrity.

The Yankees recognize the same thing, of course, and have weathered a barrage of injuries because of quality backups. The Rays must hit harder, pitch more effectively — and, perhaps, believe more intensely.

“At some point, to make something of yourself in this game, you have to have an uncommon mentality,” Morton said. “You have to believe in things that aren’t necessarily even possible — or probable. The guys in here, the guys who do special things in this game, they don’t think like everybody else thinks. They don’t think normal thoughts.”

The Spanish artist with the museum in town would have been so proud.