The Retired Boys of Summer Play On

Senior softball leagues remain an essential lifeline for many retirees. I would know: My 83-year-old father is playing through the pandemic.

The Retired Boys of Summer were not going to let a pandemic — or a little rain — interrupt their game.

They had already endured a pause in their season, not unlike the ones most professional leagues have faced, because of a player’s positive test for the coronavirus.

So when the first official game of the new year arrived on Jan. 4, the roughly 90 players on seven teams of the Golden Years Senior Softball League were ready to go, drizzle be damned.

“I’m not as good as I used to be, but I’m alive,” my 83-year-old father, Sy Ellin, said as he wrapped a support belt around his waist like a corset. He has been playing for 60 years, 25 as an avid participant in the Golden Years league in Florida and with EMass Senior Softball in Boston. 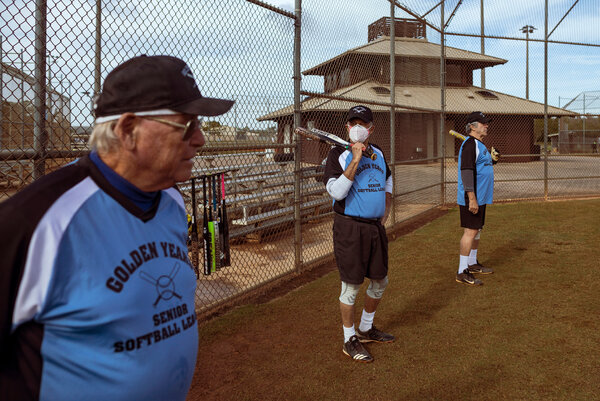 The virus may rage, but in senior leagues across the country, softball is an essential lifeline.

According to the International Senior Softball Association, there are 5,000 teams of players 50 and older in the United States, about 1,800 of them competing in tournaments.

Many of those tournaments have continued to draw dedicated athletes throughout the past year. In late January the World Tournament of Champions, co-sponsored by I.S.S.A. and played in Tampa, Fla., drew 172 teams.