In an era of shuttered stadiums, a solitary Real Sociedad fan sends scoring updates to his city with flares, preserving a tradition linking the soccer team with another era.

As soon as the ball crosses the line, Juan Iturralde is on his feet. He darts back inside his suite, heading for the door. He pauses only briefly, to snatch two bottle rockets from a plastic bag placed carefully, deliberately, in his path. Its location is strategic: Iturralde is, essentially, in the news business, and every second counts.

He bounds — as fast as his knees will allow — down two flights of stairs, clasping the fireworks by their stalks. He sprints out of Gate 18 at the Reale Arena, home of the Spanish soccer team Real Sociedad, and onto the street outside. He checks that the coast is clear, slips the first of his two rockets into his hand-held launcher, and breaks his story across San Sebastián’s night sky.

His news, this time, is good. As the first rocket shrieks above his head, Iturralde sets off another, another shower of sparks falling at his feet, another cloud of cordite writhing around his sleeve. Everyone in the city knows how to crack the code. One explosion means Real Sociedad has conceded a goal. Two signify that the home team has scored.

It has been that way in San Sebastián for more than half a century. Other than a short lacuna in the 1990s and early 2000s, the fireworks have accompanied every Real Sociedad home game since 1960, enmeshing themselves in the city’s sonic fabric, part of the soundtrack to thousands of weekends, interrupting countless conversations, bringing glad and glum tidings to successive generations of fans. 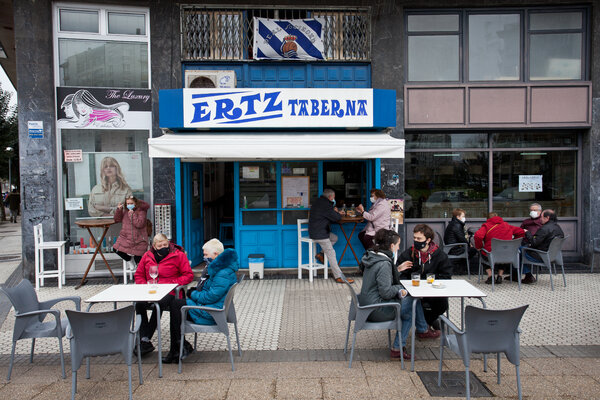 “It’s a big responsibility,” said Iturralde, who has served as cohetero — rocketman — since 2006. It is one he takes seriously. There have been no fans in the Reale Arena for a year, the stands silent in the age of the coronavirus pandemic. But he is there for every home game, armed with the fusillade the club has provided, ready to rush outside the moment a goal is scored to spread his word to the city.