The simple pledge that helped jump-start Rabbitohs back to life

After defeat at the hands of the Bulldogs last weekend, South Sydney's key playmaking trio of Damien Cook, Adam Reynolds and Cody Walker held an informal meeting that paid handsome dividends during a dramatic night at Suncorp Stadium on Friday.

With their top-four hopes sliding away amid a flatlining second half of the season, the halfback, five-eighth and dummy-half knew things needed to change at Redfern. They looked around at the quality of players in their squad and arrived at a conclusion that was simple, yet effective. 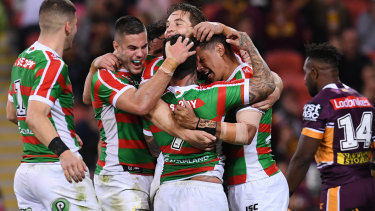 Reignited: Rabbitohs players celebrate a try during their dramatic win over the Broncos.Credit:AAP

Cook knew the senior players had to make something happen, not just hope for the best. When they did that against a Broncos side that fought until the death, they produced one of the best team tries of the season.

"My favourite moment tonight was when all three of us linked up and Cody scored," Cook said after the match. "That just shows we're all in sync and that's all we needed, we needed one game. It's a great game to build off.

"We felt like we had a good game against Melbourne, in areas, and the Bulldogs, credit to them because they played well, but we really let ourselves down. If we wanted to be a team that was a threat in this competition we had to start tonight [Friday] and that's what we did."

Cook came up with the play of the night when he chopped down Corey Oates in a classic try-saver just metres from his own line. It was as brave as it was perfectly executed. He said he just got in the way of the mammoth winger and hoped for the best.

"We were under the pump and they were flying," Cook said. "I just had to put myself in a position to make that tackle. He's a big body, such a danger to play against, he really gets teams moving forward. I just went in there and hoped for the best. I'm glad I did because I think we deserved to win tonight."

The Rabbitohs are no good things to scrape into the top four and have a difficult assignment to end the season, heading away to play the Warriors in New Zealand before taking on the Roosters to end the regular season.

It's a tough examination, but Cook preferred to see the upside, saying that if they could win them both they would head into the finals believing they were there to win, not make up the numbers.