HARTFORD — The Whalers have been gone from Connecticut’s capital city longer than they were in it, but for the first time in 21 years the team’s sweater will be worn in an N.H.L. game — when the Carolina Hurricanes host the Boston Bruins on Sunday.

The Hurricanes’ new owner, Tom Dundon, has been embracing the franchise’s heritage since last January, when he purchased controlling interest from Peter Karmanos, who had moved the team to North Carolina from Hartford in 1997. Almost immediately, the Hurricanes began selling Whalers gear at PNC Arena in Raleigh. In September, Dundon announced the team would celebrate a Whalers Night, which will happen Sunday, and would also wear Hartford sweaters on March 5 in Boston, 100 miles from the team’s old home.

In and around Hartford, there have been conflicted reactions to the rapprochement. Resentment lingers from the team’s move, and some people believe the new interest in the Whalers is tied to an opportunity for Carolina to sell merchandise.

“The jersey belongs to Hartford and the hockey fans in Hartford,” said Joseph Bajorski, 52, a real estate broker in Berlin, Conn., and a member of the Hartford Whalers Booster Club.

“That jersey is Hartford,” he added.

Much of Connecticut is united by an enduring affection for the team, which won only one playoff series (1986) and one division title (1987) in its 18 seasons in Hartford. (Five years after leaving Connecticut, the franchise reached the Stanley Cup finals; in 2006, the Hurricanes won the Cup.) 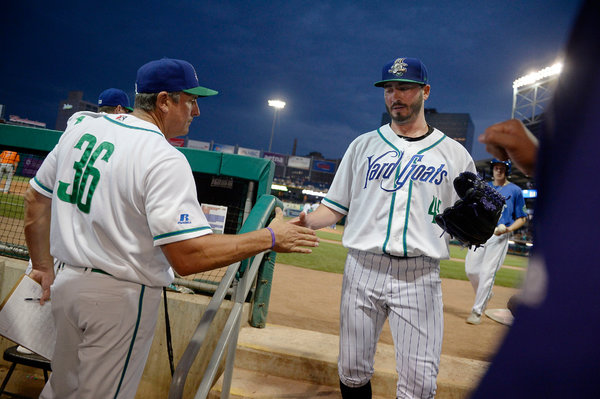 “Brass Bonanza,” which played after every Whalers goal, blares when the University of Connecticut men’s hockey team scores at what is now called the XL Center, where the Whalers’ 1986-87 Adams Division title banner still hangs, along with the franchise’s retired numbers.

After a local radio station, WDRC-FM, was sold in 2014, the new owners rebranded it as 102.9 The Whale, adopting a whale logo and the team's blue and green colors. The Rangers’ American Hockey League affiliate in Hartford was called the Connecticut Whale for a few years this decade. The name now belongs to the National Women's Hockey League team in Stamford.

The Colorado Rockies’ Class AA baseball franchise moved from New Britain, Conn., to Hartford for the 2016 season, took the name the Yard Goats and selected Whalers colors. During the last two seasons, the baseball team has held a three-day Whalers Alumni Weekend, with former players returning and the Yard Goats wearing hockey-style uniforms, featuring its mascot chomping on a hockey stick instead of on a baseball bat.

“Considering how the team was ripped out of the community, it only makes sense to pay homage to them,” said Tim Restall, the Yard Goats president.

In January, the state began offering commemorative Whalers license plates, with a portion of the fee going to the Connecticut Children’s Medical Center.

Most recently, the new Hartford franchise of the United Soccer League announced that when it begins play in the spring, its colors will be green and blue.

“That was probably the easiest decision we had,” said Bruce Mandell, the team’s chief executive. “These are really Hartford’s colors now.”

Much of the Whalers’ residual good will stems from their extensive community involvement.

John Forslund, who joined the franchise in 1991 as its public relations director and has been its television voice since 1995, called the Whalers “a model for the rest of the N.H.L. with the extent of their community relations. The players back then really dug into the community.”

“I really liked living there,” said Ferraro, now an N.H.L. analyst for Canada’s TSN. “The insurance industry was still big, downtown was vibrant, the restaurants were packed. Plus, a lot of the players were in the same stage of our lives, in our early 20s. I liked everything about Hartford.”

Bob Crawford played in Hartford for only three of his seven N.H.L. seasons, beginning in 1983, but he is among a dozen or so former Whalers who still live in the area.

“You could be somebody in Hartford; people knew who you were,” said Crawford, the owner of the Champions Skating Center in Cromwell and other rinks in Connecticut. “Hartford was big enough to be a world-class city but small enough so you could make a difference if you wanted to.”

The Hurricanes will auction off game-worn jerseys from Sunday’s Whalers Night, and some of the proceeds will go to Crawford’s skating center.

Richard Gordon, a Hartford businessman who became the controlling owner of the team in 1992 before selling it to Karmanos, remembered the civic pride the Whalers generated.

“Everyone had a vested interest in the team, kind of like how people in Green Bay feel about the Packers,” Gordon said. “Sometimes you don’t realize what you have until it’s gone.”

The New England Whalers began play in the World Hockey Association in 1972 and joined the N.H.L. with three other former W.H.A. teams in 1979, moving into Hartford’s 4-year-old Civic Center for Gordie Howe’s final N.H.L. season. Beginning in 1986, the team made the playoffs for seven straight years with players like Ron Francis, Kevin Dineen, Ulf Samuelsson and goalie Mike Liut.

“I felt we were on the verge of something good in Hartford,” Ferraro said.

But a series of bad trades beginning in 1991 stripped the team of its most popular players, including Francis. At the same time Hartford’s corporate base was contracting and interest in the UConn men’s and women’s basketball teams was rising. Soaring N.H.L. salaries exacerbated the team’s disadvantageous lease, and negotiations with the state, also in financial straits, for a new arena failed.

“The writing was on the wall,” said Bajorski, who listened to the Whalers on the radio growing up and was a season-ticket holder during the team’s last years in Hartford.

Karmanos announced on March 26, 1997, that he was moving the franchise at the end of its fifth straight losing season. The Whalers played their last game in Hartford 18 days later.

“It was heartbreaking,” said Brad Height, 38, who grew up a Whalers fan and now manages Higganum Wine & Spirits, where a Whalers flag flies outside. “I didn’t want to believe it even after the last game. It was sort of like losing a member of the family.”

On Sunday, the Whalers’ mascot, Pucky the Whale, will be at the game in Raleigh, and “Brass Bonanza” will be the Hurricanes’ goal song. Carolina will be in the vintage green uniforms the Whalers wore from 1985 to ’89 and again in the 1990-91 season.

Despite tweaks to the logo over the years and the introduction of blue as the team’s primary color in 1992, the upside-down whale tail atop a “W,” with the letter “H” hiding in the negative space in between, remains beloved by many.

“Outside of the Original Six, it’s the best hockey logo that’s ever been designed,” Ferraro said.

Whether or not a Whalers Night becomes an annual event in Carolina, the team’s grip on its former home most likely will not fade.

“When you say ‘Hartford Whalers,’ people smile,” Crawford said. “And that’s not going to change.”