Their Season Is Over, but the Knicks Are Back

As the dejected Knicks wound down the closing minute of their season on Wednesday night, the near-capacity crowd at Madison Square Garden rained cheers on them.

It didn’t seem to matter that the Knicks had been thumped once again by the Atlanta Hawks, or that they had lost their first playoff series since 2013 in a surprisingly noncompetitive fashion, four games to one. It didn’t seem to matter to the fans that one of the best defenses in the league was carved up by Trae Young, or that much of this team is unlikely to be back next season, since many are set to be free agents.

Asked what the biggest difference was between this season and last, RJ Barrett, the Knicks guard, put it succinctly: “A lot more winning. Winning was fun.”

This team’s overnight turnaround from 21-45 to 41-31 was one of the more remarkable stories of a turbulent N.B.A. season. And even though the Knicks collapsed in the playoffs, raising some new questions entering the off-season, this iteration was one that their fans could enjoy watching again. In the 21st century, that was something Knicks aficionados could only rarely say. 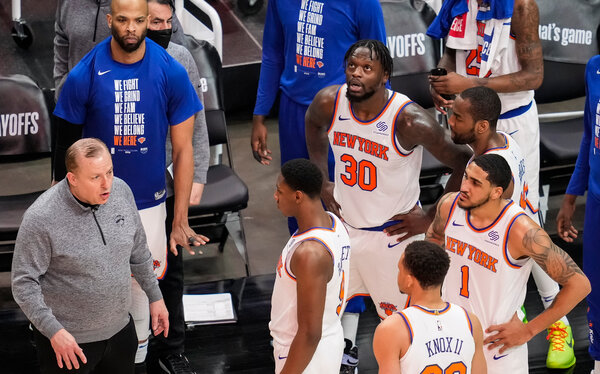 “I’m proud of what our team accomplished this year,” Knicks Coach Tom Thibodeau said. “Obviously, disappointed with the result tonight, and hopefully we can learn and get better from it. But I thought our guys gave us everything they had all year long.”

The Knicks confounded preseason expectations by earning the fourth seed in the Eastern Conference after many observers wrote them off even before the season began. But it wasn’t just that they won more games this season. It was the way they did it.

The Knicks were rarely the most talented team on the floor. They won on the back of a tough defense and cast of scrappy players who reflected their coach, Thibodeau. Their best player, Julius Randle, had been underwhelming a year ago, renewing questions about whether the three-year, $63 million contract he had received in 2019 was just the latest in a long line of ill-fated Knicks signings.

Instead, the 6-foot-8, 250-pound Randle reinvented his game under Thibodeau and adapted to the modern N.B.A.: He developed his 3-point shot while also improving his passing and defense. Doubts about Randle faded as he morphed into an All Star.

“We’re bringing a brand of basketball back that the city can be proud of,” Randle said, adding, “We have something to build on for the future.”

That is the most important takeaway from this season. The Knicks are a coveted ticket again, which means they may be more successful at attracting top free agents, a task at which the team has struggled for most of the last two decades. That change in perception alone could make this season a success, regardless of how the series against the Hawks ended.

The Knicks finally have something they have craved for years: They have built the ground floor of something. Under the team president Leon Rose and the coaching of Thibodeau, there appears to be an organizational direction and a sincere — at least, for now — commitment to long-term development over short-term thinking. There are promising young players like Immanuel Quickley and Obi Toppin. There are building blocks like Barrett and Randle. The Knicks also have multiple first-round picks in this year’s draft.

And, because of a handful of expiring contracts, the Knicks will have a great deal of cap flexibility. Several of this year’s Knicks, including Derrick Rose, Alec Burks, Nerlens Noel, Reggie Bullock and Elfrid Payton, will be free agents this summer — the result of a strategy in recent years to stack their rosters with short-term contracts.

To be sure, the Knicks have some important decisions to make. In many ways, the season that just ended was supposed to have been a bridge year. Instead, the team overachieved by making the playoffs, and then underachieved once it got there.

One of the first big calls will be deciding what to do about Randle, who turns 27 in November. As strong as he was in the regular season, Randle was abysmal against the Hawks in his first postseason, shooting 29.7 percent. This was his seventh N.B.A. season, but which is the real Randle: the one who grew into an All-Star during the season, or the one who vanished against the Hawks? And what now?

The Knicks must decide whether to tie up a large portion of their salary budget with a long-term extension for Randle and build the team around him, or to sell high as they did with Kristaps Porzingis, the last Knicks All-Star who excited the fan base.

“I told him I still do believe in him,” guard Derrick Rose said. “I’m going to ride with him to the end just like everybody on the team. Like, he got us here.”

The calculations only get more complicated from there. Should the Knicks give Mitchell Robinson, their shot-blocking center, an enormous extension, or go shopping in a thin free-agent year? DeMar DeRozan, who just finished a successful run with the San Antonio Spurs, and Kyle Lowry of the Toronto Raptors are two players who do seem to fit the Thibodeau mold. Kawhi Leonard of the Los Angeles Clippers could opt for free agency if the Clippers lose to the Dallas Mavericks in the first round.

Committing lots of money to the wrong players, though, is the surest way for a team to keep itself in N.B.A. purgatory, a fact that Knicks fans know as well as anyone. Draft picks can be squandered. Signings can go wrong. Injuries might derail a run.

But those worries can wait a day or two. For the moment, this season can be viewed as a refreshing change in direction for the Knicks. For most franchises, making the playoffs would be a small step. For the Knicks, it was a giant leap. They are back in the discussion.

“Who wouldn’t want to play for the Knicks or be in New York?” Rose said Wednesday night.

When was the last time the Knicks, or their fans, could say that and mean it?