There is only one sure way to become an eligible voter for the Baseball Hall of Fame: compile 10 consecutive years of membership in the Baseball Writers’ Association of America. A different group considers managers, umpires, executives and long-retired players, but since its founding in 1936, the Hall has always asked writers to be the primary judges for the game’s highest honor. The latest election results will be announced on Tuesday.

Yet not even the most experienced, well-sourced writer could understand the game as well as a player. What if voters came from the dugout instead of the press box? Perhaps, with their intimate perspective, players could more easily agree upon selecting the best of the best.

“I think they absolutely would come to more of a consensus,” said Ben Davis, a former catcher for San Diego, Seattle and the Chicago White Sox. “You know who the best guy in your league is. When you’re going through your game plan, there’s always one guy you will not let beat you. It’s the same for each team.”

Ryan Spaeder, an author and statistician, has been seeking such opinions for the last few years, inspired by a conversation with Kevin Youkilis, the former All-Star infielder. When Youkilis suggested that anyone with major league experience should have a vote for the Hall of Fame, Spaeder decided to poll as many as he could find.

As of Monday afternoon, Spaeder had gotten 76 players to participate in this year’s poll, from Hall of Famers like Carlton Fisk and Larry Walker to players with brief careers like Steve Holm and Bucky Jacobsen. In Spaeder’s poll, only three candidates reached the 75 percent threshold for induction: Barry Bonds, Roger Clemens and Todd Helton. 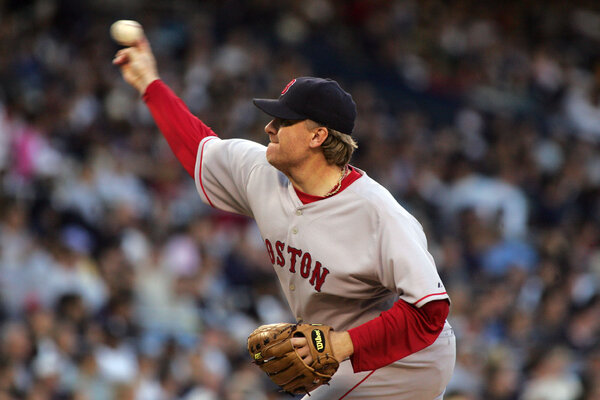 The early returns among the writers yielded a different, somewhat unlikely, choice: Curt Schilling, the power pitcher, postseason stalwart and vocal critic of the news media who has promoted the QAnon conspiracy theory. Among the 182 B.B.W.A.A. votes made public by late Monday afternoon — as tallied by Ryan Thibodaux on Twitter — only Schilling was polling above 75 percent, though Bonds (72.5 percent) and Clemens (72) were close behind.

Some voters have opted out of the process, citing the difficulty in applying the Hall of Fame’s character guidelines to players who used performance-enhancing drugs, especially in the era before testing. Some organizations, like The New York Times, the Los Angeles Times and the Washington Post, prohibit writers from voting for awards, believing that writers should report the news, not make the news.

Writers who do not disclose their ballots tend to be more selective, so most players’ support declines when the full results are released. Between the polls, though, the difference between player and writer opinions is not as pronounced as it seems.

No candidate reached 80 percent among either voting group. The candidates in the 40-49 percent range among writers (Gary Sheffield, Billy Wagner, Andruw Jones and Omar Vizquel) were grouped between 53 and 65 percent among players — better, but still short of the requirement for induction. Helton, the longtime Colorado Rockies slugger who played home games in a hitter’s paradise, got much more support from players than from writers, but he had also gained more new votes among returning writers than any other candidate and was polling above 50 percent in his third year on the ballot.

“Just like you can’t control who you play on the schedule, you can’t control WHERE you play when you get drafted,” Schilling wrote on Spaeder’s site. “He performed to a Hall of Fame level across an incredible career. He also gets far less recognition as a defender than he should.”

Fisk told Spaeder he would vote for Schilling, Vizquel, Wagner, Mark Buehrle, Torii Hunter, Andy Pettitte and Aramis Ramirez — leaving off Bonds and Clemens. Walker selected the maximum 10 candidates, including Bonds and Clemens, but two Hall of Famers — who asked Spaeder to remain anonymous — were stingier. One voted only for Helton, Vizquel, Scott Rolen and Jeff Kent, and another replied, “I wouldn’t vote for anybody on the current list of eligibility.”

Eric O’Flaherty, the former reliever, acknowledged being torn about voting for players tied to steroids, but said the widespread use of amphetamines also gave players an edge. Since voters have roundly ignored the use of those drugs — also known as greenies — he could not penalize players for using other performance-enhancers.

“I usually wind up feeling like the steroid guys should get in because I took a greenie once and felt like I could build a spaceship three minutes later,” O’Flaherty wrote, in explaining his ballot on Spaeder’s website. “I pitched that day, and I had an easy inning and would have gone 12 more innings if they let me.”

O’Flaherty also voted for Schilling, explaining simply: “he was really good at baseball.” No player addressed the specifics of Schilling’s controversial social-media presence, though only 57.9 percent voted for him, compared to 75.3 percent of writers.

Schilling himself voted for Helton, Jones, Kent, Rolen, Vizquel, Wagner and Bobby Abreu, providing an array of statistics to Spaeder and emphasizing the importance of defense, especially with Rolen and Vizquel.

“If defense matters, which it does way beyond what Hall of Fame voters consider, then they are both locks,” he wrote.

John Baker, a former catcher for the Marlins, the Padres and the Cubs, included five players linked to performance-enhancers — Bonds, Clemens, Sheffield, Manny Ramirez and Sammy Sosa — among his 10 selections. It would be naïve, Baker wrote, to assume that all current Hall of Famers were spotless.

“How do you think people played for like 20 years, chocolate milk?” he wrote, adding later, “Induct Bonds and Clemens, bring Sammy back to Wrigley (and into Cooperstown), and have a willingness to sit with the idea that context and nuance are important for growth and understanding.”

Baker called Bonds the greatest hitter who ever lived, pointedly noting that baseball was not integrated when Ted Williams began his career in 1939. Davis said the exclusion of Bonds was baffling.

“The fact that Bonds isn’t in just blows my mind, it really does,” he said. “You can say what you want about whatever he took, but he’s the best baseball player to ever walk the earth, period. It’s not even close.”

Plenty of writers share that opinion, but probably not enough for Bonds, Clemens — or anyone else, perhaps — to get the call of a lifetime on Tuesday.