The frustrated trainer of an excluded Cox Plate hopeful insists the decision to bar Trap For Fools from the weight-for-age championship was the "wrong" one, arguing lesser performed horses have snuck into the field in the past.

The Moonee Valley Racing Club committee used their discretionary powers to rule out Jarrod McLean’s ex-Perth galloper, which was controversially overlooked for the $5 million race minutes before the barrier draw on Tuesday. 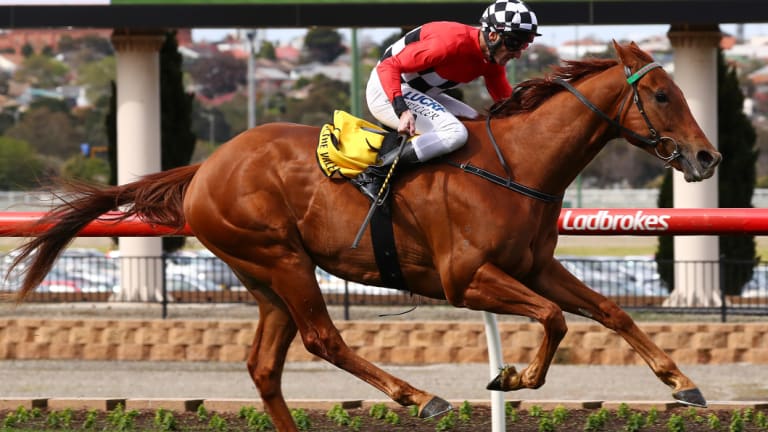 It left wonder mare Winx with just seven rivals for her tilt at an unprecedented fourth Cox Plate, while creating a vacuum of on-pace horses given Trap For Fools' pattern of racing near the speed.

Trap For Fools finished fifth, beaten less than two lengths by Winx in his last run in the group 1 Turnbull Stakes at Flemington, but has only tasted stakes success three times at listed level in Western Australia.

Having dodged the possibility of the smallest Cox Plate field in half a century, the MVRC ruled Trap For Fools' recent form didn’t warrant a place in Australasia’s most prestigious race despite attracting far less than the capacity 14 runners allowed.

"It's obviously disappointing," McLean said. "I respect and appreciate the committee have got a job to do, but I think they got it wrong. That's their call.

"Other than rider error at Moonee Valley the start prior [to the Turnbull Stakes in the JRA Plate] his last 15 runs have been pretty good I think. I think they've allowed worse horses previously to run in the race.

I think they've allowed worse horses previously to run in the race.

"If they're going on group 1 winners, I've got King's Will Dream here and he's a good horse, but he's obviously not a group 1 winner. And neither is Avilius.”

McLean juggles his job of training a small team under his own name with his larger role as Warrnambool foreman for Victoria’s most prolific trainer Darren Weir, who will saddle up last year's runner-up Humidor and beaten Caulfield Cup favourite King's Will Dream.

Trap For Fools was at the centre of a Caulfield Cup day controversy last week when stewards ordered the horse's scratching from the Coongy Cup.

They found the horse to be stabled on the day of acceptances at Weir's Warrnambool headquarters and not 9km away at McLean’s Yangery base.

Trap For Fools' Cox Plate exclusion was a bitter pill to swallow for owner Geoff Evans, who in 2004 had his Melbourne Cup qualified stayer Free At Last removed from the field by the Victoria Racing Club committee.

MVRC chairman Don Casboult made no apology for the decision to cap this year's field at eight runners, which will ensure each-way betting down to third.

"He wasn’t given a run in the Cox Plate, principally because he has won three listed races in Perth, but he has not won or being placed in a group 1, 2, or 3 race," Casboult said. "His best run here in Melbourne was in the Turnbull Stakes, which was not weight-for-age. He had a 2kg advantage.

"It was felt by the committee seeing that he wasn't a group placegetter that really didn't qualify him for the Cox Plate.

"It is very important for us to position this race as an elite weight-for-age championship of Australasia. That's why ultimately he was excluded.

"There may have been some advantages from a wagering point of view to add him to the field. [But] we didn't feel his performance had the merit to be in the field."

Shamus Award was sensationally elevated into the Cox Plate field in 2013 despite being a three-year-old maiden and turned in a performance for the ages, staving off Happy Trails and Fiorente to notch his first career win.

But prior to his win at Moonee Valley, he had been placed in the group 1 Caulfield Guineas and a further five stakes races as a two and three-year-old.

Asked about whether he was concerned about the lack of projected speed in the Cox Plate with Trap For Fools not there, Winx's rider Hugh Bowman said: "Maybe. He would be an obvious leader, but that doesn't mean he's going to put pace in the race.

"I didn't think he went very fast at Flemington when he led in the Turnbull. Just because he's a leader doesn't mean he's going to go fast. I'm not going to comment whether he should or shouldn't be there."