The 2018 World Cup round of 16 got off to a sensational start on Saturday with France’s 4-3 victory over Argentina.

While Kylian Mbappe was the star of the show, there were several other events which may not have quite as immediately caught the eye.

Here, Sportsmail takes a look at some of the incidental moments you may have missed while watching the action…

When Olivier Giroud needed treatment in the 35th minute, Nicolas Otamendi took advantage to get a drink, stealing the Frenchman’s water bottle.

Whether accidentally or deliberately – very impressively if the latter – the Manchester City centre back missed his mouth with a squirt of water, and instead managed to hit the Chelsea striker in the face. Needless to day, Giroud was thoroughly unimpressed. 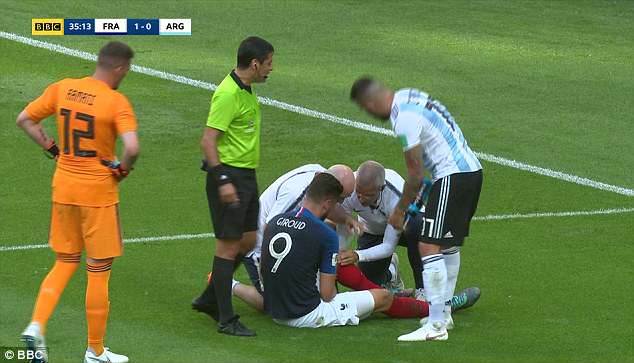 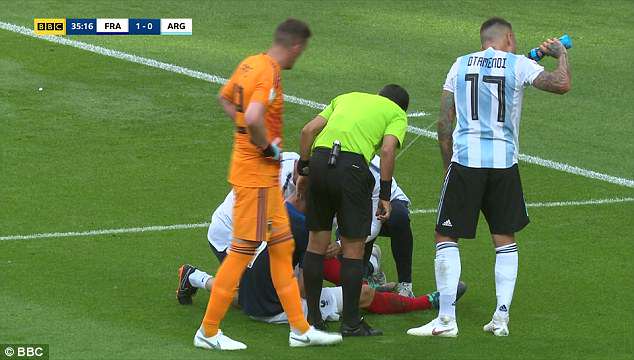 Whether accidentally or deliberately, Otamendi managed to squirt Giroud in the face 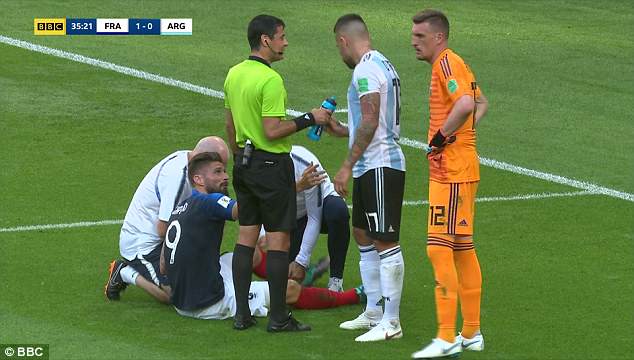 Giroud, needless to say, was thoroughly unimpressed with the Manchester City defender

Matuidi on the left?

France’s formation of 4-3-3, with three deeper midfielders supporting the dangerous attacking trio, has been a constant under Didier Deschamps’ management.

Whoever does FIFA’s formation graphics, which appeared before kick-off on the BBC, was apparently unfamiliar with this, instead showing France in a 4-2-3-1 setup.

What makes it truly inexplicable is that defensive midfielder Blaise Matuidi – not known for his searing pace and jinking skill – was placed out on the left wing. 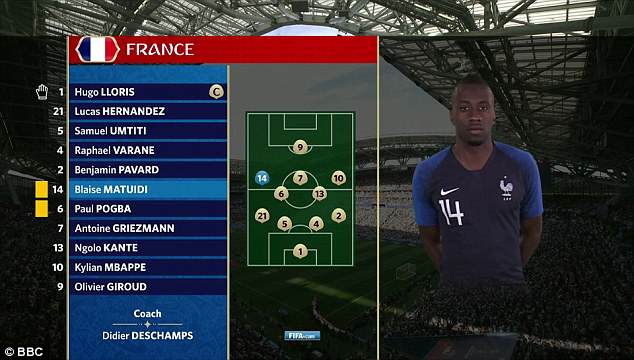 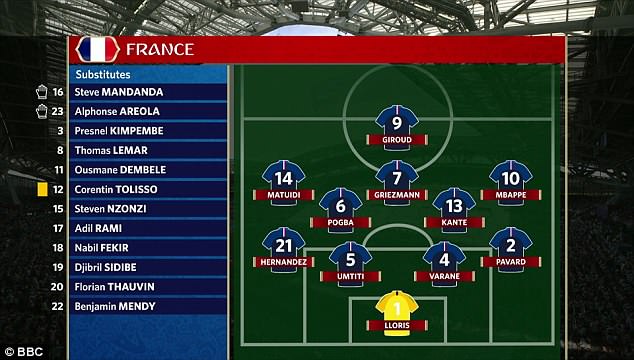 All change for Argentina (again)

Argentina manager Jorge Sampaoli has come under some serious pressure during this World Cup, with his side failing to impress throughout.

A large part of this seems to be that he doesn’t know his best team; for the France game, Gonzalo Higuain was dropped for Cristian Pavon.

This was the 15th time Sampaoli has changed his starting line-up – in his 15 matches in charge. Not something to counteract his current image as a clueless bumbler. 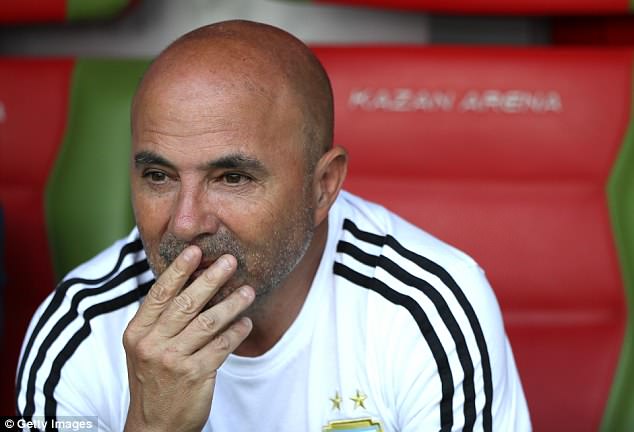 Paul Pogba can be dangerous from free kicks – but his 20th minute effort from 20 yards, which flew high and wide, left a lot to be desired.

Among those unimpressed in the crowd were the France international’s brothers, Florentin and Mathias.

When Paul’s shot went off target, Mathias – a striker for Eredivisie side Sparta Rotterdam – threw his hands up in the air, while Genclerbirligi defender Florentin was more stoic. 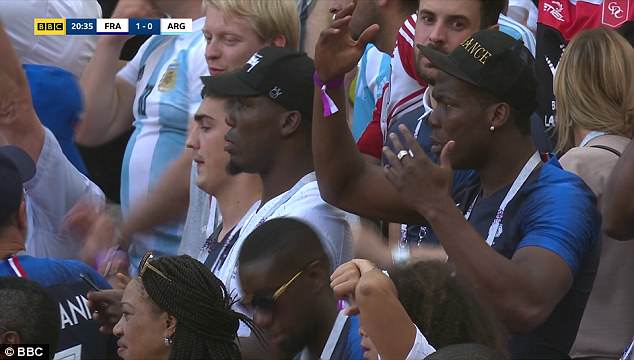 The TV cameras cut to Pogba’s brothers, Florentin and Mathias, watching in the crowd 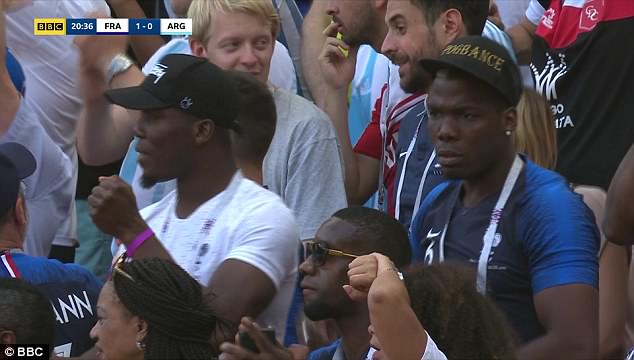 Fortnite is for all ages

Video game Fortnite has become a staple for many footballers to keep them occupied during down time in the World Cup, including Dele Alli and Antoine Griezmann.

However it isn’t just for younger people, as one older French fan in the crowd showed after Griezmann opened the scoring from the penalty spot.

The gentleman turned to the Argentina fans and did a jig with his fingers to his forehead in an L-shape – how the characters in the game celebrate victory.

It’s possible he doesn’t know what Fortnite is an was just copying Griezmann, who recently has adopted the celebration. Or he may spend his evenings on the PlayStation perfecting his skills. Who are we to judge. 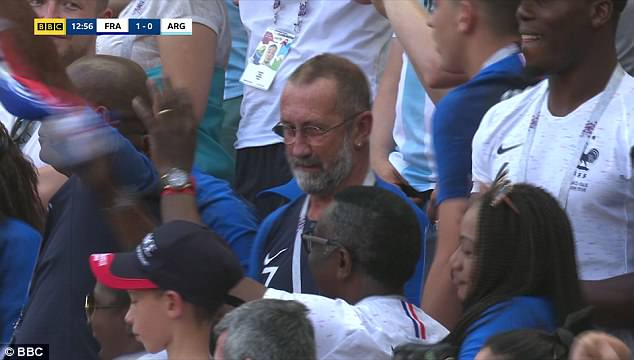 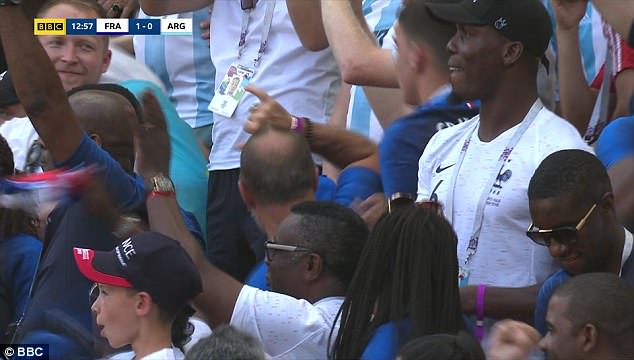 He put his fingers to his forehead in an L-shape and danced, as happens in the video game 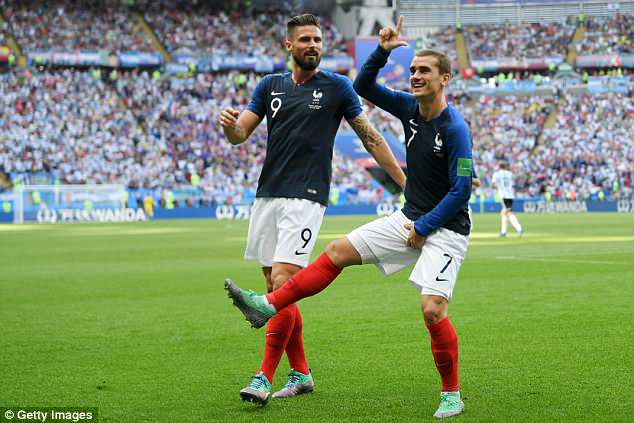 Goal of the tournament?

Angel Di Maria’s brilliant equaliser was certainly one for any aficionado of long range efforts.

It was the longest distance out from which a goal has been scored in Russia so far this month – from 30.2 metres.

Aleksandr Kolarov’s free kick for Serbia against Costa Rica (29.2m) has been bumped down to second place, with Granit Xhaka’s strike for Switzerland against the Serbs (29.1m) now in third. 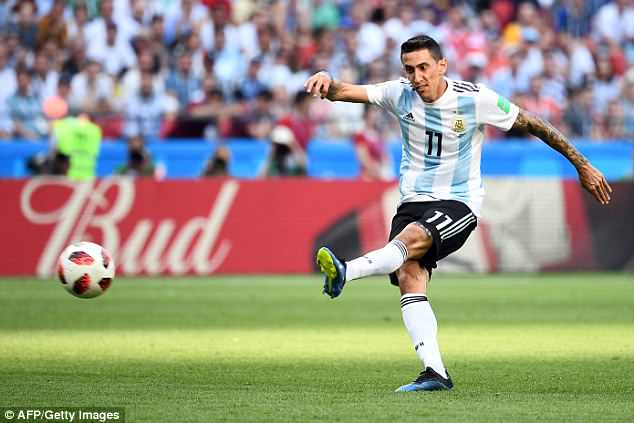 Will we see Lionel Messi at the World Cup again? He will be 34 when Qatar 2022 rolls around – even if he plays, he will no longer be at his peak.

Messi’s failure to score against France means that, unless he returns in four years, he will never have netted in a World Cup knockout match. 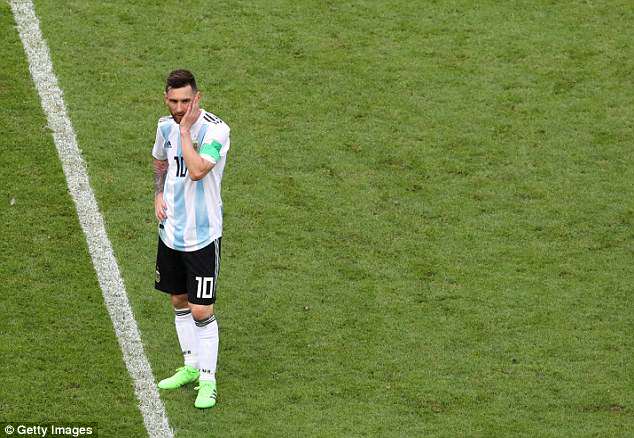 Will we ever see Lionel Messi at a World Cup again? He has never scored in the knockouts

Speaking of Messi, not everyone was sad to see the Barcelona and Argentina star go out of the World Cup – especially not Brazilians.

The picture itself shows Messi dissolving away, similar to the characters killed off at the end of superhero film Avengers: Infinity War. Spoiler alert. 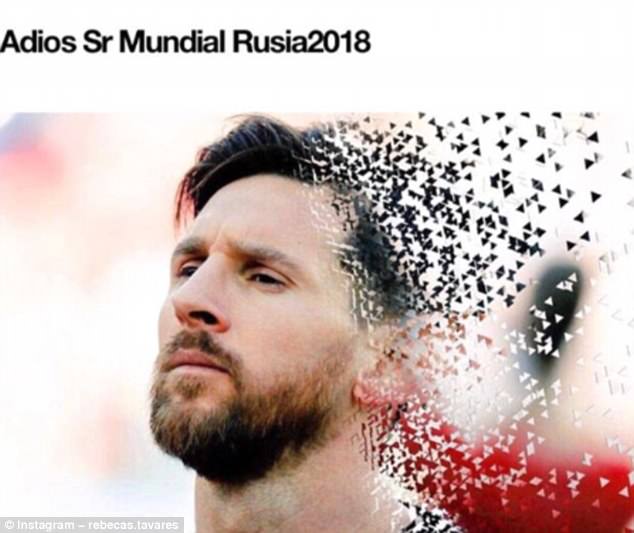 Fabinho’s partner, Rebecas Tavares, was gleeful that Messi’s World Cup is already over

Ronaldo’s fan club (including his family)

There were plenty of fans wearing the red and green of Portugal in Sochi – but in places it looked more like a meeting of the Cristiano Ronaldo fan club.

Flags, posters and models of Ronaldo were visible throughout the stands as supporters came up with creative ways of showing their love for the forward.

There was even one fan who wore special face paint with the Portugal flag on one side and the Real Madrid badge – Ronaldo’s club – on his other cheek.

There were no bigger fans of Ronaldo, however, than his mother Dolores and girlfriend Georgina, who were watching from a box with the rest of his family. 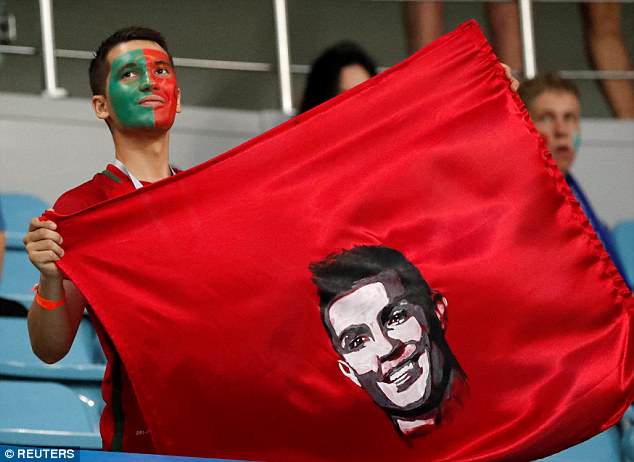 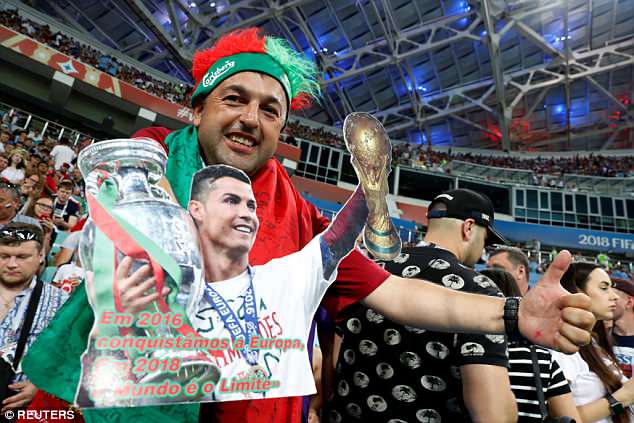 Flags, posters and models of Ronaldo were visible throughout the stands in Sochi 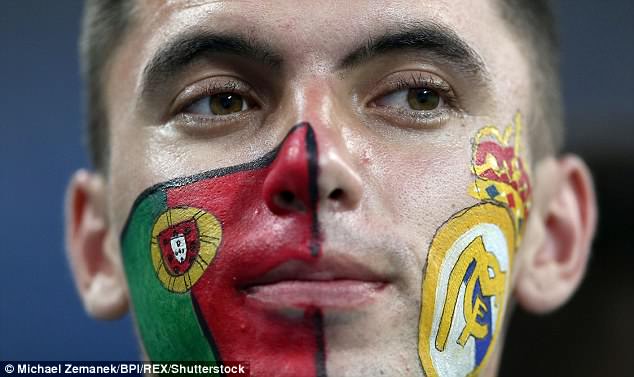 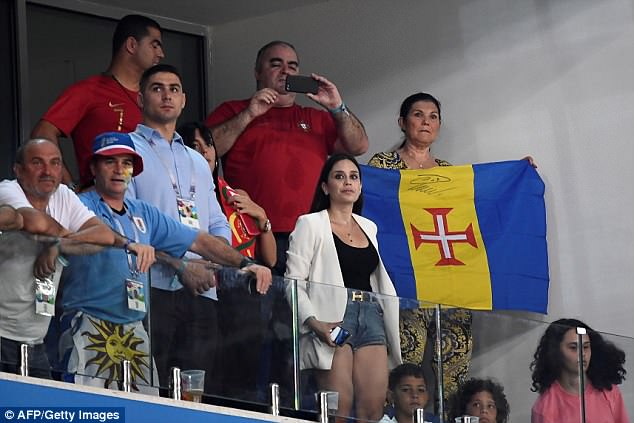 Shorts at the ready

Speaking of Ronaldo, one of his trademarks is to roll up his shorts before taking a free kick so we all get a look at his lovely thighs.

He took it to extremes here however, pulling them up so far it looked like he was wearing only boxer shorts – which may have been the idea.

Perhaps Ronaldo ended up restricting his movement however, as his free kick attempt hit the defensive wall. 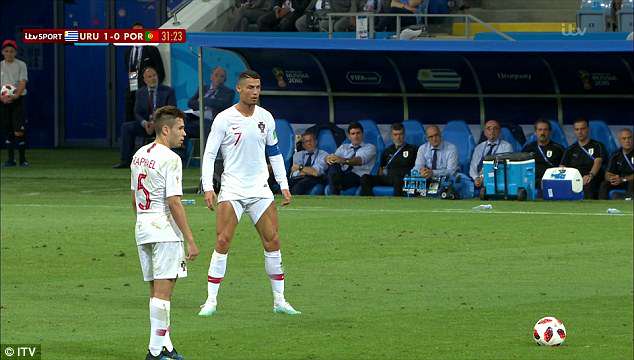 There are few more productive strike partnerships in world football than the one between Luis Suarez and Edinson Cavani for Uruguay.

Cavani opened the scoring by bundling Suarez’s cross over the line – 12 of his 45 international goals have now been set up by the Barcelona man.

A total of four World Cup goals have now come about through the combination of Cavani and Suarez – only Michael Ballack and Miroslav Klose for Germany, and Poland pair Grzegorz Lato and Andrzej Szarmach, have been more fruitful partnerships. 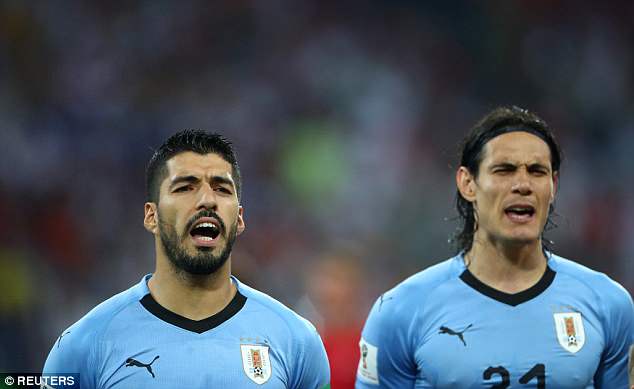 Cavani did not see out the game however, pulling up injured after 72 minutes with what looked like a hamstring injury.

The first man on the scene, oddly, was an opposition player in Ronaldo, who put his arm around Cavani and helped support him off the pitch.

Ronaldo got an ovation from the fans in the stadium for what appeared to be a charitable act – but with Portugal trailing 2-1, his actions were more likely borne of wanting to get the game back underway sharpish. 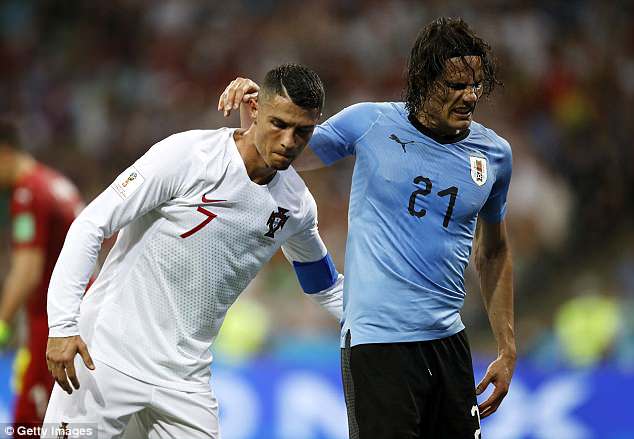 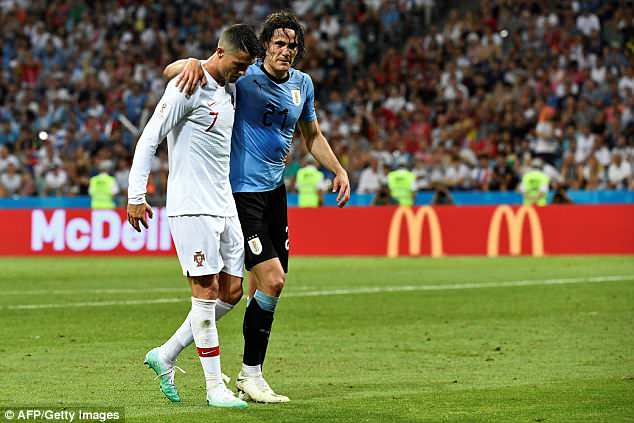