The Sunshine Coast Lightning hammered the Giants in last year's Super Netball decider, so the Sydney side could be forgiven for being distracted by thoughts of revenge in Sunday's preliminary final.

But the home side insists they are only interested in themselves.

“We know we can [win],” defender Kristiana Manu’a said. “When we’re all firing and we’re all playing to the best of our ability, we’re unstoppable.” 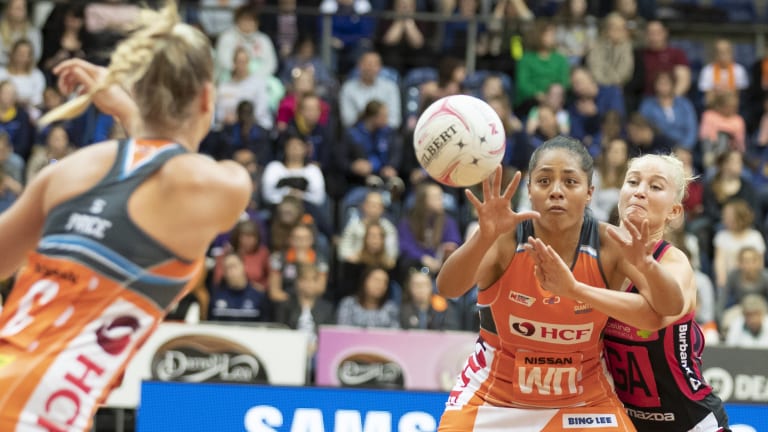 Confidence: Kristiana Manu’a says Giants believe they are unstoppable when they execute their game plan.

“This week it’s not about Lightning – even though we have studied them closely – it’s about sticking to our game plan.”

It's the team-first mentality embedded in the Giants' squad by coach Julie Fitzgerald, who is in her 20th finals campaign at the top level.

Fitzgerald believes her side has an effective mix of experience and youth that can deliver a premiership.

“I think we are pretty aware of what we did wrong [against the Fever in the major semi-final]," Fitzgerald said. “It’s more a matter of addressing that and making sure it doesn’t happen again.

“I think we’ve got 10 players here for which there is no settling for second best. We want to win a title.”

Fitzgerald has instilled a closeness between her players, but Manu’a says there is no room for complacency.

“Even though we get along and we’re friends, we’re not afraid to tell each other what we need to work on – and what we’re good at as well,” she said.

“That’s makes us unbeatable; knowing we can get better.

“I think it gives us confidence and I think we know in ourselves and in each other that we can [win] – and bring that belief and that confidence.”

Manu’a says the Giants are still evolving, making it difficult for teams to prepare for them, but she admits the Lightning are strong in all thirds of the court.

"The way [Lightning] played last week against the Firebirds, I mean, they played outstanding,” she said.

“For us, it's just to go in with the confidence and don’t take that [loss] last week [against the Fever] as a knockback, but as an opportunity to have another crack and get out there and play.”