Thorn says Salakaia-Loto is ‘in a good place’

Brad Thorn has backed a rejuvenated Lukhan Salakaia-Loto to be among the men to lead a depleted Queensland on their tour of South Africa.

The destructive flanker was one of the side's best in a 24-12 defeat of the Stormers on Friday, taking them to 3-4 ahead of matches against the Bulls and Sharks. 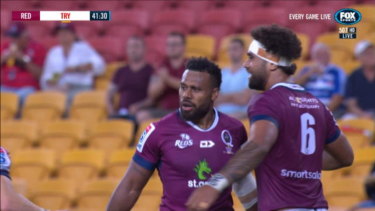 Queensland did all of their scoring in the second half as they disposed of the Stormers to claim the victory.Credit:omnisport

It continues Salakaia-Loto's heartening return to the game after his step-father's sudden death last year led him to step down from Wallabies duty after an emotional September Test against Argentina on the Gold Coast.

His Reds coach lost his father when he was 19 and revealed post-game that he had drawn on that experience to help the 22-year-old bounce back.

"Obviously last year the loss of his dad, I can relate to that, a similar thing happened to me at the same age," Thorn said.

The former rugby league talent legally changed his name from Tui to honour his late father and has returned to Ballymore in 2019 with a renewed focus.

"It's a tough thing that happened with his dad," Thorn said.

"He had grieving time, had space, got in here (in preseason) and … when you're in good nick you feel good, you're mentally in a good space.

"I thought he was outstanding (on Friday), just enjoying his rugby."

Queensland will be without winger Filipo Daugunu (suspected broken arm) for the South Africa trip, while centre Jordan Petaia (foot) is out for the season.

Fellow back Chris Feauai-Sautia (hamstring) missed Friday's game but is a chance of being fit to fly.

Australian under-20 representatives Harry Wilson, Fraser McReight, Isaac Lucas and Jack Hardy will all remain in Australia on international duties.

Most significantly though, captain Samu Kerevi had planned to be rested ahead of the World Cup, which would leave a side thin on midfield options without one of the competition's form players.

Thorn admitted he hadn't done the sums yet on who would or wouldn't be on Sunday morning's flight.

But he backed Salakaia-Loto and lock Izack Rodda, who also lost his father at the start of this season, to be among the men to fill the void.

"If we make that decision to rest (Kerevi) then it'll be a hard guy to fill," Thorn said.

"But that's one of the cool things about the team; it's not just one guy (leading)."