Alex McKinnon was the first person Latrell Mitchell thought of as he laid flat on his back at Allianz Stadium, having heard a "massive crunch" in his neck.

Mitchell was taken from the field on the back of a medicab on Friday night and being fit for next Sunday's second State of Origin match was the furthest thing from his mind. 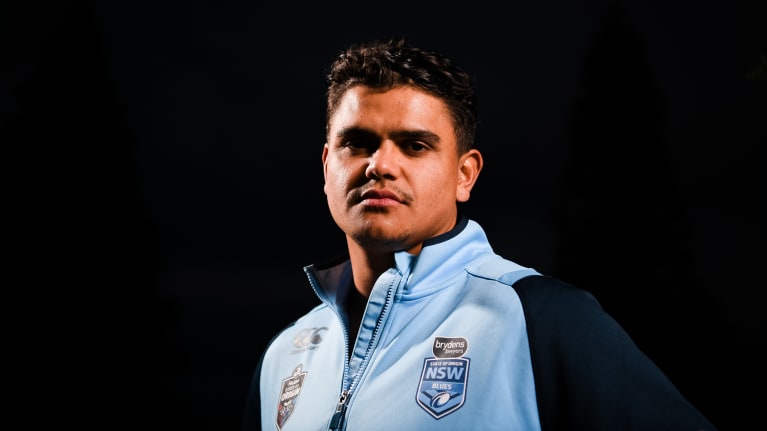 Relieved: Latrell Mitchell at the Blues training camp at Coogee on Sunday.

The Sydney Roosters centre, who turned 21 on Saturday, feared he may never walk again.

McKinnon, the former Newcastle Knights forward who was left an incomplete quadriplegic after a tackle in 2014, was also the first person who came to mind for Nathan Cleary, the man who accidentally collected the neck of his NSW teammate.

"I was thinking 'is my career over?' I wasn't even 21 at the time and I went into panic mode,'' said Mitchell, as he joined the Blues' pre-game camp at Coogee on Sunday.

"I thought of him [McKinnon] straight away. I remember when he went through it. I thought, 'is this me now?' I got real scared.

"Everything was running through my head at the time. I was a bit emotional when I was laying there waiting for that stretcher to come out.

"I felt like, 'am I ever going to play again? Is this the end?' I can only imagine what my Mum and Dad were feeling.

"What I felt was a massive crunch. I had no sensations down my legs and arms so I started [trying to] move them. There were good signs then [when that happened].

"I was a bit light-headed and stiff at the time, I was struggling to breathe. I reckon I could have walked but they said 'no, don’t risk it'."

Scans revealed Mitchell had suffered a torn ligament in the neck.

There was a touching moment after the scare when NSW teammate Tyrone Peachey, an opponent on the night with the Panthers, used his time in the sin-bin to cross over to the Roosters sheds and check on Mitchell's well-being.

For Mitchell, putting his neck into a tackle will be a physical and mental challenge, with his first training session this week to be on Tuesday.

Cleary could joke with Mitchell at the team hotel on Sunday, but he felt awful 48 hours earlier.

"I messaged him after the game to see if he was all right. He said he was 'sweet', so it made me sleep easier," Cleary said.

"It's a scary thing, especially neck injuries. You only have to look as far as Alex McKinnon. It's a really unfortunate thing and you don't wish it upon anyone."

NSW coach Brad Fittler was at Allianz Stadium when Mitchell's Roosters smacked Penrith 32-6 and also feared for the youngster's welfare as those few minutes on his back turned into an eternity.

Fittler played in a match with Englishman Phil Clarke, who broke his neck during a game for the Roosters, and was well across McKinnon's career-ending game.

"I was right behind the tackle and the amount of energy [Mitchell] puts in while he's in that position, you can see why it scared him," Fittler said.

"It's all or nothing the way he throws his body in. If something happens like that it's going to be dramatic.

"The other boys are ribbing him because he got carried off. He's all good.

"Once he moved his hands it made you feel a little bit better, and once you saw all these different little things … the footy goes away for a while and you worry about their health.

"We'll obviously discuss [the mental challenges] during the week. He's in. We'll be training on Tuesday and the stiffness is the thing that's going to get in the road the most. Obviously the demons are hard to train against. We'll get medical advice."

Mitchell was brilliant in game one and refused to be put off his game by the niggling of Queensland centre Will Chambers.

Neither Fittler or Mitchell expected Chambers to cross the line when it came to his neck.