Three men and a baby: Roosters could be without $4 million of talent

Three men and a baby could hold the key to the Roosters chances against the Gold Coast as the Sydney club faces the prospect of having $4 million worth of talent sidelined on Sunday.

Captain Boyd Cordner won’t play against the Titans and coach Trent Robinson is also likely to rest fellow Blues James Tedesco and Latrell Mitchell from the Cbus Super Stadium encounter. The Roosters are already without the suspended Victor Radley and the injured Dylan Napa, while Cooper Cronk could miss the match to be at the birth of his first child. 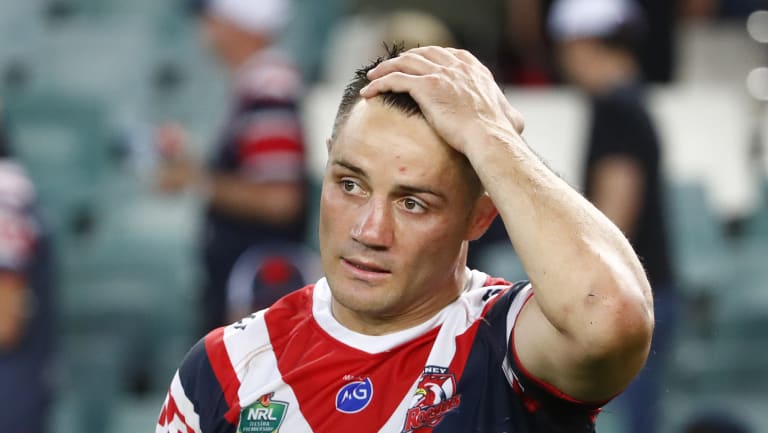 Expectant father: Cooper Cronk could be a late Roosters scratching.

Cronk’s wife, Tara Rushton, is expecting this weekend and young gun Sean O’Sullivan is on standby to make his NRL debut.

O’Sullivan was set to be the Blues pivot for the under-20s State of Origin game on Wednesday, but the Roosters pulled him out in case he is required on Sunday. The teenager, the son of former tri-colours recruitment boss Peter O’Sullivan, made his way through the grades at Penrith, but was released after getting stuck behind young halves Nathan Cleary, Tyrone May and Jerome Luai.

O’Sullivan was one of the stars for NSW Residents in their 36-20 win over Queensland Residents last month. Combining brilliantly with Cronulla’s Kyle Flanagan in the halves, O’Sullivan scored a try to set up a commanding 30-0 halftime lead. It wasn’t the first time he left NSW Residents coach Shane Millard impressed.

“I first ran into Sully when he played for Penrith in an SG Ball grand final against us when I was coaching the Steelers,” Millard said.

“After they beat us, they shook hands and did the presentation. Then Sully, who was just 17 years old, walked into our dressing sheds, shook mine and Shaun Timmins’ hand and ‘said thanks very much, bad luck’.

“He then shook all the players’ hands again and thanked them for a great game.

“For a young bloke to do that, that just doesn’t happen any more. It was pretty impressive and I’ve always watched him from afar since.”

O’Sullivan was called into the Residents team at the last minute after Bulldog Lachlan Lewis pulled out to be on standby for NRL duty.

“I’ve found Sully to be a terrific young bloke, he knows his footy inside out,” Millard said.

“I put Sully in and he was outstanding. He and Flanno were impressive in all our meetings and Sully ran the team perfectly.

“He helped put the game plan together and then his execution of it was second to none.

“He’s just a great young bloke to have around, I really enjoy his company.”

The Roosters face a Gold Coast outfit coming off an embarrassing 34-0 home loss to Brisbane last weekend. Cordner was never going to back up after a calf injury almost prevented him from taking part in Origin III, while Tedesco and Mitchell have also endured heavy workloads due to the interstate series.

The Titans clash will be a good test of the Roosters’ depth if most of their big guns aren’t available.

The Roosters sit in sixth spot and need to win to remain within touching distance of the top four.

Millard is confident O’Sullivan will take his chance at NRL level when it comes.

“The football side of it, in terms of the game plan and getting the side around the field, that will be no problem,” he said.

“He’s a real student of the game. It will be interesting to see how he handles the pressure from the inside, the line speed and the lack of time you get with the ball at NRL level compared to reserve grade.

“Robbo’s obviously has got a lot of faith in him and I don’t disagree with Robbo.”