Introspection has been a theme at the Waratahs over the past week but they will have taken note of three names on the Blues team sheet for the must-win game at Brookvale on Saturday night. 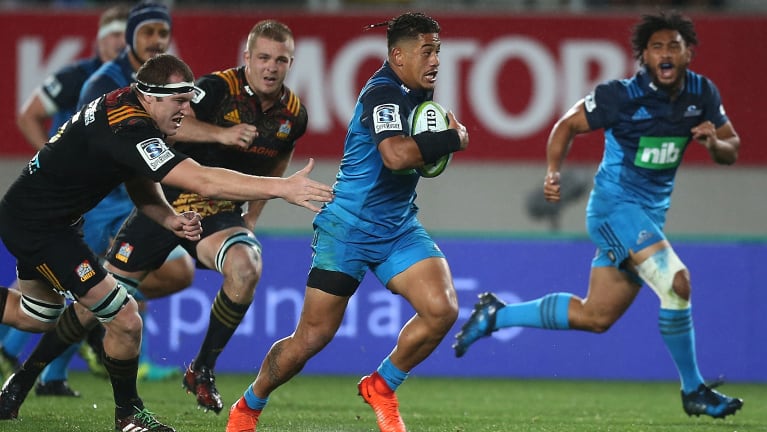 Key return: Augustine Pulu is back for the Blues.

Jerome Kaino, Patrick Tuipulotu and Augustine Pulu come back into the starting side and their presence was probably one reason why Waratahs coach Daryl Gibson was waspish when asked on Thursday about the Blues being a soft target for the Waratahs.

We shouldn't go overboard about their impact.

Kaino has been hindered badly by injuries this season, they've probably affected his ability to train and in the heavy loss to the Sharks in Auckland in round seven the visiting Springbok Jean-Luc du Preez was the baddest man on the paddock.

Du Preez smashed through tackles, hammered ball carriers and generally did all the things Kaino is known for. Kaino is now 36 and not immune to the limitations that come with age.

Tuipulotu is enigmatic. For all his size and power he has never been able to consistently deliver dominant performances and is at risk of missing the first All Blacks squad of the year when it is named on May 20.

If the All Blacks only carry three second-rowers and Tuipulotu is in a race for the third spot with Scott Barrett he'll probably lose it. Barrett was exceptional against the Brumbies last Saturday with his ability to ball-play at the line – in fact, with his quick hands he really isn't too far away from his brothers Beauden and Jordie in his ability to put players through holes.

But Pulu is a threat. The Blues captain also looks unlikely to make the All Blacks but he is proud, ultra physical and presumably with some pent-up frustration to get rid of after an injury layoff. Pulu is one man the Waratahs will really have to look after.

It's no secret that the Blues No.10, Stephen Perofeta, has struggled with his decision making over the past month so don't be surprised if Pulu tries to take some of the pressure off him with his direct running.

Pulu – particularly from first phase – runs like a crash-ball midfielder. In fact, this is how he sustained his ankle injury against the Chiefs in round three, smashing into Chiefs halfback Brad Weber and No.10 Tiaan Falcon as he attempted to smash his way to the try line.

That particular play was just Pulu all over – very little concern for his own physical wellbeing and confrontational. He may not have the nuances of other Kiwi halfbacks such as Aaron Smith, but he does turn the game into a battle of wills and asks the question: "I'm coming and what are you willing to do to stop me?"

Here, the defensive performances of Jake Gordon and Bernard Foley are going to be crucial.

Of course, an openside such as Michael Hooper will offer the Waratahs No.9 and No.10 some assistance, but even with Hooper's pace the Blues can still create room for Pulu off scrum or lineout.

From the scrum, No 8 Akira Ioane offers such a threat with his own running game that it can 'hold' Hooper long enough to give Pulu a chance to run, and Ioane is skilful enough to distribute to his halfback.

And with a relatively tall lineout with four legitimate jumpers the Blues have the ability, if not always the accuracy, to suck in numbers to defend the maul and again work for some room for Pulu.

Defending those inside channels is going to crucial for the Waratahs because the Blues' biggest threats are from No.12 inwards. Their wings haven't scored a lot of tries this year, in part because their back three options have been hit hard by injury and Rieko Ioane has been used in that inside-centre position.

The Waratahs have some opportunities in attack. Young Blues right winger Tumua Manu is not a tall man, which brings the Israel Folau crosskick into play, and their lack of a true fetcher should mean that the Waratahs can build phases on attack.

However, with Pulu back and pressure in New Zealand to maintain the country's winning streak against Australian sides they are likely to get direct and bring some aggression to the contact.

The Waratahs are favourites but Gibson is right – it won't be easy.